Budapest 4: A little louche, but fun 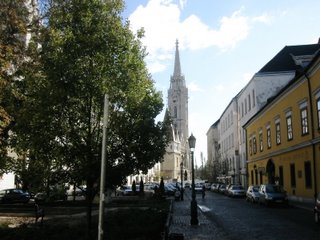 THIS IS HOW YOU CAN spend your day in Budapest:

Up a little before eight to check out CNN’s fourth reprise of the news. Nancy Pelosi, we’re proud of you.

Breakfast: a big bowl of granola with chocolate chips in it and two cappuccinos from the push-button machine on the hotel breakfast-buffet table. There are two of these machines, and this morning for the first time the one I’ve been using didn’t work, so I used the Nescafé machine next to it. The result was virtually undrinkable. Fortunately the waiter poured a pitcher of water into the other one, Dallmayr it’s called, and I could overcome the Nescafé taste with what I’ve been drinking these mornings; machine-made but acceptable.

By Metro then across the river — under the river, in fact — to Buda for the first time. Until now we’ve been in Pest. You’ve seen how we’ve felt about Pest: re-reading these quick accounts, we seem to have reservations; to be less than completely besotted with the city. Today I finally threw off all these reservations and simply gave in to the experience, and it helped that we started the day on the other side of the river.

We did that by first visiting a church which was closed, of course; and then visiting a promising covered market which had been turned into a shopping mall upstairs, a supermarket downstairs. (But, as was pointed out to me, the result was to save the structure from demolition. And the project suggests another: perhaps one day supermarket buildings in our own country will be preserved from destruction by converting them into covered markets.)

Then we walked up the Fö utca — I do love these street names — to leave a reservation for dinner tonight at Kacsa, pronounced Kotcha, which means “duck,” on the corner of Kacsa ut. For six-thirty, we said, knowing it was an absurdly early hour, but we had our reasons. And then I asked the host if there were another restaurant we should try in Budapest — it’s a ploy that sometimes works. We’re the best restaurant, he said. Yes, I said, but where might we eat tomorrow? We’ll still be the best restaurant tomorrow, he said.

Then we walked back south a few blocks and then turned southwest to climb the hill to the old city, up flights and flights of steps — I have no idea how many they eventually were; I usually count steps somewhat compulsively, but neglected to this time, out of pure joy with the day, the air, the weather, the trees above us, and the quiet. Behind us was the Danube; across it, the unbelievably gothic Houses of Parliament; on it and spanning it, the anchored tour-boats and the series of bridges.

Up and up we climbed, stopping to sit a minute or two on a bench, nodding to a young woman pushing a baby-stroller, nodding again to a fellow with a number of plastic bags and baskets of domestic items — he seemed to live on one of the benches. Finally we reached the top, a sort of castle surrounded by walls easily penetrated and then revealing a village of two- and three-storey buildings housing shops, restaurants, little museums, perhaps an apartment or two, all in neat repair, painted in fetching pastel colors and facing streets whose sparse furnishings of street-signs and the like could, or can, easily be struck should anyone want to shoot a movie here.

The effect is a bit unreal — hyper-clean, unnaturally calm and attractive. But it’s pleasant as hell, and a contrast with what we’ve been dealing with on the Pest side of the river — a big city full of traffic, run by internal combustion engines lacking the anti-smog devices we’re used to, and endlessly cluttered with signs, advertisements, sculpture, electric wires, lamps and lamp-posts, streetcar lines, and block after block of repairs involving scaffolds, wheelbarrows, piles of sand, paving stones, bricks, fences, and the like.

We visited the Matthias Church, a magnificent building contrasting greatly with the St. Stephen Basilica across the Danube. The Basilica is only a century or so old, Victorian-baroque, stuffy in its stony way; the Matthias Church has Gothic bones under Art Nouveau clothing, for it was entirely painted inside in the late 19th century with geometrical patterns and representational figures, and is marvelously lit by a combination of stained-glass windows worth comparing to Chartres and clear glass windows cunningly directing sunlight into the interior.

We had tea and pastry at Ruszwurm, the best pastry in Budapest I’d been told, and my sour-cherry strudel was in fact absolutely delicious (though Lindsey’s Dobos Torte wasn’t the best she had tasted). We walked back past the now closed restaurant museum I mentioned the other day — I mean past its previous site, a fine 18th-century hotel — and then caught a series of buses down-river to the other end of the old city of Buda to investigate the famous baths.

Our first choice, the Rudas gyógyfürdö (God, what a language), was off-limits unless we were bathing, so we walked on to the Hotel Gellért, stuffy and uninviting, and then to the adjacent Baths, where for 800 forints apiece we could walk around the lobby and peek into the capacious room where the main swimming pool was to be seen. There it was among its pillars and marble, about the size of the Berkeley YMCA pool but considerably more sumptuous, with a score or so men and women slowly moving counterclockwise around the perimiter of the pool.

We looked at the Soviet-realism statues of female nudes, done in the 1960s and apparently celebrating the ideal feminine tractor driver; and we walked upstairs to look at things from above, and then back down to take another look from that level; and then we walked across the Szabadság Bridge — a handsome Paris-green steel affair that might have been designed by Gustav Eiffel — to the huge Central Market, where we had a late lunch at a workman’s cafe upstairs.

I had a plate of dill pickles and a glass of prune schnapps; Lindsey had a plate of potatoes and a small bottle of water. It was all quite delicious and I’d do it again in a minute.

We went home to the hotel for a short rest and then set out again. Dinner at Kacsa was, well, mixed but good. It’s a self-absorbed restaurant. The bar cart came by first, and though Gordon’s gin and Martini & Rossi dry were in evidence, along with olives, I bypassed my Friday Martini for another prune schnapps — this one much tenderer and friendlier. Then I had pheasant-stock broth with a goose-liver-filled dumpling floating in it, and then grilled duck with a rice timbale, a single steamed potato, and a glass or two of decent local Merlot tasting as if it had a fair amount of Cabernet sauvignon in it.

During dinner we were serenaded by a violinist and a pianist — csardases, but also The Yellow Rose of Texas, and The Tulips of Amsterdam, and Oh Susanna, and bits and pieces of many other things. The violinist mentioned to me, in an undertone, without a moment’s hesitation in his bowing, that he had a CD if we wanted to buy it.

And then we took a cab to the Operetta House, only slightly larger than the Opera House — seating 1400 or so, I’d say — to hear a short one-act “operetta gala,” a succession of solos, duets, dance routines and the like from German and Hungarian operetta of the 1920s and ’30s.

I dearly love this music; it is among the earliest music I recall hearing, from 78 rpm recordings my parents had before World War II. Gypsy Baron, Countess Maritza, Fledermaus — it’s all beautiful. There were a dozen dancers and another dozen singer-dancers, and they did all the old routines, Charlestons, shimmies, vaudeville stuff, sentimental love-songs; and a send-up of the Three Tenors.

What a contrast with the previous night’s Mayerling! That had been neurotic, convoluted, stifling; this operetta was healthy, direct, and fresh. Sex and Life is so much more attractive than Sex and Death, I always think. And then the music is so much more engaging than Franz Liszt’s. I sang along, internally for the most part, and snapped my fingers quitely, and called Bravi to the tenors; and hummed Du bist mein herz allein to myself in the cab home; and we had a last beer, and so to bed.
Posted by Charles Shere at 3:44 PM