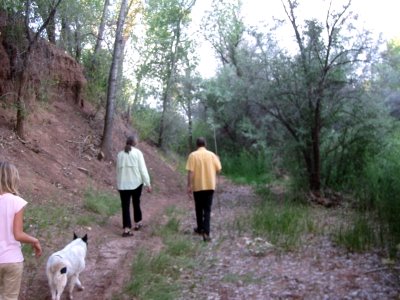 RESONANCE IS AN OVERUSED word, and that's too bad, because I do like resonance. I like the kind that set in when, a week after taking a morning walk along the Truckee River in Reno, we took an evening walk along the Rio Galisteo, a thousand miles away.

"Bosky" is an underused word. Now that I'm home, almost two weeks after that evening walk, and have my books about me, I can tell you it's from the French bosquet, "grove." There doesn't seem to be a current noun form of the word in English: all we have is "thicket" and "bush" in the collective sense. The former seems too specifically local a word, referring to s single isolated batch of shrubbery; the latter is too specific in the other direction, suggesting Australian or South African outback.

The Spanish language has bosque, whose pronunciation is so close to "bosky" that I doubt my etymological dictionary. I think it's Spanish, not French, that reinforces the American use of the adjective.
Maybe we don't have a noun for the thing because there's something in us that doesn't like the thing. The English seem to turn bosks into lawns and topiaries; the Americans send in sheep and cattle to munch them into extinction.

Whatever the case, our evening walk took us through what Pat called the bosque, what I'll always think of as the Bosque Galisteo. The river's pretty low, of course, or was two weeks ago -- I hear New Mexico got quite a bit of rain as soon as we left, a week ago. But there was water; we Californios would call it a creek; and it was set about with cottonwoods and, I think, alders, and lots of bushy plants unknown to this botanical illiterate; and it was quiet. All of Galisteo is quiet, of course; there's not a lot happening here of a public nature: but down in this ravine, a sort of common area running along behind many of the houses, stray wind-borne sounds were cut off; there was nothing to hear but our own footstes, our conversation, an occasional insect of bird, the occasional murmur of a rill.

The river must make a wide curving sweep here, for on one side there's a bluff cut into the sandy-clay bank, the river has cut about fifteen feet down into this mesa. Henry and Isabel couldn't resist this challenge and climbed up to run along the edge.

Another resonance: I recalled seeing a Navajo Indian run up the side of the Canyon de Chellly, decades ago when we visited that magical place -- run up an invisible seam in the rock, the canyon-width away and then some, running up using those hardly seen hand- and toe-holds our guide had pointed out to us a few days ago in Mesa Verde.

Pasky walked along with us -- old at seventeen, tiring, no longer a rabbit-chaser, but still fond of Nature and company; and Lindsey and Patrick conversed; and I sort of zoned out as I seem to do so often these days, the distinctions of Time pretty much erased, living in this moment, and Mesa Verde last week, and Reno a week earlier, and the Canyon de Chelly twenty-five years ago, and the nameless creek that ran through the oak grove on our place when I was in the sixth grade, and similar sites and experiences from long before I existed, at least in the sense I know.

Resonance leads to Avatism, if I may coin a word, the feeling process of, while staying in one's own body and moment, simultaneously reaching back to bodies and moments of distant times. Not everyone is comfortable with this, or even perhaps aware of the possibility: I am. Maybe it's just part of my general evasiveness.

If the bosque encourages this sort of thing, perhaps that's why we Anglos clear it away. We're a practical people, eager to turn an immediate profit out of whatever we come up against. We'd rather reap than dream. This may be another distinction between the Northern, Anglo mentality and the Southern, especially the Hispanic -- which reaches, after all, not only back to Rome and the Mediterranean, but to North Africa and Arabia. 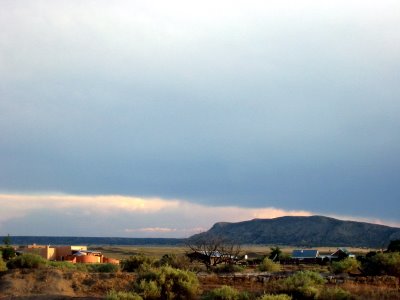 I suppose I was thinking of things like this, while following Pat and Lindsey, and looking up occasionally to make sure the kids were still on the edge of their precipice; and then they came running back, and our stream found a bridge, the one next to the Vulture Tree; and before long we had all climbed out of the ravine up to the mesa and looked southeast out across the plain to a low mountain in the middle distance, new peach-colored stucco houses on our left, older colonial-style shed-roofed ones on the right.

I wanted to build out here at first, Patrick said, but... And I could imagine that I would not want to build out here on the open land, partly in the knowledge that others would inevitably build nearby in my view, but more because of the feeling of exposure, of vulnerability. Georgia O'Keeffe is said to have loved this; the two or three years she spent, eighteen to twenty, living on the deserted Texas plain near Amarillo, and to have been permanently informed with this sense of openness and exposure: but it's not for me.

Next day we packed up and left. Sadly, at least in my case. These two friends are so easy, so semblable and simpatico (why does English lack these words?) that I always feel I'm leaving myself behind with them. And we trucked back into Santa Fe for another latte, another wi-fi, a little more shopping; and then it was down the highway to Albuquerque and a completely different stage of this year's Southwest Adventure.
Posted by Charles Shere at 9:15 AM