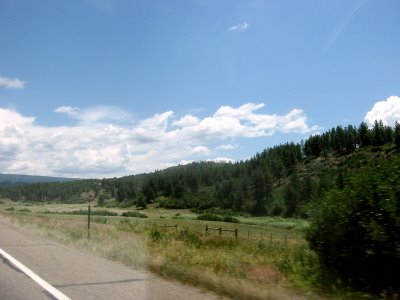 
DURANGO SEEMED LIKE a nice town. Moab is too Twentysomething Sportminded; Cortez is too sprawling (though it has a nice visitor center and decent espresso across the street in a nursery-garden shop-cafe). Durango, at least the old part of town, is compact, nicely balanced between tourism and history, can be walked, and has a good restaurant.

That would be Seasons Rotisserie and Grill, where we ate so well that we wondered who was doing the cooking. The waitress pointed out the chef, who was sitting at the bar, without a drink I hasten to add, tired at the end of his shift (for we'd pretty well closed the place). Lindsey and he talked for a minute or two, and then I asked Lindsey to give him her card. He took it, read it, and said Oh. Well, gee, I'm impressed; thanks for coming in.

No, I don't remember what I ate. I was exhausted: we'd driven a long way, and then taken that excursion to the "Cliff Palace" in Mesa Verde, where we'd climbed up to over 9,000 feet. At my age I take longer to get used to this altitude, which seems to affect the mind as well as the lungs and the legs. But I do remember, writing a week later, that the dinner was good, and it was nice to have a glass of Zinfandel again.

Next morning we were back in the car again for the final drive to Santa Fe, opting for highway 84 leading south from Pagosa Springs. No more red rock for the time being: we followed a valley due east from Durango to Pagosa Springs, through heavily forested country, only the narrow valley bottom farmed (mostly alfalfa, I think), past Chimney Rock to Pagosa. There I'd have like to stop at a museum dedicated to the creator of Red Ryder, a comic strip that meant a lot to me as a kid (You betchum, Red Ryder!), but the right foot has a mind of its own on a trip like this.

We stopped at the visitor center, I forget why. Pagosa (an Indian word meaning "healthful waters," we read somewhere) Springs (the colonizer's penchant for reduplicative naming at work) struck me as an unpleasant setting, ruined by unthinking vacation-home development, sprawling, pedestrian-unfriendly... Boy, do we need an active Slow Cities movement in this country! But we were soon out of it, due south, climbing to the New Mexico border.

AND THEN THAT ODD border effect. Even if the border's an artificial straight line, as it is all round New Mexico, the terrain seems to respect it immediately; terrain, sky, climate, mentality all change immediately. This part of New Mexico seems completely farmed -- or, at any rate, pastured. Even at this altitude, over 7,000 feet, and in this drought, going on for years it seems, the surroundings are bucolic. Not that we saw all that many animals, mind you: the pickings are pretty spare, and they must range pretty far. But there's a placidity here, a settledness; and there's no evidence for miles of any kind of tourist attraction.

Highway 84, when we were on it (I write July 2, 2006) had long stretches lacking pavement. I'm used to driving the fine graded roads of New Mexico; you can maintain a pretty good clip on them. But this was different: the surface wasn't graded and compacted and left at that; it was under preparation for eventual asphalt paving. We were driving on narrow lanes, rubber cones on one side, quite a drop on the other; hard crushed rock; dust; and not one but two immensely lumbering camper-vehicles ahead of us. I was finally able to pass one but soon caught up with the next. For miles it was constant shifting between low gear and second, and when I finally passed this fellow he obligingly swung over to his own left, forcing me nearly onto what shoulder there was -- the first bit of road discourtesy we'd seen since leaving the Bay Area.

Oh well. Pavement returned, and we were driving south toward the swing east to Abiquiu, country I've loved since first travelling here nearly twenty years ago on assignment for a Georgia O'Keeffe project. Ghost Ranch looked the same; even Abiquiu looked the same -- though when we stopped at Bodie's General Store it had changed terribly: what was once a nostalgic western general store, where I bought the big felt hat I wear in country like this, there is now a tacky beer-and-pretzels joint, the only headgear the omnipresent gimme cap, and no bandanas for the kids.

Then, a few minutes later, came the real surprise: A real freeway has been pushed from Santa Fe all the way past Espanola. With it (I don't mean to imply causality here) has come sprawl and the kind of residential development that seems to insist on uniform buildings, what Malvina Reynolds, bless her, referred to as "tickytacky." With some difficulty we managed to find that Kokoman Liquor is still there, just outside Pojoaque, and we stopped to pick up something to bring tonight's hosts.

Kokoman is a fine old institution, a ramshackle building whose interior reveals shelves and shelves of anything you'd want to pour down your throat, or just about anyone else's, for that matter. There was a Bandol Tempier, and over here a bottle of fine Spanish Anis, and when I took them up to the counter the clerk looked at my road-fatigued eyes and said Been driving long? And I said, from under my Bodie's hat, Yup. And he said, You need a drink.

And then past Pojoaque, itself all built up and freewayed and boasting its own casino -- my God, the number of casinos in this country -- and past the Santa Fe Opera House where the sound of this freeway must be annoying, and past a highway sign curiously offering the Santa Fe Relief Road which apparently has nothing to do with government handouts but is only a bypass toward Highway 25 south to Albuquerque; and then through Santa Fe herself on St. Francis Drive, and finally to Patrick's studio and a nice cold beer and his amazingly caressing paintings and his fine dog Pasky (nickname for Pascal), a little slow and creaky now at seventeen but still one of the sweetest animals I've met.

And then down to Galisteo, our home for the next four days, and a fine soup and salad with Deborah and Patrick, and conversation into the night. Conversation, of course, bleeds writing dry; and that's why this blog's a week out of date. But it is a fine thing, a restorative, a window on truth and consolation.

And it won't keep me from writing tomorrow, and continuing these notes...
Posted by Charles Shere at 10:55 AM

, This is a link you can see
wholesale fashion jewelry