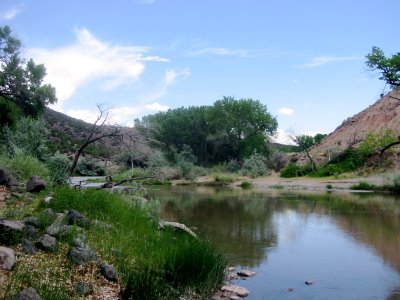 The Rio Grande at Embudo Station

TWO ROADS LEAD TO TAOS from Santa Fe: the slow high road through Tesuque and the highway along the Rio Grande. I prefer the high road, particularly in summer when there is no danger of snow and ice; but we took the fast road, stopping for lunch at Embudo Station, as Deborah suggested.

What a wonderful stopover! You'd almost think you were back in the 1970s or beyond. There is a gift shop, but it was closed, I don't know why. There were a number of people at the restaurant, but they seemed to be locals. The parking lot was cluttered with expensive new cars, for the most part: but they were scattered about any which way on the informal unpaved parking lot, tucked into the shade of big cottonwoods where possible, otherwise casually set about on hillside or flat, obligingly leaving room for others to maneuver.

Tables and chairs are set about on a patio outside the restaurant, but Deborah had said we could take our sandwich down to the riverbank, and that we did, sharing it with a couple of boys who'd apparently wanted similar distance from the hoi palloi. The river is low, of course, but it could have been lower. Upstream it arrives in a bend shaded by the tall omnipresent black-barked cottonwoods with their alarming green leaves; flecks of "cotton" were just beginning to fall -- early, it seems to me; perhaps due to the drought that's killing off so many piñon pines here.

Closer to there are fewer trees, and down here by the water the open sky was welcome, not too hot or oppressive. The food was good enough for me to congratulate the cooks when leaving. We bussed our empty plates back to the cashier, inside the restaurant -- which looked like it would be welcoming on a cold or rainy day, in its simple, old-time comfort, and resumed our trip.

Not too much has changed on the Taos Highway. It's still fast but narrow, with an overlook here and there if you want to relax with the wide beauty of the mesa, once you've climbed out of the valley. The river still lies in its implausible gorge off to the west, an amazing slot etched deep into the mesa, utterly unphotographable in its remoteness. Even the little community of Ranchos de Taos seems about as it did ten or twenty years ago.

The church there has been fixed up. It must have been a slow day: there was only one person taking photographs, and he was in the little gardened courtyard at the front of the church, which turns its famous back on the road. We went in, to find a typically pretty country mission church, nicely stabilized and fixed up. Across the street there was the expected gift shop -- postcards, calendars, plaster saints, CDs of liturgical music, but also rather charming little amateur paintings of saints and landscapes; and a friendly woman tending it all and not too disappointed when we only bought a couple of notecards from the sale bin.

Next to the gift shop, a large wooden trough, one end propped up off the ground, on which lay a couple of shallow wooden boxes lacking tops or bottoms, all this apparatus caked with mud the color of all the walls and buildings hereabouts: in fact, equipment for the production of adobe bricks. Mix the mud with straw, pour it into the box-like frame, let it dry, pull the frame off, carry the new brick away to be stacked on the others.

Behind all this was an old adobe wall not six feet tall, near its top the ends of wooden poles showing a shed or something lies beyond it. It's made of brick, the outside plastered with the same mud; and at the top it seems to be protected by a layer of adobe mud to which a small amount of cement has been added. Behind this shed, attached to it, a two-storey building begins to suggest the grouped built-on architecture familiar from the cliff dwellings at Mesa Verde, and to be revealed in a couple of hours at the Taos Pueblo.

It's not the only really old wall hereabouts. Ranchos de Taos seems to be a small community scattered about its church. The roofs are low, the doors and windows small, often framed in milled wood painted a turquoise blue -- said to bring good fortune, said one of our guides somewhere; said to repel flies, say other guides in Provence.

I'm often reminded of Provence here in the southwest, of old Provence, really old Provence -- the stone and informal brick, the low roofs, the dry landscape. Of course the high desert climate is not at all Mediterranean: but the piñon forest aroma and the loose sand-and-gravel footing recalls the French maquis. And the history of human occupancy is similar, when you take the long view -- successive waves of people coming in, from Greece or Mesa Verde, Old Mexico or Rome, Swiitzerland or New York, hunting and foraging, settling, farming, "developing," finally touring. 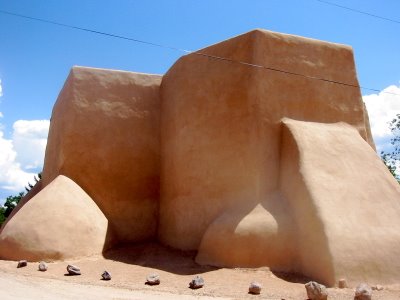 The church at Rancos de Taos

TOURISM HAS REACHED the final stage of a three-stage progression I first thought of when I was an art critic, a lifetime ago. The progression begins in worship, continues as art, ends as entertainment. Art seemed to me inevitably to follow that downward curve, from the religious significance of painting and sculpture at the dawn of civilizations, through the high art of the Renaissance, to the successive waves of art styles in the Twentieth Century.

So did dining, much more quickly. Everything happens more quickly: cultures accelerate themselves to death, as Matt Matsuda points out in his epochal book The Memory of the Modern. Food was (though unconsciously) a matter of worship, of the most significant kind of worship: that of ordinary daily life. It was elevated to art in the 1970s, and became Show Biz not long afterward. (I'm not entirely kidding.)

Same thing with tourism. It began with migration, I suppose, which was or must have been a matter of economic necessity, but it was also a matter of religious pilgrimage. I suppose you might argue that the wealthy always practiced it as entertainment, but I'd demur a bit; for many of them it was a matter of spiritual or at least aesthetic practice. So it was for us, when we began serious traveling in the mid-1970s, and so it remains: but there's no doubt an extensive industry has grown up around Travel, an industry that depends on the leisure- or entertainment-quotient it represents for the majority of tourists.

The church at Ranchos de Taos has been an icon for decades, photographed by the likes of Ansel Adams, painted by the likes of Georgia O'Keeffe. The first thing I did, last week, on parking the car behind the church, was to take a photo; and after walking round to the front of the church, and looking inside, and visiting the gift shop, the last thing I did before getting in the car to drive away was to take another photo, from what seemed to me an unusual perspective.

Then we drove on to the Pueblo. Lindsey and I had been there years ago and remembered it as intriguing and rewarding but also ragged and dirty -- dogs, garbage, rags, unkempt doorways and the like. All this has changed. Like every reservation Taos Pueblo has its casino, and these casinos, say what you like about their exploitation by non-Indians, about their contribution to the moral laxity of our country, these casinos seem to be bring a measure of prosperity to the tribes who lend their names to them.

Taos Pueblo is clean, orderly, and, in its way, developed. We went on a tour, guided by a handsome young man recently voted by his peers the Tourguide of the Year, and a little embarrassed but proud of the honor. He couldn't take us on the complete tour, as a hailstorm broke out en route, and our group, say fifteen or eighteen tourists, took cover under someone's garage-shed roof to pepper him with questions, all answered easily and good-humoredly.

I hadn't taken the camera along -- not to save the five dollars's fee, but because I always feel uneasy taking photographs in such places. There must be plenty of photos online, if you're interested. The buildings and the setting haven't changed since our previous visit, so many years ago: a three-storey adobe complex to the north; a two-storey one to the south; between them, the narrow Taos River, with two or three foot-bridges to ease the visitor's walk from one curiosity shop to the next.

We talked for a while to a potter, attracted by a truly excellent large delicate bowl out in front of his shop. We stepped into jewelry shops, and talked to an old woman who'd run out of fry bread but welcomed us nonetheless to her small display of postcards. Everyone was polite, well-dressed, direct. I don't remember seeing any dogs at all: I can't imagine where they've gone.

Another thing: the Pueblo was clearly less densely populated than before. Our guide told us that few families remain on site; most have moved to more up-to-date quarters, in newer houses, still on the reservation, only a few hundred yards away. There they have electricity, high-speed internet access, garages for their cars. Perhaps that's where the dogs have gone, too. Perhaps this is a modern analog of the more final move away from the pueblo at Mesa Verde.

What touring always reminds me of is the transience of human activity. Homo sapiens seems destined to be a migratory animal, though his migrations are slower, their cycles more infrequent, than those of songbirds, whales, and the caribou. Like them we are driven by economic necessity. Unlike them, as far as I can tell, we tend to elevate that necessity to religion; to make art of it; and then to continue as an antidote to boredom.
Posted by Charles Shere at 8:51 PM