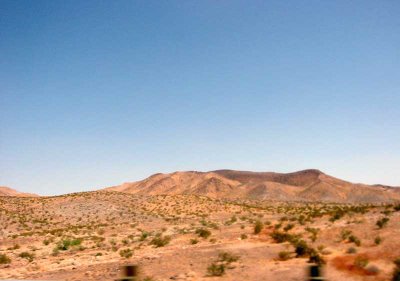 THE GLORIOUS FOURTH dawned with the scent of distant rain; we took our breakfast in the hotel dining room; we packed and said goodbye to the few remaining relations; and we hit the road for Needles. It’s 1150 miles between Albuquerque and Healdsburg, long boring miles for the most part, and Needles is short of the half-way point.


Barstow, however, is long of it, and the closest town to the central point, Ludlow, is not a town I want to sleep in. Ludlow has unpleasant memories: it’s the town you’re stuck in when you blow a radiator hose or a tire while crossing the Mohave Desert, and whatever part you need is not in stock at any local shop, so you bunk down in a grungy motel while waiting for it to come from God only knows where.


Or such was the case years ago. Now I suppose things are different; there’s a plethora of parts on hand, or they’re quickly supplied off the Internet; there’s a Starbucks in town, and a Best Western, and a Days Inn; there’s probably even an Italian restaurant. But all that’s conjecture. I haven’t stopped in Ludlow in years, and I wasn’t about to on this trip. We planned to spend the night in Needles, and to dine in Kingman, where we’d found a decent little restaurant a few years back.


So we bravely hit the road, highway 40 as it’s now enumerated, nodding at the Continental Divide, at Thoreau, at Gallup where we’ve spent some interesting hours over the years, and stopping at the Arizona Welcome Center to find it closed in honor of the holiday. We stretched our legs in a nearby curio shop instead, kitschily housed in an enormous concrete wigwam, and then drove on again, intent on a stop in Flagstaff.


Here, a little north of town, is the fascinating Museum of Northern Arizona, one of those museums that refuse to honor conventional bounds between history, natural history, and art while dedicating themselves to the examination — celebration, even — of their own specific regions. We found a couple of much more modest ones a week or two earlier, in Monticello, Utah, and Eureka, Nevada. There’s a fine one in Bend, Oregon. I wish we had one here: such museums help remind the people of the ongoing history of their place, a history that should be respected if the spirit of the place is not to be violated for short-term profit or distraction.


We were not there for enlightenment, however, but for commerce: we hit the gift shop for souvenirs — themselves not a bad idea, for their purpose is to contain, in a small object, that same spirit of place. I listened to a long conversation between the woman behind the counter, who’d only been on the job a couple of weeks but who obviously knew the stones and sheep of the area, and a touring couple up from Phoenix: they were marveling at the price of a couple of small landscape paintings, as they’d bought one by the same artist years earlier at much less cost.


They weren’t self-congratulatory about this, but genuinely pleased that the artist was gaining recognition. I was pleased, though I kept it to myself, that decent paintings, jewelry, pots, and weaving was finding its market. If the stuff in the concrete wigwam was cheap and fraudulent (as much of it had been), here you found authenticity.


Where to eat lunch, I asked the woman, and she was quick to suggest Late for the Train, a sandwich joint a mile or two back toward the highway. Stepping through the front door we found a dozen or so people scattered among the five or six tables, all lifting their faces heavenward in the same direction: they were watching television — the first we’d seen in days — and it was halfway through the first overtime period of the semifinal between Germany and Italy. We’d forgotten the World Cup!


So we lunched on very good tuna-salad sandwiches and watched the Italians steam toward their inevitable surprise victory in the last minutes of the game. Victory was further sweetened by our company: at the next table a family of German tourists looked glumly at their defeat, curiously at our elation. Weleft in a fine mood.


Then, an hour later, the storm hit: we were driving through a desert monsoon, through rain so heavy I was tempted to pull off the road and wait it out. We found intersections flooded in old Kingman, down by the railroad station, and our restaurant closed, of course, and had to settle for a mediocre steak at the Dam Restaurant, which offered little to explain its evident popularity; and then drove on to Needles for the night. 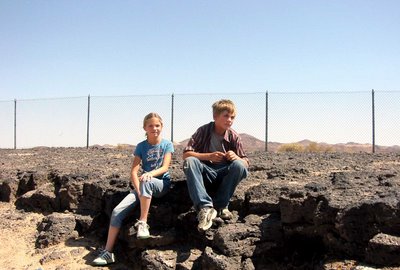 NEXT MORNING DAWNED CLEAR and threatening to be hot, of course; and I recalled my first sight of Needles, that trip in 1944, when it was over 110 in the shade, Mom complained, and again we camped down by the river. Needles has changed, though not as much as Albuquerque; changed enough to provide a decent breakfast to offset the lack of an espresso.


We took turns driving across the desert, stopping to investigate the lava flow and splash cold water in our faces; wondering once again at the giant used-airplane lot near Mojave; entertaining ourselves counting cars in the many railroad trains, all looking incomplete these days without their cabooses, like the lizards Emma’s cat has robbed of their tails.


They’ve finally built a proper road from Barstow to Mojave; that scary two-lane stretch is mostly a thing of the past. Little else has changed all the way over the Tehachapis; that curious little cemetery with its cypresses is still neatly tucked into a hillside north of the highway at Tehachapi; the fine oak woodland, high over the abrupt drop to the great Central Valley, still speaks of Old California.


But then does come that drop. I prefer to go through Arvin, where there used to be a nice little plain-Jane taqueria; but we went through Bakersfield, stopping downtown there to try to catch the end of the German-Portuguese game but finding only a pretty decent sandwich and some necessary ice cream at the Searchlight, apparently a theater-company-cum-cafe around the corner from the old Post Office.


And then the dull straight road up the west side of the valley, smoggy fields and feedlots to the right, those beautiful low anthropomorphic hills to the left; and grassfires; and rest stops; and big-rigs; and the final descent to the Bay Area; and then we were home again, our beautiful home — why do we ever leave?


But leave we do, and will again in a week, for Ashland this time. See you there!