Summer, 1944. We had been driving from Flagstaff or thereabouts, at the speed limit -- 35 mph -- and it was hot and dusty. Below us lay the surprising green valley of the Rio Grande, an oasis in the desert, the first green, the first water, the first trees we'd seen in hours. The city, what there was of it in those days, lay beyond the river. We parked under a tree on a riverbank and prepared our sleeping bags for the night. Mom took me to the zoo, I remember. Next day we drove on east...

IN ABOUT FIFTEEN MINUTES, I told Lindsey, we'll drive over a low rise, and you'll look down on one of the nicest sights on Highway 66.

This was a while back, that I said this. It was after 1965, because we were driving the old Mercedes; it was before 1980, because we went on to visit my grandmother in Oklahoma, who died November 1, 1979. I was remembering an earlier trip to Oklahoma, when Dad drove the Ford over the rise and there before us was the town of Albuquerque,

I've only lately begun to wonder what that drive meant to Dad. It must have been his first trip back across those states in more than ten years. He'd arrived in California sometime in the early 1930s, crashing with his aunts Gladys and Myrtle in their little cottage in Pacific Grove, which John Steinbeck was then writing about in his novel Tortilla Flat.

Dad was born in northeast Oklahoma, where his father worked in the nearby lead mines. The family legend has been that they later settled for a time in Bisbee, on the Arizona-Mexico border, where Granddad worked in the copper mine for a time, then abandoned the family; and that Dad had to quit school in order to support his mother and let his kid brother school.

I don't know how much of that is true, nor how I could find out, at this point. I have some dates:

All those events took place, I'm told, in Craig County, Oklahoma, so I conjecture the move to Bisbee followed Elsie's death. The Great Depression arrived not long after, and things in the Shere family began to go downhill fast. 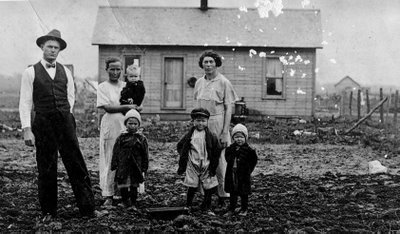 That's Granddad on the left, clearly a hard man. Grandma is at the right. Dad wears the mattress-ticking overalls and the cap; his brother Alvie is on his left; Elsie's not yet born. I don't know who the other woman is; perhaps a visiting sister of Grandma's -- her husband would have taken the photo, I suppose. Now that I study the photo, it occurs to me she's one of my great-aunts, Gladys or Myrtle; I think I recall seeing that face, much older, when I was about the age Alvie is in this photo.

WE DROVE OVER THE RISE, Lindsey and I, back in the 1970s sometime, and my God, there was Los Angeles in front of us. Albuquerque was no longer a small oasis where you camped by the river. I thought about all this as I read, in tHarvey Fergusson's introduction to the reissue of his Rio Grande,

When I finished this book in 1930 Albuquerque was a town of about 34,000 people. Neither I nor anyone else thought it would ever be much larger. So much for human prevision. The population of Albuquerque is still a matter of estimate, but one citizen who is in a position to make a good guess says that is has not less than 275,000 -- and is still growing.

Fergusson wrote that forty years ago, and Albuquerque's growth has fortunately slowed; the population now stands at a little under half a million. But it is beginning to be surrounded by huge suburbs, and the sprawl is striking -- particularly as you drive south from Santa Fe, through country that's still sparse and secretive, only the new casinos reminding you of the Indian communities hidden in valleys and canyons off to the west.

The difference between Santa Fe and environs, to the north, and the Albuquerque agglomeration is more than physical. There seems to be a different mentality as well. Santa Fe is like San Francisco, Albuquerque like Los Angeles. Or, better, Santa Fe is Sacramento; Albuquerque is Bakersfield. Albuquerque is a university town; the University of New Mexico is there, but that doesn't seem to impact the touristy Old Town, or the western suburbs.

Old Town is something like Los Angeles's Olvera Street, with a good bit of San Francisco's Pier 39 rubbing up against it. Curio shops, indifferent "Mexican" restaurants, and the Rattlesnake Museum get a lot of the tourist action; the pretty, small plaza and the prettier San Felipe de Nero church provide welcome tranquillity. And behind San Felipe, the Church Street Café provides a pretty decent lunch, if you're not too demanding about competent table service.

But we weren't in Albuquerque for museums or curios, or even bookshops or espresso bars. We were there for a family reunion. Lindsey's mother was one of six children (five girls, one boy), all of them now gone; and this was a rare gathering of the clan, of Lindsey's cousins, and their children and grandchildren.

Many of them were new to me. The family springs from Wisconsin, and many still live there, though a few of the younger generation have settled in Colorado and Texas. They aren't northern Californians, that's for sure; but they aren't red-state types either: they're what my dad used to call the salt of the earth, good hard-working people, tolerant, with definite political opinions that agree pretty much with my own.

We stayed three nights in an inn, as it's called, on the edge of a public golf course, the four of us in a smallish room on the second storey, off an outdoors gallery overlooking the 18th hole. Lindsey's sister Susan lives in a house not a hundred yards away, also adjacent to the course. It was a long weekend of sun, greens, beer, dogs, kids, and cousins, all bound by blood and leisure, and a long way from the hardscrabble of our grandparents -- who nevertheless were there at the backs of our minds, sources and shapers, not entirely approving of what their descendants have made of the world they knew. 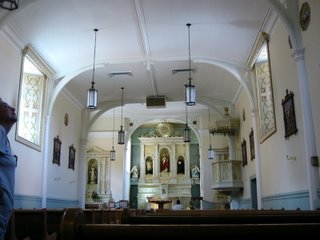 Hi, i was looking over your blog and didn't
quite find what I was looking for. I'm looking for
different ways to earn money... I did find this though...
a place where you can make some nice extra cash secret shopping.
I made over $900 last month having fun!
make extra money