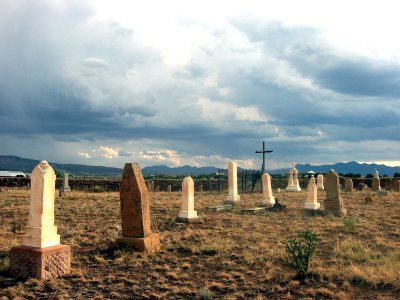 GALISTEO IS AN OLD TOWN twelve or fifteen miles southeast of Santa Fe -- a very old town, now hardly more than a collection of houses, a general store that never seemed to be open, a "new" church, an "old" cemetery, a "new" cemetery. All those things in quotes are just to remind us that all such qualifiers are tentative.

At one side of the church is an imposing row of old mailboxes, one I suppose for every residence in town. Yes, Pat said, there's a lot of grousing about that, those are our old mailboxes, and here (pointing to an installation around the corner from them, behind the church) are the ones they make us use now. I should have photographed the contrast, for it says a good deal about what's going on around here, what's going on in the whole damn country.

The old mailboxes are mostly the familiar rounded-top drop-door red-flagged rural box, most of them white or metallic, some painted in varying degrees of fancy, most at about the same convenient height, car-window level. The new ones look like -- well, let's see: they look like a bank of slots in an apartment house, big metal boxes with uniform slots and spaces, color an official phony bronze. Uniform, featureless, industrial, chic, easily cleaned, anonymous.

Behind the church is the cemetery pictured above. Its gate is locked. The old walls are being repaired -- piled fieldstone capped with a slush of casual concrete, the pink-beige you see everywhere. The gravestones are sparse, many awry, some rather formal, many of them quite simple and badly weathered. A paper pasted up somewhere says the graveyard has been declared full, which is why it is locked, to be visited only by special arrangement. A little ways off, across the road that leads west toward Cerrillos, there's another, surrounded by a simple fence. I don't know if anyone wants burial here any more.

There seem to be a number of important people living in Galisteo; we recognize a number of names in the phone book. They live in plain, low, plastered, flat-roofed houses, behind adobe walls enclosing their gardens, often joining in associations for the various necessary utilities. Our friends, for example, occupy a house built twenty years ago or more, though they've remodeled it extensively. The front door leads into an unfurnished room under the typical "viga" ceiling: cottonwood or pine logs serving as rafters, lighter poles crossing in the other direction, waterproofing of some sort above that. Two walls are open, merely screened, though perhaps windows can be put in in cooler weather; I don't know.

A screened front door leads into the long, cool living room, Pat's paintings on the wall, a low bookcase filled with interesting books along one wall, windows on the other looking into the garden. Next, the kitchen, well fitted out since Deb's a professional cook; then their bedroom; then a big bathroom. All those rooms in a line, with windows looking south into the garden-courtyard, other walls covered with paintings, or shelves. The floor is marvelous: adobe, straw, polish.

I suppose most of the houses hereabouts are similar. We visited one other, also the home of an artist, a woman who'd given up her hippie life, moved out of her camper, sold the Santa Fe home she'd been fortunate enough to have, and set up shop here in Galisteo. Hers is an old house, with old oak floors and a wide porch running the length of the house-front. But behind it she's built a fine studio for painting and, especially, ceramics; and out beyond a fine garden she reclaimed an adobe ruin, adding on to it, to contrive an excellent horse-barn.

We were there to visit an exceptionally pretty foal, two months old, born to a seven-year-old Arabian mare with an unusual freckle-red-and-grey coat; but you couldn't help admiring the woman herself, or for that matter her daughter, a beauty in the lean, capable, sleek Western style. 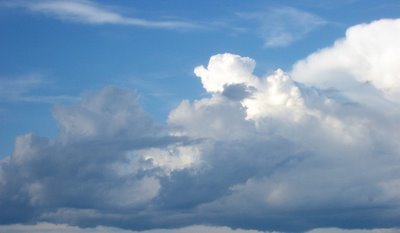 LET'S TAKE ANOTHER LOOK at that Galisteo sky! The clouds have been remarkable, as is usually the case. Our arrival seems to have brought luck, Pat says; it's rained a little for the first time in months. We drive west underneath those skies on the graded road leading over a rise ten miles or so toward Cerrillos. At the high point on the road we stop to pick up a few small rocks. I notice a rusty shackle-bolt nearly buried in the road, and sure enough not far away is a piece of leaf spring, and then another, a little longer -- someone must have broken an axle hereabouts, or perhaps just lost a little of an old junked car on his way to the nearby landfill.; then turn south toward Madrid, a town I recall as having fine funky antique and junk shops.

Pathways wander through all this detritus, bordered by glass, or chains, or bricks, or stones. A narrow river of broken glass invites us to smash another bottle or two into it. The proprietor emerges from an aging house-trailer to welcome us -- a woman in her fifties, I'd say, weathered and good-humored and content to spend her time making a little bit of casual beauty in the desert.

Outside of Madrid we stop behind a line of cars and trucks. What's holding us up? I get out and walk back to the driver of the flatbed truck behind me, a young man who seems content to have his day interrupted, even though he has a full load of hay on the truck. They're filming a movie, he tells me; Madrid is a madhouse. Sure enough, when we get under way again, we soon come to a rise overlooking the town, and on our right there's a small city of trailers, trucks, and support vehicles.

And what's this coming our way? A truck, and behind it a handsome young man smiling on his fancy motorcycle. But then we notice his motorcycle has no front wheel: it's fastened by a long drawbar to the truck which is towing it along, and which carries a number of big cameras pointed at him.

Madrid's one main street is littered with scores of Harley-Davidson motorcycles, and tough-looking bikers stand about -- but their postures are wrong; something about the way they look at one another, converse, fall into little social units, says they can't be real bikers at all. They're actors: Disney's filming a movie about middle-aged men who drop out of their professions, buy motorcycles, and go to the desert to find enlightenment or at least bonding; and stumble on a motorcycle-infested Madrid, and rescue it from the bikers, probably by recognizing their innate goodness.

We find a few gifts and wander into the bar for a beer, shaking our heads at the false false fronts Disney's built here, and the white scrim that covers the main street to mute the strong New Mexico sun; and then turn back north again to explore Santa Fe...
Posted by Charles Shere at 9:53 PM

Hi just wanted to slightly correct you in saying this place is called Tinker Town , and interesting enough the woman who greeted you may actually have been the creators wife, gathering this info from pictures.

Thanks. Tinker Town, a much better name. Amazing to find readers a year later! What "pictures"?