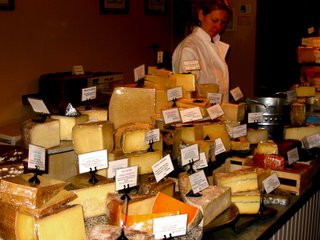 That’s a masterstroke of imagination, to think that combination needs yet another ingredient to render it perfect. Of course it does not: but then we can’t know. How could Tony have done this to us? How I wish I could introduce him to my vermouth, fennel, and pork!
Posted by Charles Shere at 10:54 AM No comments:

A QUICK NOTE ON BITTER HARVEST, which we heard performed by the Berkeley Symphony Saturday night. This is a new dramatic oratorio: a poetic libretto by Amanda Moody, set for soprano, tenor, baritone, chorus and orchestra by Kurt Rohde.

The subject is the tragedy of a midwestern American farmer, a Vietnam veteran, recently a widower, still mourning the further death of his only son, and now losing his farm to an unspecified Corporation that sounds a lot like Monsanto, the gene-modified seed-patenter that recently sued the Canadian farmer Percy Schmeiser for harboring patented plants he hadn't paid for. (They sprang from seed apparently drifting in on the wind, or spilled by passing vehicles.)

Bitter Harvest has so many qualities that a list of them inevitably sounds contradictory. It is intelligent, passionate, lyrical, poetic, serene, biting, ironic; above all it is beautiful. It is not fresh: the music often shows its own roots in both the 1960s avant-garde and the more recent new consonance. But the consonances, themselves often recalling Alban Berg's velvety sudden major triads, emerge as acoustical facts rather than a musical grammar forcing the melodic and harmonic issues.

The production was visually arresting as well as acoustically: the fifteen-voice chorus, changing from farm flannel shirts to corporate white shirts and neckties, sat stage center, the three vocal soloists in front (farmer John Duykers on the left, corporate villain Troy Cook and social worker Henrietta Davis on the right). On either side of the stage stood a percussion section, and the large chamber orchestra was in the pit. Everything sounded amplified, and this threw the sound off to my ears at first: but ears are amazingly adaptive, and after a few minutes all fell into place.

The soloists were at the top of their form, and Kent Nagano managed the detailed complexity of the score skilfully, easing its precision into a lyrically dramatic long line.

At a little over an hour long, and divided clearly into 17 chapter-like sections, Rohde's score moved easily. Moody's libretto doesn't proceed chronologically, but loops and doubles, repeating not words, as in a Handel oratorio, but entire phrases and references, often after extensive developments taking the story into a parallel context -- the farmer's family life, Vienam, legal confrontations, and that narrative that strikes dread into anyone familiar with it: the tragic farm auction, where an entire working life is dismissed as so much worn-out machinery.

Bitter Harvest won't easily find a place in any standard repertory: the music is dense and often angular; the plot is poetic rather than straightforward; the subject is less than gripping, alas, to most Americans these days. (Even here in Sonoma county a moratorium on genetically-modified crops failed miserably at the polls last month.)

But Bitter Harvest is powerful, important, and best of all beautiful. The performance was splendid, completely persuasive. I'm glad I heard it, even at the end of a long day's drive from Ashland to Berkeley. And I'd like to hear it again.
Posted by Charles Shere at 3:17 PM No comments: