Eastside Road, March 30, 2017—
VERY QUICKLY because there's much to do before the weekend, an account of some recent museum exhibitions seen:

THIS IS A FINE tribute to a Bay Area painter, printmaker and sculptor who had a considerable influence on generations of artists, partly for his work on the faculty at Stanford University, partly for the many gallery exhibitions he had during his long career. With a few exceptions his work was remarkably consistent, centered on the human form, growing both more evanescent and more lyrical as Oliveira himself aged. The prints on view are mostly early ones, from the 1940s into the 1960s; the bronzes are later, in some cases much later.

It's easy to see the influences on the early prints: above all Northern European expressionism: it's also to see the community his work has with contemporaries like Manuel Neri and the early Joan Brown. Most remarkable, I think, is the tranquil, egoless quality of the work. Sculptures which might suggest vulnerability, even victimhood, seem to me rather to be transcendent, liberated. The installation is thoughtful and spacious: I'm sorry to be recommending the show so late in its run.

AN INTRIGUING IDEA on paper, with less focus in the installation, pairs two artists of unequal vision (I think) to explore how they responded, in their work, to the work of their antiquity — Picasso to Greco-Roman classicism and Iberian primitivism; Rivera to the art of pre-Columbian Mexico. One of the most intriguing aspects of the show is the display of ancient objects from Picasso's and Diego Rivera's own collections.

The curatorial parallels wrestle with inequality — Picasso's Minotauromachia eclipses, I think, Rivera's cartoonish (yet powerful) adaptations of the Popul Veh. (One wants hours to inspect these two works, generously exhibited here.) And the interesting short film about Picasso's Guernica and Rivera's mural for the San Francisco City College auditorium (I think) reinforces the point: even when addressing an immediately contemporary event, the bombing of Guernica, Picasso's work seems to have an eternal significance, is not compromised by the representation of passing fashions in clothing and hair styling.

But the work is absorbing, all of it, and the installation is particularly spacious and handsome. What a pleasure to be able to move among these marvelous pieces at leisure, to contemplate their conversation at length!

I, too, was unfamiliar with half these artists — and to tell the truth some of them, I think, at least as represented in this show, did not produce work of lasting interest. The familiar names, though, responded to the uncertainties of their time with power and energy, proving that the making of art need not be a gendered business.

The show includes well-written wall placards and useful videos in which the painters themselves speak to the issue of gender. One fascinating point: those active in the Bay Area — de Feo and Remington among them — state they had always felt completely accepted by the men of their community; the New Yorkers spoke of quite a different state of affairs.

This is a really important exhibition and it's a pity it doesn't travel further. It should certainly have been picked up by institutions in New York and the Bay Area; their failure to join the sponsorship is inexplicable. But Palm Springs has other attractions this time of year and isn't really that far from Los Angeles.

Posted by Charles Shere at 6:46 PM No comments:

Contentment in the face of decline 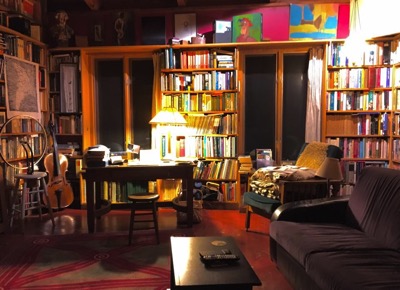 SO MANY RECENT experiences converging; time to awaken this Eastside View. The view outside is green green green as the unusual rains continue. It’s the time of year, early Spring, when I always recall Robert Nathan’s marvelous novel One More Spring , read alongside a dozen other books in a course I took on the 20th-century novel from one of my most influential teachers, Sidney Meller, at Santa Rosa Junior College, sixty years ago. It’s time to re-read it, I think; as I recall, it’s an optimistic view of life going on in spite of the Great Depression, aging, poor health, and poverty.

And this is where I read. I posted the photo to Facebook the other day, and drew an interesting comment from a Facebook friend living in Europe:

I must admit, Charles... I envy the construction of your later years; I sadly doubt I'll do anywhere near that well...

“the construction of your later years ": a felicitous phrase, Paul, giving me a thing to contemplate. Much of it has been luck and serendipity, of course, and nearly all owed to my wife's serenity and frugality. But to an extent it's been a deliberate choice over career, and intended as a lesson to the grandchildren …

Of course one aspect of luck/serendipity is also knowing when to go with change and opportunity - I'm afraid I tended to be a bit pigheaded and uncertain, refusing to make decisions when unsure; some of those non-decisions avoided problems, others left me a bit in limbo. Of course I know there are still probably some years to move towards where I'd want to be...

(and I congratulate myself that one grandchild was quick with her response: “and a wonderful lesson it is.”)

I and Pangur Ban my cat
’Tis a like task we are at,
Hunting mice is his delight,
Hunting words I sit all night.


’Tis a merry thing to see,
At our tasks how glad are we
When at home we sit and find,
Entertainment to our mind.

So in each our task we ply:
Pangur Ban my cat, and I
In our arts we find our bliss,
I have mine and he has his.

Four quatrains where the original has, I read on Wikipedia, has eight. We are told further that it is "an Old Irish poem, written about the 9th century at or around Reichenau Abbey. It was written by an Irish monk, and is about his cat. Pangur Bán, "White Pangur", is the cat's name, Pangur meaning a fuller."

I read the verses in Everyday Life in Medieval Times, by Marjorie Rowling. I like those Everyday Life titles; they're old-fashioned and probably pretty out of favor by now, but I like them. Just as, hokey as it is, I like the translation, which is no better than most of us would have done ourselves. (Thomas Fowler, a 19th-20th c. Irish cleric.) Doggerel, almost, saving the subject. And I particularly like that it was written in Irish, presumably by an Irish monk, in the ninth century, on an island in Lake Constance, where itinerant monks were keeping culture alive in a dark time. These are the things I contemplate, or among them.

A WEEK AGO we saw a performance of King Lear , put on by A Noise Within in Pasadena. It was one of the best Lears I've seen, beautifully balanced/ This Lear was not simply mad; he was apparently in the early stages of dementia, confused as to why he was behaving the way he was, trying to make sense of things. Among other things, language: trying to understand what he, and his daughters, meant by their various statements. Trying to bring heard statements (his own included) into conformation with remembered experience in its logical consistency, which is all we have to go on.

Lear, of course, growing old, decided to divide his realm into three equivalent parts and leave each to one of his three daughters, as our president has decided to put his business into trust and leave its management to his daughters and their husbands. In the Pasadena production the two older daughters were not evil from the beginning, but became corrupted by the sudden responsibilities they were faced with and maddened by the illogical and unpredictable turns their father takes as his own madness develops further. It's a vicious loop spiraling into a hellish descent in spite of Gloucester and Kent, who seem to understand the problem but are politically and socially unable to interfere with its process. You can see how this relates to our present political situation.

My brother wonders if this situation is material for an opera. No, I think; too big and sprawling even for a Ring-like cycle. But the choosing of the Cabinet might make a comedy. And a play about the descent of this presidency into chaotic incompetence, and its ultimate resolution into a caretaker administration, has a Shakespearian promise. It should be written quickly, before it actually takes place, so it will be seen as fiction certainly, and not alternative fact.

I've been silent here for months, benumbed like so many by the bizarre quality taken by the times we live in. I've been meditating on the differences between Knowledge, Awareness, Understanding, Belief, and Faith. Things are so much simpler for Pangur Bán. Were they really that simple for me, too, and for the rest of us? Possibly not. Certainly not now; not in the foreseeable future. I feel, at times, like Lear, and desire my quiet room. I hope to be as silent as that cello, as purposeless as that bicycle wheel.

The central problem of musical composition is the relation of the moment to the ongoing process. Of course not all composers know this. Many simply accept the norms of musical composition they are given and continue them. But I came to maturity as a composer (if ever) in the 1960s, when Time and Process and a skeptical address to Tradition were as natural as mother's milk. I had planned to spend the first four months of this year writing about those years, as some of you know, continuing my memoir Getting There into the next twenty-five years of my life: but I have been struck by the extent to which the qualities of those thirty years, 1964-1987 to be exact, seem to have been forgotten, or at least quite misunderstood, by those who've reached their maturity since.

I had thought the present morass was simply the result of failure of nerve and of the triumph of short-term greed over long-term enjoyment. But the sudden recent turn of political events has revealed, at least to me, a much bigger and more fundamental evolution. Everything goes along slowly; then everything hits a bump and crashes about. I think we've just hit such a bump, and the 1960s and '70s are as dead as the Bronze Age, as Cycladic sculpture, as Latin, as the liberal arts.

In the meantime Spring has returned, one more spring. The flowers have returned, as they always do. Today I walked with a daughter and a friend seven miles among the redwoods, climbing steeply at times, noting at various times iris, trillium, poppy, blue dick. The recent storms have smashed a number of trees, snapping them in half or blowing them completely out of their root zone — always an impressive thing to see. Other young trees will replace them. With luck, something like the Irish monks will maintain the liberal arts, and write delightful but oddly regretful poems in the margins in spare moments.

Posted by Charles Shere at 9:31 AM No comments: