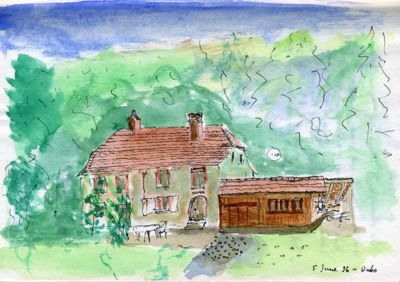 You can look at the score by buying a copy; it's published at Lulu.com. You can hear it here.(The second movement, which is only five minutes long, can be heard here.)
Posted by Charles Shere at 5:52 PM 4 comments:

Eastside Road, Healdsburg, March 8, 2009
I DON'T RECALL when I first met Ubu Roi: probably sometime in the late 1950s, most likely through the Evergreen Review issue dedicated to 'Pataphysics. I've seen Alfred Jarry's play staged four or five times since, most recently and, I think, most successfully last night, in a raw, energetic, resourceful production by The Imaginists. Three performances remain in the schedule, and if you're within range you shouldn't miss it.
Ubu Roi is probably the oldest Absurdist play to hold the stage—though now that I type that I realize there's nothing Absurdist about it; it's simply a totally realistic, moralistic, objective updating of just about any Shakespeare historical play. Ubu, fat, stupid, and utterly without morals, overthrows the Polish king, converts the national phynancial system into pure personal gain, taxes the peasants to death, and ultimately takes on the Whole Russian Army. At one point he announces his agenda in the tersest of terms:

You can see that, like Shakespeare, Ubu Roi has the misfortune always to be relevant.
The Imaginists have cross-cast the play: King Ubu is played by a woman, Amy Pinto; Mère Ubu by a man, Eliot Fintushel; and Captain Bordure by Brent Lindsay in an androgynous costume. (The small cast plays a great number of roles, ranging from a bear to The Whole Polish Army.)
The costumes are wonderfully inventive; props ditto; and the scenic flats are so beautifully conceived and executed I'd buy them to hang on my walls if I had a mansion or a winery.
Ubu Roi is scatological — the riot at its 1896 premiere was prompted by the very first word in its text, Merdre, translated in this production quite literally and without the extra "R". Still, I think any kid from ten up will love it, and any adult with a sense for politics, history, or the absurd (or is that redundant?) will too. I'm glad I went; I wouldn't mind going back.
Posted by Charles Shere at 11:14 AM No comments: