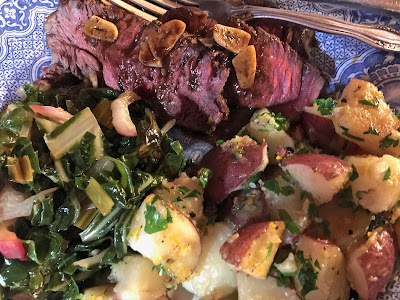 ST. VALENTINE has come and gone, bringing Ash Wednesday with him — a curious and perhaps ominous conjunction that I don't recall ever experiencing before. But perhaps it means nothing.

Dinner last night was superb: Cook found a fine thick rib-eye at the local meat counter, and prepared it inspired by a recent NY Time recipe by David Tanis involving salt and pepper, garlic and rosemary. The steak sweats in those flavorings half an hour or so, and is then cooked on one side in a very hot skillet, then turned and finished in the oven.

Potatoes as she often cooks them, in butter, with salt, pepper, garlic, and chopped parsley.

We did not have salad: instead, my favorite green leafy (well, one of them): Swiss chard.


Best of all, there was enough left of this feast (except for the chard) to have exactly the same meal tonight!

Posted by Charles Shere at 10:53 PM No comments:

Eastside Road, February 13, 2018—
MUCH CAN BE SAID — or written — about the show closing soon at the Wattis Institute, which, in the words of its curator Anthony Huberman,

A precursor of the show was Pontus Hultén's memorable (and Walter Benjamin-haunted) The Machine at the End of the Mechanical Age, which the lamented Henry Hopkins brought to the old San Francisco Museum of Art fifty years ago. That show, though, pondered machines, while this one ponders mechanism: the workings of machinery, whether physical machinery of substance or metaphorical machinery of concept.

(Of course I'm influenced by personal biography: my father was a sheet metal worker; I grew up smelling muriatic acid and solder and contemplating, fascinated, the emergence of three-dimensional forms from two-dimensional sheets of tinplate.)

Pushing the mind-body metaphor, Posenenske's duct-sculptured is inescapably figurative. The pathetic fallacy of the Industrial Age is the equivalence of mankind and machine. Fallacy has always its humorous side, the humor of absurd inevitability; Posenenske's work is the perfect introduction to the show.

Further into the Wattis galleries you stumble into a sculptural installation of iron spring traps, most of them likely from the 19th century — traps whose intended prey ranged from rats to bears. Duchamp's Trébuchet comes to mind: a strip of oak flooring with four ordinary coat-hooks attached to it, to be screwed down the floor to trap the unwary. One concept of conceptual art is its forcing of the viewer's mind to ponder — that word again — the continually expanding ramifications of the ideas implicit in the seen work, and rarely has "work" been a more appropriate word for it.

Has Mechanisms trapped you yet? Then perhaps it's time to consider the beautiful, pristine, contemplative, dedicated and disciplined work of the late Jay De Feo: a series of her inimitable mixed-media drawings on one wall, an installation of a grid of Xerox manipulations on another. In general De Feo worked from a real and ordinary object (a familiar readymade?), utterly divorcing it from its usual context, considering it as a three-dimensional thing valuable, for the moment, for her, as a bearer of form, defined by the curves and sheen of its surface, and above all a challenge (always successfully met) to the expressive ability of her hand and arm.

You see this in the mixed-media drawings, of course, whose beauty and truth led me to this installation in the first place; but also in the wonderful Xerox manipulations which, again, reduce three dimensions to two, another challenge to the mind's comprehension of what the eye sees.

Now we're ready for Louise Lawler, who prints her photographs specifically for the site displaying them. Formica (adjusted to fit, distorted for the times, slippery slope 1) is perhaps an extreme example of this: normally she stretches her photograph in one dimension or the other in order to make it fit the dimensions of the exhibition space; in this case she also distorts it, partly to mimic the curvature of the roof above, partly (no doubt) to refer to the distorting manifolds of the intellectual subject of the exhibition. And, the artist specifies, to reflect the distortion of the res publica since the most recent presidential election.

(It should be noted that the subjects of Lawler's photographs are themselves works of art, photographed as they are installed in galleries, that their display in other settings will be a kind of transplanting, thus a function within a cultural and societal mechanism.)

Another side of De Feo's example is explored in the elegant small sculptures of Zarouhie Abdalian, who chooses small metal hand tools, refines and nickel-plates them, and then assembles them into compositions without in any way attaching them to one another. You're forgiven for recalling a chance encounter of a sewing machine and an umbrella on an operating table. If you bump the sculpture stand (please don't) the assemblage is likely to fall apart and gallery staff will have to reassemble it (recalling their assembly, though with bolts and nuts, of the sections of Posenenske's ductwork). Another trap.

There seem to be endless discoveries in this installation. One more: Aaron Flint Jamison's Greaser, a slab of purpleheart (hardwood) formed of invisibly joined pieces, nearly twelve feet tall and perhaps half an inch thick, with a machine attached to its midsection causing it to vibrate nervously to a resonant frequency. The elegance of anxiety, or of excitation.

Mechanisms is accompanied by a catalog whose abstraction and intricacy requires more concentrated attention than I have had time to give until now; I hope to remedy this. There is also an extremely helpful guide to the exhibition with floor plans and detailed descriptions. The entire affair — exhibition, concept, catalog, individual works — can be exhausting, invigorating, meaningful, or overwhelming, depending on your mood and state of mind. So are we ever victims of our surroundings.

Posted by Charles Shere at 12:30 PM No comments:

Eastside Road, February 12, 2017—
AMONG THE HEROS, as I see them, the truest of the great painters of the San Francisco Bay Area in the great years of the second half of the last century, none produced purer work than Leo Valledor (1936–1989). Essentially self-taught, as I understand it, he exhibited early, at 19, in the pathbreaking Six Gallery in San Francisco.

He left town in 1961 to establish a career in New York City, where he joined five other California artists — including the sculptors Mark di Suvero and Peter Forakis, also emigrés from the Bay Area — in the founding of the legendary Park Place, where a new, formalist art emerged to succeed postwar Abstract Expressionism.

Perhaps Park Place was inspired by the Six Gallery; certainly in must have represented the breathing of new energy into the New York scene. There are various uses of geometry, however, and Valledor’s painting has always suggested the purity and idealism of geometry as a conceptual meditation on proportion, where other artists seem to explore more strictly visual expressions. Valledor’s work is often compared to Frank Stella’s, for example: but Stella’s use of shape and color seems to me to be what Duchamp dismissed as “retinal,” relying on purely sensual effect.

And Valledor is compared to Ellsworth Kelly; but Kelly’s hard-edged paintings are abstractions and (especially) croppings of realistically reproduced natural objects — often floral — whereas Valledor finds his imagery, apparently, purely within an intellectual imagination.

Providently Valledor (like Forakis) returned to the Bay Area in 1968, showing at the San Francisco Museum of Art and the San Francisco Art Institute, and teaching there, at Lone Mountain College and as a guest at UC. Berkeley.

There have been other Bay Area geometrical painters, of course: Thomas Akawie and David Simpson represent two poles bracketing others. Centered between them, I suppose, Hassel Smith, whose Search for the Source of the Nile was a truly great canvas, one of the finest of its period. (But clearly a representational landscape.) But one tends to site hard-edge abstraction within the Los Angeles area, when thinking of California, not within the Bay Area. In the south many, probably most of them were dedicated to substance and finish. But there too there is an Idealist: Robert Irwin.

I think of Valledor and Irwin as semblables, brothers in spirit. In their maturest work they appeal to the retina not simply to fascinate or please it but to engage its collaboration in an appeal to the mind. They are not illusionists: there work doesn't in any way trick the mind. (Though in the later paintings here, the "new slant" enjoys a degree of playfulness.) They are idealists, not abstracting away from anything but approaching pure abstraction on its own terms.

I am most moved, in this exhibition, by a magnificent series of three paintings from Valledor's middle period. And paticularly by the 1974 San Francisco Spring, whose perfection eludes verbal commentary — you simply have to stand in front of it, look at it with one eye and then the other, back away, reapproach, quit it and quickly turn your head to gaze at it again.

The current exhibition of Valledor’s canvases at Brian Gross is very beautifully installed and lit. Isolated respectfully on the end wall, San Francisco Spring reflects some of the color of Sunstrut, around the corner, separating the chaste silver rectangles in San Francisco Spring from the 1968 diptych East-West. Nothing I write can express Valledor’s brushwork, which is far from flat and featureless, but whose animation energizes the painting through capture of the light that falls on it, not through the dynamic substance of the acrylic paint itself. These surfaces are perhaps calculated, a bit self-assertive, appearing when closely inspected as if to confess proudly that, yes, an artist's hand has achieved this near-ideal refinement.

I suppose no artist could long remain in the rarified air of San Francisco Spring: the sudden yellow and more playful shapes of Sunstrut suggested the path that was to follow. The later paintings — sad to refer to the work of a gifted artist just fifty as "late" — retain the sobriety and elegance of the middle-period ones, but bring in a new instability. I suppose my favorite here is Ezistance (1986), a truncated equilateral triangle divided into three strips of near-value violet, purple and red (to grossly simplify color descriptions). The shapes of these strips — two elongated triangles flanking a rhombus — cause the canvas to vibrate between flat and folded, and the weight of the colors, the unease of the illusion, and the size (96 by 34 inches) make this a very imposing piece, gaining stability, even a kind of majesty, from its authority.

The gallery featured Valledor in a one-man show two years ago; I hope it continues this cycle in the future. The Neri show at Stanford's Anderson Center that closed recently and the Robert Hudson-Richard Shaw show (with Jack Stuppin) in Santa Rosa give me hope the glories of 1960s Bay Area painting are being revived for a generation not fully aware of the significance of its inheritance.

Posted by Charles Shere at 10:25 PM No comments: