The Pleasures of Travel

San Jose, California, September 23, 2011—
WE VIRTUALLY NEVER visit this city, the largest in the Bay Area, the third-largest in California (after Los Angeles and San Diego, and well ahead of San Francisco). And so I always forget how different it is from our usual haunts. The climate and demographic are different. The difference sets in as you travel down the Peninsula, whose smaller cities and towns — San Mateo, Palo Alto, Redwood City — seem more like Southern California than the Bay Area.

We're here for two nights, for entirely cultural reasons, as a friend wryly pointed out. Last night we saw Mozart's Idomeneo, a great opera all too rarely produced; tonight we go to the opening of an art exhibition for which I wrote a modest (very) catalogue essay. In between, a runout to Berkeley for an appointment; tomorrow, on our way home, a cruise on the Bay.

Before I get to Mozart, a few comments on the hotel. I keep a list of restaurants we eat in, updating it every month or so; I haven't until now thought of doing the same with hotels. We generally use Priceline to reserve hotels, because we like our hotels cheap: we sleep cheap, in order to eat dear. Sometimes we book conventionally, but we often use the blind "bidding" process, by which one chooses area, star level, and names a price, content to take what's dealt. 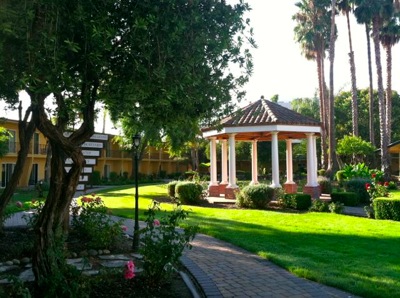 That's what we did this time, and the result has been rather a delightful find, the San Jose Airport Garden Hotel. This is a cluster of five or six twostorey buildings, each on the order of an ordinary Motel Six I suppose, surrounding a complex of lawns, pool, exercise rooms and the like. The "gardens" are set about with fountains and statues, and the lobby and corridors are hung with dozens, scores, perhaps hundreds of framed prints and paintings, all collected by a single former owner, a Persian with a curious eye attracted to gods, goddesses, philosophers, birds, and botany.

Statues, or at any rate reproductions of statues, reflect Greek, Egyptian, and Indian antiquity. One corridor boasts at least two dozen prints of good quality all of birds, and those on only one of the two long walls. Our own little bedroom boasts two original oil paintings, not particularly interesting: a Dutch or Belgian twostorey house by the side of a country lane and a vase of dahlias painted in high-relief impasto. But there is also quite a nice botanical print of anemones with leaves, flowers, and buds in various stages of maturity, nicely triple-matted and framed in plain oak.

The hotel has a history: it was the first Hyatt hotel in Northern California, built in the early 1960s. (So I was told by the present manager here.) It's surprising to be reminded that Hyatt hotels have not always been everywhere, and have not always been the interchangeable manystoreyed metropolitan behemoths so familiar today; a lot has changed since the Eisenhower administration. 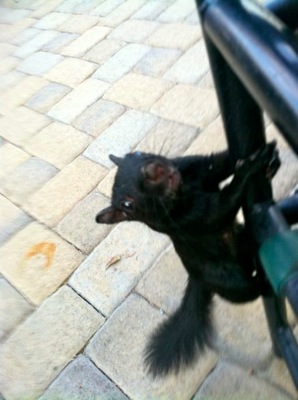 We just came in from a decent Martini by the swimming pool. Although the cocktail hour, we were alone except for two jet-black squirrels and one grey one, tame enough to come when I called them by clack-clack-clacking tongue between teeth.On, this evening, to an opening at the Triton Museum of Art, where Kenjilo Nanao is being given a mini-retrospective, along with Jamie Brunson and Heather Wilcoxon. I'd met Brunson many years ago; she recalled tonight that I was one of the first to review her work in the press; I liked the work here a lot — meditative yet retinally jumpy painting with very strong colors, monochrome, setting up persistent after-images.

I liked Wilcoxon's paintings too: in the Roy DeForest tradition, clearly post-Guston as well, intelligent and sassy and slyly organized behind their seemingly frenetic surfaces and subject-matter. (You can see this work at the Triton website.) 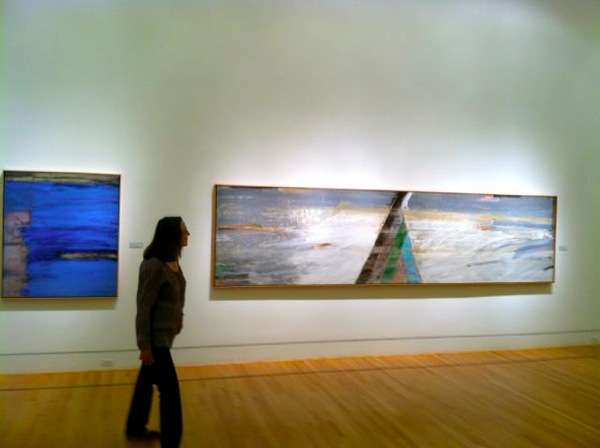 But it was of course Kenji's painting that brought us here, and they are magnificent under the strong white light in the museum gallery. As Preston Metcalf points out in the catalogue, Nanao mediates, or rather transcends the differences between, Abstract Expressionism and color-field abstraction. As I point out, the work is essentially landscape, or at least can be so read. It is sumptuous, rich, allusive, and utterly egoless, serene yet full of energy.
The main inspiration for this trip, though, was San Jose Opera's production of Idomeneo. Mozart composed it in 1780, just before his 25th birthday; it is his biggest opera, for a big orchestra, a huge cast; it is probably the last opera of its kind, to a libretto celebrating regal largesse — a piece that says goodbye to the Age of Kings.

Idomeneo was himself the King of Crete: returning from the Trojan War, victorious, he runs into a terrible storm at sea; pleading with Neptune for clemency, he vows to sacrifice to the god the first person — or creature, accounts vary — he sees on landing safe on shore. The first creature turns out to be his own son, of course: this is a version of the Abraham-and-Isaac story.

The opera was beautifully conducted, by George Cleve; very well sung, by a young, ardent cast; effectively staged; and set within a production owing a great deal to David Packard, whose archaeological enthusiasms and considerable resources combined to stage the action in quite persuasive reconstructions of the extroardinary beauties of the Minoan culture. Last year's tour of Sicily (speaking of the pleasures of travel) prepared us for enhanced enjoyment of this production, which should certainly travel to other opera houses. 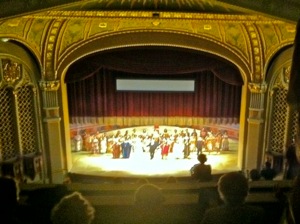 As to the opera itself, it is a magnificent musical monument and, in a production like this, performed as credibly as this, a work full of matter for contemplation. We're reminded that in all ages the gods are narratives constructed by the human mind to personify natural impacts & influences on the human experience. They are organized according to the prevailing social structural needs & assumptions: i.e. tribal-pagan, regal-monotheistic, etc.

Idomeneo is a transitional and decadent narrative: why was it appealing to a late 18th c. nobleman (Karl Theodor, Elector of Bavaria), who commissioned it for performance at a court carnival? The opera is about a king who errs (though through piety), but is forgiven and allowed to abdicate in favor of the son he was bent on but released from sacrificing: aren't there interesting subliminal correspondences between this and the plot of, for example, The Marriage of Figaro? What an interesting period this was, the fourteen years between the American War for Independence and the fall of the Bastille!
Posted by Charles Shere at 10:44 PM No comments: