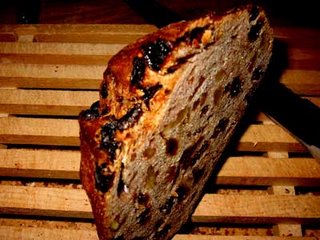 No butter, just a thin slice of bread. Absolute perfection. You taste the flour, the yeast, a teeny bit of salt, the raisins, the nuts. Everything in perfect balance. I have long believed that a true loaf of bread has only four ingredients: flour, salt, yeast, water. This bread of Joe’s persuades me there are two different kinds of perfection.
Posted by Charles Shere at 11:00 PM No comments: 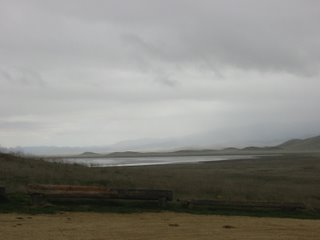 MORTALITY. Next day, though, we drove on down to Ojai, where Jim Churchill’s tangerines reminded us of the renewability of it all, and life was once again full of zest. And today the fine historical museum in San Buenaventura, and the fine Santa Barbara Botanic Garden; and tomorrow once more on the road, through the matchless Santa Ynez Valley.
Posted by Charles Shere at 10:15 PM 1 comment: 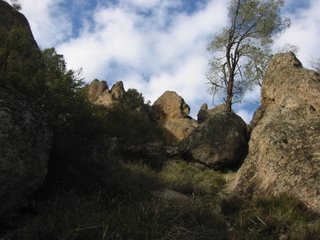 
Off south, mid-March, with two friends, to see if we can find some wildflowers.

Day 1, yesterday: South on 101, across a fine Golden Gate Bridge, stop in Woodside for a lunch in a bakery-cafe, then south on 280, back roads, 87. A discovery: Chitactac-Adams Park, a county park south of San Jose, with a fine interpretive trail and exhibit-room reconstructing the Ohlone community that once existed in this charming pastoral setting -- stream, oaks, boulders, oaks, wild plums.

On, finally, to San Juan Bautista, where stayed the night at the San Juan Inn, not terribly expensive, a walk from downtown; and dinner at the Basque restaurant -- don't go there unless you have the steak, savory and flavorful. The lamb stew unpleasant, I'm told; and the house red about what we'd have expected in the mid-1950s.

Up this morning for a walk through the Mission San Juan Bautista, recently and very nicely restored since the latest earthquake -- the painted decorations in the plaster nicely done, the museum exhibits polished up a bit though still lacking in explanatory labels (okay with me), the retablo a tad too operatic, the garden a real delight.

Then the slow drive down Highway 25 and a four-hour ramble through the Pinnacles. What a site! Amazing terrain, rock formations; the wildflowers just beginning -- bush lupine, paintbrush, Indian warrior, white ceanothus, monkeyflower, several others -- I'm no botanist. A fair amount of birdsong down at the parking lot, then silence on the trail, just as I like it. Snow, shade, sun, lichen, silence, rocks, vistas, woods, stream.

An hour's drive south, then turn east, through Coalinga, a snowy owl flying across the road in front of us, the motel, dinner -- expensive! -- at Harris ranch.

You can see more photos at


http://www.shere.org/pinnacles/pinnacles.html
Posted by Charles Shere at 7:50 AM No comments: