On the road again: Elfring trip

WE'VE BEEN TO SO MANY places with this couple, old friends, dear friends: Hans and Anneke, who live in Apeldoorn, Netherlands, but travel with us to Vancouver, Tahoe, Death Valley, Budapest, Vienna, Rome, Madrid, Friesland, and points between.

This time it's a wildflower tour. Well, the second week is: the first was spent relaxing for three days in San Francisco, doing the tourist things; then another two or three in Sonoma county. I won't bother you with details of that week, except to mention that we found a fine two-bedroom apartment in the Mission for the first four nights; that we visited the Mission and Basilica, Chinatown and North Beach, and ate at Foreign Cinema, Chez Panisse, Boulette's Larder, and the Empress of China. (Details on those over at Eating Every Day). 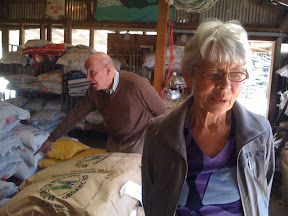 We took a trip up to Laytonville, too: a pleasure to attend High Mass with an Archibishop presiding one day, then the Long Valley Feed Store the next. And we spent a fine afternoon at Quarryhill Botanical Garden in Glen Ellen, and the mission and Vallejo's home Lachryma Montis in Sonoma.

Wednesday, though — two days ago — we hit the road, driving to San Juan Bautista for the first night. Here I revisited one of my favorite landscapes in the world, looking out from the mission over the San Benito Valley across the San Andreas Fault: an agricultural landscape that never fails to captivate me with its perfect balance of man and nature, agriculture and landscape, beauty and utility. It's an incredibly serene view, I think, particularly late in the afternoon. 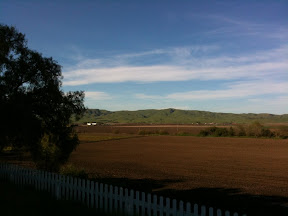 We spent the night at the Posada, enjoying the songs of the feral roosters, and took dinner at the Jardines de San Juan, an unexceptional kitchen but a beautiful garden setting.

Next morning, yesterday, we drove out to Tres Piños, then down the hauntingly beautiful Highway 25, encountering one or two other vehicles in an hour or more of driving. We ate our sandwiches at the Priest Valley Tavern, where we had a fine conversation with the proprietor; then turned south on the Parkfield-Coalinga road to tackle the Parkfield Grade. 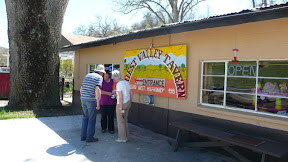 Why did I take no photos of that drive? After three shallow fords, easily taken even by a Prius, we climbed steadily, with dramatic vistas across the steep peaks and gulches of this part of the Coast Range, always following the San Andreas Fault. At the summit the asphalt paving gives out and the road is graded packed dirt and gravel down into Parkfield. It takes nearly an hour to cover these comparatively few miles, but the scenery is unique, and the evidence of human use — apart from the road itself — virtually nonexistant. 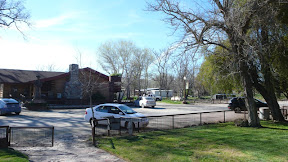 There's not much to Parkfield itself. Population 18, says the city limits sign. The post office and library have been closed, though the school remains. The steak at the café had flavor — it was raised on the local ranch — but the cuisine was basically cowboy cooking. (I like cowboy cooking, in its place, and this is certainly its place.) The lodge is comfortable enough, and the night is very quiet.

Today we drove out through Cholame, then down Bitterwater Road to California Valley and the Carrizo Plain. I've written about this place here before, here and here; I won't add much more today. The flowers, alas, are not spectacular this year; the big winter rains were followed by a false spring, then a cold spell, then more rains, apparently confusing the wildflowers. 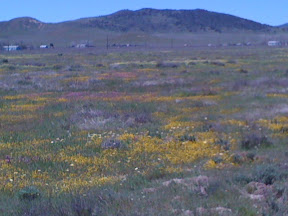 Still, the show's something not to be missed. The place is so serene, so calm and calming, and so incredibly big: our Netherlanders were more than satisfied, and so were we.

Tonight we stay in a place we've been happy with before, the Ramada Inn at the foot of the Grapevine. No place to eat but the next-door Mexican franchise, but it's fairly good. We'll manage. And tomorrow, on toward the high desert…

Posted by Charles Shere at 6:49 PM No comments: