Eastside Road, August 20, 2011—
WE SAW the Stein-Thomson opera Four Saints in Three Acts last night in San Francisco's Yerba Buena Center, where it was performed by Ensemble Parallele, about which company I wrote enthusiastically here a while back in connection with the Philip Glass opera Orphée. I don't have time at the moment to write more than that I think you should see this if you possibly can; it's one of the great operas not only of the 20th century but of any, and productions are rare, and this one is worth seeing. I'll have more to say about the production, and the opera, in a few days.
Posted by Charles Shere at 2:23 PM 1 comment:

FOR NO PARTICULAR REASON except that I just ran across it, while looking for something else, here's a piece I wrote for the Oakland Tribune on September 2, 1979:

The anguished question was directed toward a six-composer panel at the Cabrillo Festival here last week, and it stated a problem composers have faced for decades.
There's a continual distrust of new music. It's a joke, or it's too abstruse, or ugly. "My kid could make noises like that."

All six composers at the panel agreed that they didn't set out to compose music that audiences wouldn't want to hear. But it took 83-year-old Virgil Thomson to dissect the question with his scalpel-like intellect.

"The trouble is, 'audience' is a collective noun. You have to be very careful when you throw that word around. Audiences respond as a group. (That's why record reviewing is spiteful; because it's solitary.)"

At this point Garret List, a young trombonist-composer straddling new music and jazz, interrupted Thomson: "Who do you write for?" Thomson continued to elaborate his point:

"An 'audience' figures as sociology and economics, not esthetics."
Garret List wasn't listening. "Who do you write for, Virgil? Virgil?" He snapped his fingers to get Thomson's attention.

"No one knows what an audience is going to like," Thomson continued. "Or what a management can sell to an audience. And audiences are bullied. And we can only know what an 'audience' liked last year.

"There are fashions, trends--in orchestral tricks, or whatever--that follow unconscious folklore patterns. They are very hard to predict.'

He never let on that he'd heard List, but suddenly answered him.

"Gertrude (Stein) used to say, 'I write for myself and strangers."' List nodded agreement. So did the others.

"I am the listener I puzzle over when I'm composing," Eric Stokes said.

"Exactly," said Thomson. "And any passage that bores you a tiny little bit will bore others more. You can bet on it."

Which brought up another question: did these composers aim at complex or simple music?

"Simplicity," Lou Harrison said. "I always remember something Schoenberg told me when I studied with him: 'Nothing but the essentials."'

"Depends on the music," Thomson elaborated. "If I aim consciously it's toward simplicity where possible; but if complexity is necessary, not to fear it. I tend to think music isn't finished if you can subtract anything without injury. Music is a complex affair; the more we can simplify it, maybe, the better."

Some one asked about foundation grants.

"I think we had a more independent attitude before," Harrison answered. "Post-Depression young people can't conceive of grubbing."

"There are more composers now," Stokes pointed out.

But they allowed that they made a living somehow. How do composers make a living, someone in the audience wanted to know.

"The answer to that question is that it's none of your business how we make a living," Thomson replied. "How we compose is another matter."

There was laughter, then silence. Then, in a rare burst of emotion, Thomson summed it all up. He pointed toward something overhead; the small silent gesture galvanized the audience and panel.

"Calling," he announced. "We're playing a game of life or death. We must find ways of answering the calling--or choose death."
Posted by Charles Shere at 10:37 PM 4 comments: 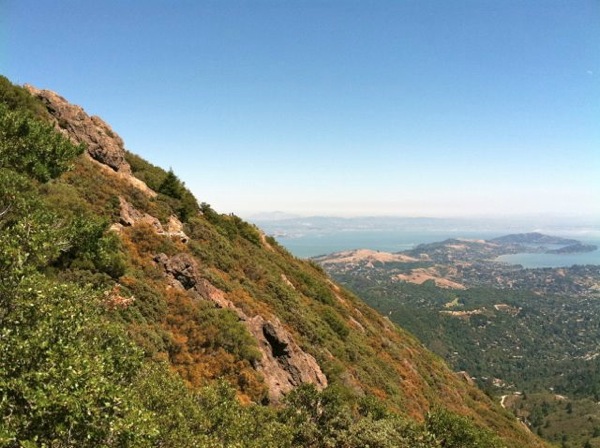 Looking east from the Temelpa trail, Mt. Tamalpais
THE FIRST STRENUOUS WALK of the year, far too long delayed: from Mountain Home, on Panoramic Highway in Mill Valley, up the old railroad grade past West Point Inn and on up to the East Peak; then down through the garrigue on the Temelpa trail to various fire roads and so back to the starting point.

I think this took about four hours or so all told, plus a half hour nibbling and resting at the summit. Glorious views, but of course hardly any can really be photographed.

The fire roads, and the old railroad grade, are comfortable but not terribly interesting walking: but they give fine views, especially over the luminous greys of fog out toward sea. There was too much haze to see much distance: in this photo you can barely make out Mt. Diablo to the east. The narrow Temelpa trail reminded me often of walking in Alpes de Provence, except that the smell is completely different. Is the oregano and thyme and lavender in the Provençal garrigue, I wonder, feral escapees from Greek gardens of 2500 years ago? Will the same happen here, a thousand years hence?
Posted by Charles Shere at 11:38 PM 3 comments:

No moon. The crickets
or whatever they are sing,
mindful of Late Works.

Posted by Charles Shere at 11:08 PM No comments:

Eastside Road, —
I'VE BEEN THINKING ABOUT language lately. No surprise there; language is one of my constant preoccupations. But specifically I've been thinking about what we used to call blue language, bad language, and its greatly increased presence in our daily life. It may not surprise you to learn that it's the Internet, and in particular Facebook, that's brought the subject so to mind.

Like many people my age, I suppose — I've long since entered my eighth decade — one of my main reasons for being on Facebook (and no, please don't look for me, the last thing I need is more Facebook “friends”) is to look in on the grandchildren. In the course of doing that, of course, I see comments posted by their friends. There are also the various nieces and nephews. And a number of them (not so much my direct descendants, I hasten to say) use language I find quite disturbing.

Now there's no question I'm a prig. I use the occasional four-letter word myself, but not that often. It still startles me to hear a woman swear. My mother never did, and the only time I've heard my wife use a four-letter word was years ago when, pushed to the limit, she suggested I go to hell. (When she pronounced the word it sounded like a place name; you could hear the capital “H”.)

I wonder as I read all these words what words these people use when they really need bad language. If they shut the car door on their thumb, for example: do they use the same word they use to describe a momentary annoyance?

I know: what most people intend these days, certainly what younger people intend, by the use of such language, is not what people of my generation or my parents' generation meant. Language changes, shifts. Declines, in fact, I would say, at least in this case. (I meant no pun there: sorry, grammarians.) But it's as hard for me to hear these words as inoffensive as it was, in remote antiquity, to hear soprano saxophones substitute for high trumpets in recordings of Brandenburg Concertos.

It's also true that people are more traveled these days, and different languages have different attitudes to this subject. The Dutch, for example, use what I think of as four-letter words to describe ordinary matters and events met in the course of daily life. They also use English four-letter words liberally, just as we Anglophones use a certain five-letter French word without really thinking about its literal meaning. I use le mot de Cambronne freely in English, but never in France, unless to say “break a leg” in French to a French performer about to go to work.

The problem with blue language is what happens in cases of linguistic asymmetry, when one party to a verbal exchange has a more liberal or a more literal relationship to vocabulary than does the other. If you call me by a name, or word, that's been internalized as A Very Very Terrible Thing to Say — “liar,” for example, was grounds for a thrashing in my childhood — it's very difficult for me to consider that you may be simply exaggerating, or in fact mis-using the word. “You lie” is used so frequently these days to mean “You're mistaken,” or even “I don't agree with your view.”

Posted by Charles Shere at 10:18 PM No comments: