In 1971 I wrote a piece of music called Handler of Gravity as the centerpiece of a concert of instrumental music from an opera, then in progress, based on Marcel Duchamp's painting La Mariée mise à nu par ses célibataires, même (usually translated as The Bride Stripped Bare by Her Bachelors, Even). Duchamp provided his painting with an extensive "commentary" in the form of notes, sketches and memos; and Handler of Gravity is based on one of these. 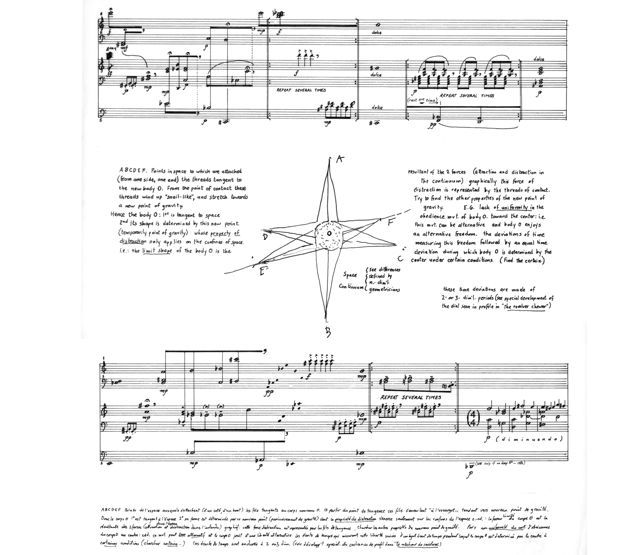 The complete score is available as a PDF on my website, but it'll take a long time to load!
The "handler" was to influence the Bride's decisions by responding to changes in a sort of gravitational field — the details are unclear, and in any case the handler was ultimately left out of the painting. Duchamp's note is accompanied by a sketch of a six-pointed star-shape surrounding a spheroid body; the six points represent points from which threads would stretch toward the central body, defining its location and shape by their tension.

Six systems of music, each lasting about a minute, were conceived as both linear and textural analogues of these threads. The unsynchronized repetitions and reinforcements in the music was meant to represent the variations and displacements of physical bodies caused by gravitational disturbances.

Much of this was suggested by the curious rhythmic disturbances which frequently characterize organists — or, rather, their performances. The result is a rather different kind of organ writing, a sort of comporomise between standard notation and a kind of tablature; the hope is to ensure an idiomatic organ character by harnessing the little clumsinesses of the instrument.

Handler of Gravity was premiered in the Chapel on the campus of Mills College on March 13, 1971. I think the organist's name was Ted Ashford; I can't find any of my concert programs at the moment. (When I looked for them just now, though, I did find my good pair of glasses, missing a number of months.) I wish I had a recording of the concert: it lasted an hour or so, and involved simultaneous performances of Handler of Gravity (with someone — David Smith, I see, now I look at the score, and, yes, it was Ashford — playing the optional chimes and glockenspiel), three graphic pieces for string quartet; and occasional overlays of Bachelor Apparatus, for four pairs of trumpets and trombones (they were stationed outside the chapel).


There have been three quite different adaptations of the original score, each about eight minutes in duration:

. New York: Scribner, 2009
A novel about five generations of women, from Dorothy Trevor (married name: Townsend), born 1880, died in London of self-imposed starvation in protest of the denial of voting rights to women, to her great-great-granddaughter Dorothy (later Dora, in honor of Dora Maar) Barrett-Deel, born 1989, enrolled at Yale where she is busy with, apparently, Women's Studies.

The novel unrolls through the central intelligences of seven of these women, beginning with Evelyn, the only one to speak in the first person:

Mum starved herself for suffrage, Grandmother claiming it was just like Mum to take a cause too far.

Immediately the reader's thrown into a group of interesting people, the more interesting because slow to be developed. Walbert's particularly good, I think, at balancing her characters and their settings — local, political, historical, psychological. Some of the characters, particularly the males, are shadowy indeed: but that doesn't make them the less present. Grandmother, particularly, while virtually never present on the scene, emerges as a strong, laconic, iconic presence.

I thought occasionally of Dorothy Richardson while reading this Short History, but I thought very often of Virginia Woolf, particularly of The Waves and The Years. (Amusingly, Dora mentions those of "V. Woolf" among her favorite books, "even the last two indecipherable ones." One of these days I must get to Between the Acts.) Walbert learned a lot from Woolf's discursive yet curiously elliptical way of covering long years of human lives, even generations, in expressive yet teasingly veiled pages.

I found the characters and the events of their lives absorbing, both for themselves and (perhaps especially) for their role in Walbert's artful historical allusions. Whether describing a late Victorian lecture hall or a beginning blogger a century later, her eye and ear seem sensitive and accurate. And there's an undercurrent of good humor here; everyone's too well grounded in the grain of daily life, privileged or not, to cultivate a drily doctrinaire view of the human condition.

There are plenty of reviews online: here, here, here, and here. All four of these correctly note the double value of the novel: as it is written, evolving through a complex of characters, settings, locales, and points of view; and for what it considers: "the woman question." That latter aspect is responsible for the online review I most enjoyed, here, because it most misses the point, ignoring the more basic matter: the novel for what it is.
Linda Hirshman writes

What happens when a history of women gets presented as a novel? Well, it finally gets such a history onto the cover of the Times Book Review. But, I would argue, something is lost. Presenting history as fiction immunizes it from just the kind of analysis and criticism women’s history desperately requires. …
To tell a story of five generations of women, from the hunger striking vote-seeker to the bisexual Yale freshman, is to stand next to historians of the social and political movement we call feminism, unmodified.

It is a fraught stance.

Though Hirshman does not really explain just what the stance is fraught with, she refers to Plato, and seems to be complaining that, being a novel, A Short History of Women cannot function honestly as history. Of course that was never Walburg's intention. Novels are not history; they simply enable us to understand the human condition within historical events.

. New York: New American Library, 1961
Why had I never read this before? I heard someone raving about the book on NPR a month or so ago, while driving up to Portland, and determined to read it as soon as possible. The very next day this ancient Signet paperback jumped into my hands in a used book store, and I read it the day after that, and re-read it a week or so later.

It's an amazingly beautiful book, full of striking physical description of both natural and human actions and events. Children from two families, of rather different classes, are sent home to England following terrific storms in Jamaica; they fall into the hands of pirates; ultimately they arrive safely to participate in a horrific trial.

Hughes seems to me to have discovered exactly the nature of the child's mind. Not the adolescent's: the child's. It is a strange and scary thing, strange because we rarely think much about it, scary because it is the kernel of our adult mind. I won't say more about this, except that it would be very nice indeed to spend an evening in the company of Richard Hughes and Robert Louis Stevenson.

. Salt Lake City: Gibbs Smith, 2009
Here's a delight, a sparkling, breezy book full of wisdom and humor, in a nice small package, with Pat McFarlin's hilariously accurate and insouciant drawings. The author's voice comes through so true and characteristic that you never doubt the accuracy of her interviews and quotes, and she records the confessions of a fascinating number of people.

They simply tell us what they eat when they eat alone. It's not what you might think. True, some — especially men — seem to take the easy way out: a sardine sandwich, say, accented with a bit of lemon juice; or fried polenta and cheese. Or fried cheese without the polenta. Others, though, cook imaginative and sometimes fairly complex dishes, perhaps returning to them for several consecutive meals.

Madison has two agendas here: to entertain and instruct her readers with workable recipes for dishes one might not think of otherwise; but also to investigate the resourcefulness and, through that, the human nature of the lucky friends who warm to her queries. There's more than a little philosophy and psychology here, but there's nothing dry or theoretical. As I said: a delight.

. New York: Broadway Books, 2009
I'll call him David: like Deborah Madison and Patrick McFarlin, he's a friend, and it's hard to stick to the professional surname style. David is a very funny man, and has grown over the years, through a number of books, to be an admirable writer. In this book he deals with more than just the food, though he does that very well indeed: he investigates his adopted city and its natives, their manners and methods, above all the insights into things more profound or complex that develop out of chance and trivial encounters.

There's a bit of Connecticut Yankee as Innocent Abroad here, though you'd never think of Mark Twain while actually reading Lebovitz. The history-fraught layers Paris imposes on the simplest transactions, so foreign and "indecipherable" to the caricature American tourist, really begin to divulge themselves on closer (and longer) acquaintance, and this book gives Paris and Parisians credit and respect for the subtlety, complexity, and above all pure quality of the delights they offer.

In short, more to this book than appears on its surface — yet a quick and very entertaining read. Everyone I know who's read it has been delighted with it. Me too.
Posted by Charles Shere at 5:00 PM No comments: