Commonplace: the sounds of forging (Dunham)

THE SOUNDS OF FORGING could be heard coming from every corner of the village — the three-beat rhythm of the hammer swingers striking metal on metal, the "light counterpoint" of the master smith tapping instructions on the anvil, "the muffled plops of the bellows," the scraping sound of the filing and polishing of tools.
—S. Ann Dunham, "Peasant Blacksmithing in Indonesia: Surviving and Thriving Against All Odds," p.499,
as quoted in Janny Scott, A Singular Woman: The Untold Story of Barack Obama's Mother (New York: Riverhead Books, 2011), p. 176

TYPICALLY AN ETHNOGRAPHY of a peasant group will devote a hundred pages or more to describing the agricultural sector in great detail, and then dismiss peasant industries in a few throwaway lines. Peasant industries are frequently characterized as "spare time" activities, low in productivity and profitability, which are carried out mainly by poor women and children, and then only when they can find no agricultural work to do…

[Peasant society] produces rural generalists rather than specialists. By this I mean that nearly every peasant has a repertoire of various skills which can be utilized for productive or income-generating purposes. A Javanese man, for example, may have skills in plowing and land preparation which are related to rice agriculture, but he may also know how to repair bicycles, make bricks, drive a pedicab (becak), raise fish or eels in ponds, make noodle soup and hawk it around the streets of a nearby town, etc.

Similarly, a Javanese woman may have agricultural skills in transplanting, weeding and harvesting rice, but she may also know how to make batik cloth, operate a roadside stall or coffee shop (warung), collect teak leaves from a nearby forest for sale as food wrappers, trade vegetables or spices in a nearby marketplace, deliver babies for her neighbors, make palm sugar or cassava chips, etc."

Commonplace: "where the poetic and the prosaic share space" (Soetoro-Ng)

[SHE] WAS INTERESTED in the place where vision meets execution, and where the poetic and the prosaic share space. She loved the way something beautiful could speak about the spirit of both the maker and the owner; the skill and soul of the blacksmith are revealed in the keris, but so too is the desire and perspective of the buyer.
—Maya Soetoro-Ng, foreword to S. Ann Dunham, Surviving Against the Odds: Village Industry in Indonesia, ix-x,
as quoted in Janny Scott, A Singular Woman: The Untold Story of Barack Obama's Mother (New York: Riverhead Books, 2011), p. 155

Posted by Charles Shere at 2:49 PM No comments:

Eastside Road, September 19, 2012—
WHAT AN APT title: A Singular Woman, a biography of Stanley Ann Dunham, the mother of Barack Obama. Janny Scott has given us a detailed, concise overview of Dunham's formative childhood, her career, and her character: taken together they provide a portrait not only of the woman, but of one important aspect of the times she flourished in, roughly the mid-sixties to the end of the century.

Brought up peripatetically — her father alternated between salesman and student, moving his household from El Dorado (Kansas) to Berkeley to Wichita to Ponca City (Oklahoma) to Seattle during her grammar-school years — Dunham went to high school on Mercer Island, a suburb of Seattle; then moved with her parents to Honolulu, where she attended college, majoring in anthropology.

Scott's biography begins wisely with a full portrait of Dunham's mother, née Madelyn Payne, and even of her mother, Leona McCurry. Indeed one of the unstated subtexts of the book is the persistence of the maternal strain through these generations, the power and influence of the character traits, the "values," formed and transmitted through the maternal side of the family. This gives considerable insight into the personally held values informing President Obama's political agenda: indeed, an important aspect of Scott's book is its identification of the liberal agenda of contemporary social democracy with the timeless values of communitarian society.

The subtitle of the book seems at first unfortunate, purely a marketing ploy: but it reveals the immediate journalistic value of Scott's achievement, which began in the first place with an article she wrote for the New York Times during the 2008 presidential campaign.

But the lasting value of her book will be its double portrait of Dunham herself and the unique moment of her career: Indonesia (and specifically Java), roughly 1970-2000, where she first pursued anthropological field-work, concentrating on small village industry (metalworking, basketry, ceramics, textiles); later worked with NGOs administering microbanking activities.

If the belligerent aspects of the twentieth century could be set aside, another side of it could be seen with greater clarity: its flowering of the intercultural encounters that had begun with the voyages of the fifteenth century, had gone wrong with European colonialism, had further deteriorated with global commercial exploitation, and had reached a climax with World War II. Janny Scott depicts the best possible view of this encounter, when the humanistic aspirations of cultural anthropology join village pragmatism to modern but local technology, whether physical or — as in the case of microfinance — administrative.

Further, her description not only of Ann Dunham but of her parents reveals the presence, during that moment — from the mid-sixties on — of a personal attitude, or orientation, that may be held by only a minority but that has nevertheless significant implications for the future of our society: an attitude that the dollar is not important for itself but as a means of living, working, and effecting personal and societal progress and justice.

Ann Dunham made a number of decisions most would find unwise or rash — if, that is, they were "decisions" in any useful sense of the word. She was apparently swept off her feet by her first romance, with a foreign student from Kenya who she met in Honolulu: the result was her son Barack and her first marriage.

Later, a similar romance led to her second marriage, to Lolo Soetoro, who she met at an "Indonesian Night" reception at the East-West Center, also in Honolulu. Intercultural encounter can be literally generative: this produced her second child, her daughter Maya, now, since her marriage to a Chinese-Canadian, Maya Soetoro-Ng.

Neither of Dunham's marriages worked out in the conventional sense: Obama senior left Honolulu for graduate work on the East Coast, then returned to Kenya; Lolo Soetoro, after his and Dunham's divorce, ultimately remarried an Indonesian woman with whom he had apparently been long involved. Scott's treatment of these narratives is matter-of-fact, illuminating, and sympathetic. In fact the marriages did work out; they worked themselves out, or the partners out of the marriages. Dunham was meant to follow her own way, to pursue her interests and her work.

A Singular Woman is I think a uniquely American story; but America is divided. The liberal side of Kansas; Berkeley and Honolulu; the liberal arts; the world of international NGOs form Blue American: Red America — ironic that a color once associated with Communism now characterizes conservative Republicanism — will hardly approve Ann Dunham's "decisions."

The book has its production problems. There is no index, though the pages teem with people, places, institutions, and ideas. The photographs are for the most part badly reproduced and far too small on the page.

Scott narrates the book as a journalist, not a scholar. This is mostly a good thing: the prose moves forward with considerable momentum, even though outcomes are telegraphed; and the vagueness or, more often, ambiguities of her sources are met honestly with the author's own voice present in her accounts. The tone is often conversational, as friends, lovers, associates of Dunham's step forward either in person or through allusion to offer insights into the motives and interests of this remarkable and, yes, singular woman.

I'VE ALWAYS WANTED to climb Mt. Shasta. We drive past it so often; it's so majestic; so serene. In the last couple of years one of my grandsons has taken to mountaineering with a lot of enthusiasm, so this summer I suggested he accompany me — actually the other way round — and last week, on Labor Day weekend, we did it.

It was a strenuous hike, and to tell the truth I didn't make it to the summit, but I'm satisfied. I thought about putting a description of the two days here, but it doesn't quite seem like Eastside View material (correct me if I'm wrong), so you can visit three webpages describing the hike in some detail, with photos, starting HERE. 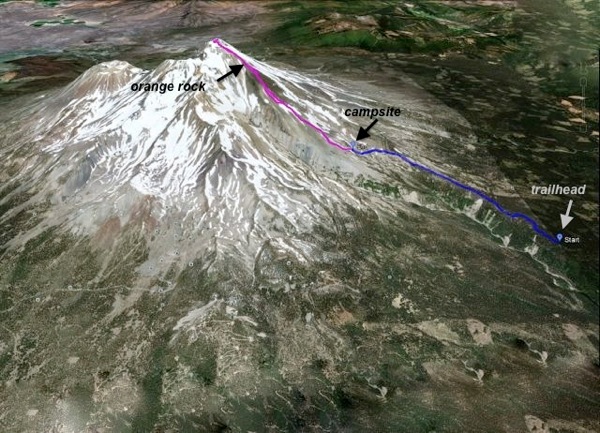