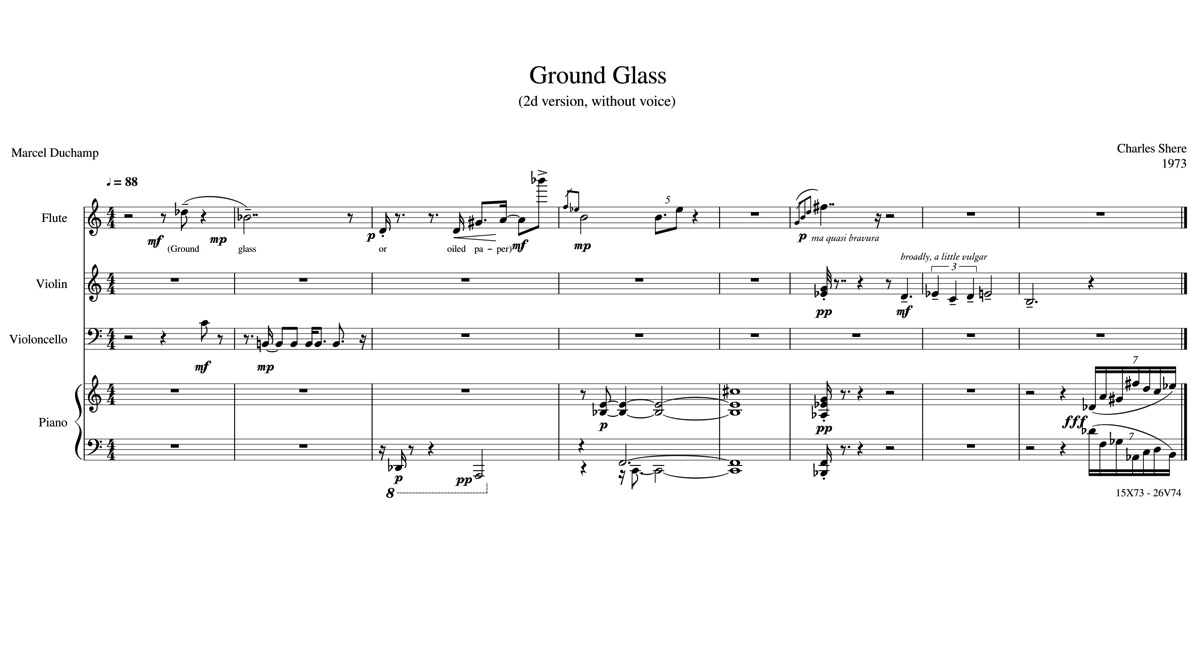 IN THE LATE 1960s and early 1970s I was interested in making short pieces of music. Some of them were really short. The first was for solo French horn; the second a duet for 'cellos. Some of them were songs, as I was then also preoccupied with setting texts from Gertrude Stein’s Tender Buttons.

The other day, looking for something else, I ran across copies of the manuscript scores of two of these — settings of fragments from Marcel Duchamp’s “Green Box,” notes he assembled while working on his “Large Glass,” La Mariée mise à nu par ses célibataires, même, which I had been spending a few years turning into an opera.

I always had the idea of these little things being able to stand on their own, as essays in mindfulness, perhaps. It’s hard to get anything from them on a single hearing, because they barely start before they are over. Classify Combs was an attempt to deal with this problem, using repetition not in order to hypnotize (or bore), or in order to build incrementally to an effect — two procedures then in vogue among “minimalists”, who knew their Schubert, Bruckner, and Sibelius — but in order to give the listener time to adjust to the aural fact being presented by the performers.

I think I was trying to transfer a visual problem — how to enter a painting fairly completely, screening out visual distractions, and without considering the amount of time being spent — to a musical environment. Notated music, to me, involves a merging of aural and visual activity. I like to attend to the architecture of the page, the spatial distribution of the notes, and the gestural activity of the phrases visually as well as aurally.

Classify Combs seems vertical to me, tilting upward the perception of time, normally linear like landscape. Ground Glass is more conventional, a small fragment of a horizontal landscape. The critic in me, working long after the composer made the songs, finds this duality of approach perfectly explicable: the former piece is Duchamp’s note to himself concerning an abstract way of doing a distributive thing; in the latter he’s contemplating the choice of a medium (ground glass, or oiled paper) on which the result of such a distribution will take its final place.

Anyhow. You can see the scores of these two short songs here and listen to mp3s of synthesized versions of them here and here.

IT HAS BEEN quite a while since my last post here. Not because I haven't been breathing; far from it. We spent four weeks on the road, on a trip with six stages, each of which was packed with input: friends, family, landscape, dinners, incidents. Those of you who attend to my other blog Eating Every Day will have followed those days through a number of restaurants. There are so many things to do in this fascinating life, and increasingly so little time in which to do them! But I'm back at this Eastside View, and we'll see what happens next…
Posted by Charles Shere at 11:27 AM No comments: