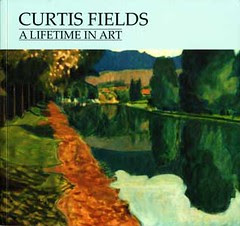 CurtisFields
Originally uploaded by charlesshere.
A MAN I HARDLY KNOW sends a copy of his new book, Curtis Fields: a Lifetime in Art [ISBN 0-9766520-0-5]. I met Curtis at the birthday party of a mutual friend, as Dickens says, some years ago. He was a handsome, quiet, tall man; in his seventies, I thought. Conversation was guarded at this party, which took place in a small Napa Valley winery. Lindsey and I were, it seemed to us, among the few people present who had not voted for the current occupant of the White House, and neither politics nor even many cultural issues seemed suitable ground for table talk at what was after all meant to be a festive occasion.

As the party was breaking up Curtis mentioned that he was a painter,and that he had a show up at the moment, in a small art gallery in Tiburon, and would I like to stop by and see it and let him know what I thought.

Since we were driving down to San Francisco a few days later we stopped off. We liked much of what we saw. His paintings don’t break new ground. They’re easel paintings, never more than four feet in either direction, very colorful, quite representational, with enough internal life and motion to be interesting even though they shun any attempt at intellectual content.

I’ve always been a sucker for this kind of thing — a weakness that certainly hampered my credibility as an art critic, back in the days when such a thing mattered, if it did. Gradually I’ve come to understand the reason for this weakness: my growing up in the country, away from intellectual conversation, from trips to museums, but constantly within the beauty and the vitality of nature.

I dropped Curtis a postcard to tell him I liked much of what I’d seen, and a while after that he wrote asking if I’d mind writing a paragraph or two about his paintings, explaining that he’d use them in a book he was assembling .

I explained that this wasn’t the kind of thing I did, but he countered that I’d recently written a catalogue essay for a gallery (a retrospective of paintings by Jack Jefferson), and all he wanted was just a few sentences. So I obliged.

He asked what I’d charge, and I said forget it, and he insisted, and I said Oh just send me a little drawing, a very little drawing. And he did, a charming ink sketch of a farmhouse among pines and blossoming fruit trees somewhere in Tuscany.

And now the book has arrived. I like leafing through it. I like seeing the unpretentious depictions of places he’s enjoyed: Tuscany, Mexico, California, Provence. Who doesn’t enjoy such places?

I like the still lifes and especially the interiors, which remind me that the interiors of familiar rooms, bedrooms and living rooms and especially dining areas, have a life of their own, even when they’re not occupied, when they’re “empty,” partly because of the meaningfulness of the ratios of their heights and widths and volumes, of their colors, of their light and shadow, and partly because of their memories of the life we’ve left within their walls the many times we’ve occupied them.
Posted by Charles Shere at 1:02 PM

I like his stuff - but cannot find where to purchase any prints.