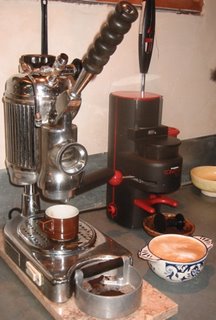 THE BAD NEWS IS, it’s in Palo Alto. Not very likely I’m going to drive two hundred miles for coffee, not even really good coffee.

But the good news is, my very favorite coffee in the world is now available here in the USA, and it’s only a couple of hours away. And after all I do occasionally get down near Palo Alto. And, who knows, maybe they’ll ship me a pound from time to time.

We’re talking about Cafe del Doge here. I first ran into this rich, complex, yet completely friendly coffee in Venice, in the café by that name, not that far from the Rialto as I recall -- it was a little while ago.

Later I found it in Treviso, a few miles north of Venice. In Italy Cafe del Doge has a fairly good web presence, but the coffee itself was nowhere to be found outside the Veneto, where it’s blended and roasted. In Rome, for example, no one I asked had heard of it. Oh well: Tazza d’Oro wasn’t a bad substitute, while we were in Rome.

Here in northern California, though, my favorite coffee remained Mr. Espresso, which we’ve been drinking for years -- at home, at the bar upstairs at Chez Panisse, and at the Downtown Bakery here in Healdsburg.

I like Mr. Espresso and I like Carlo who runs the company. His mechanics have done a good job keeping our old Faemina running. When you depend on a machine that’s a half-century old for your morning coffee you come to appreciate that.

So I felt a little disloyal a couple of months ago when a new roastery opened in Oakland, providing a coffee very close to Tazza d’Oro -- so close I had to switch to Blue Bottle.

Blue Bottle sells a number of blends. It’s the Romano blend that approximates Tazza d"Oro, and you have to get it early in the week; it seems to sell out quickly. Then too there are only so many places you can find it: the Berkeley farmers’ market, the Oakland roastery but only Monday and Friday. And the "kiosk" in San Francisco, on Linden Street a few doors west of Gough, in Hayes Valley. 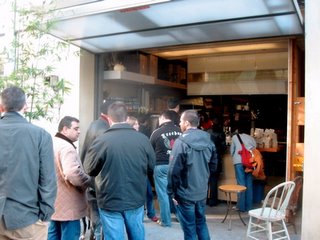 We stopped at the kiosk yesterday for an espresso. At about 3:30 there was a line of perhaps a dozen people patiently waiting at the counter; the line trailed out onto Linden Street itself -- fortunately a little-trafficked alley.

But they were out of Romano. Too bad, as I wanted to taste it right then, to compare it with what lingered in memory of Doge -- for we’d stopped at Caffé Doge about noon.

THE CAFE ITSELF, at 419 University Avenue, Palo Alto’s Main Street, is stylish, comfortably exciting, at least to me. There was a real Italian working the machine: his English is pretty shaky, and you’re better off talking to him in Italian. I asked him what Caffe del Doge was doing in California: we have a friend here, he answered simply, and he made this possible. 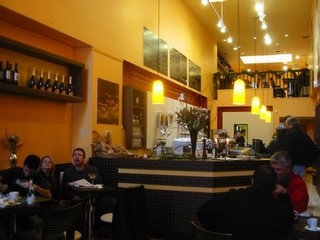 We had a delicious cup of the Doge Rosso, which is one hundred percent Arabica, and we split a prosciutto sandwich, a panino on a soft rectangular roll, not too soft of course, with a little butter and a good supply of lettuce and a very judicious amount of pickle -- a beautifully calibrated set of flavors. And then I had a second ristretto, this time Doge Nero, which is a blend of Arabica with other coffees: I find it less redolent, less chocolatey, but Lindsey thinks it smoother. So we bought three quarters of a pound of each, in the bean, and soon we’ll see how well they serve as our every-morning coffee, taken by Lindsey with a great deal of hot milk, really a sort of café au lait, and by me more as a cappuccino.

And I have a hunch I’ll be switching brands for the second time in just a few months. Sorry, Mr. Espresso; sorry, Blue Bottle; I love you both, and I’ll dally with you again from time to time. But for now my heart’s in the Veneto.

WELL, THAT HAVING BEEN WRITTEN, we’ve had breakfast. Lindsey: You know, I like the Blue Bottle better. This [Doge] has a bitter undercurrent.

She's right, of course. But it has to be pointed out that she puts a lot of milk in her coffee, or rather a very little amount of coffee in her milk. I made my usual breakfast caffelatte with less milk than usual the second time, and liked it more. But the fact is that Doge, in my opinion, does not carry milk well: a doge is not a cow. It makes a fine espresso and a fabulous ristretto,, both with the requisite amount of sugar. (The need of espresso for sugar is a subject for another day.)

So after we've run through this supply it'll be back to Blue Bottle. Unless something else turns up in Portland next month.
Posted by Charles Shere at 8:05 AM