Experience and enchantment: another weekend in L.A. 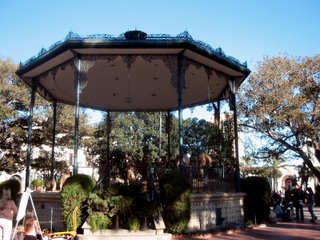 ON THE ROAD again last weekend, this time a quick trip south to see two plays at A Noise Within in Glendale, staying at a cheap motel on Colorado Avenue. Eat dear, sleep cheap, is our way.

Friday we ate dear in Ojai, taking a couple of friends to Auberge at Ojai, formerly L’Auberge — an interesting, local and seasonal menu and an enterprising winelist in a relaxed homey setting with rather elegant appointments, as I just told Zagat. I’m glad I went. A simple green salad, then beef cheeks, full of flavor, with a bottle of good Rhone red.

Next morning we had an errand: make a delivery to a guitar shop in Playa del Rey, a funny village on the coast (of course) under the flght lanes from LAX. This is one of those towns where you think you’ve driven back forty years — calm, modest, funky. The shop was interesting: a triangular building whose top (second) floor is one large open room with first-rate acoustics. Any guitar aficionado in Los Angeles should surely be familiar with Trilogy Guitars: a recital in that room would be a real pleasure.

While in town we had an okay lunch at Bistro de Soleil, 6805 Vista Del Mar Lane, on a corner of the main drag. Funky indeed, with outdoor seating on a scrappy patio, a full bar, a decent croque-monsieur and reasonable prices.

Friday night Lisa had told us about a must-see museum in Culver City, the Museum of Jurassic Technology, and it was just a few miles down Culver Blvd. in the direction of Glendale, so off we went. Emma sighted it, just as I was giving up on it — right across the street from the theater where The Actors’ Gang plays, so it’ll be on our regular beat from now on.

There’s not a lot to say about the Museum. Lisa had described it to me accurately: dark, inscrutable, completely devoid of irony, attentive to museumship — a museum ofmuseology, you might say. The floor plan is disorienting, and the darkness encourages a total immersion of the visitor in the exhibits — you’re either totally involved, or totally repulsed: Emma and I found ourselves creeped out after a half-hour or so.

Others have described the Museum well, especially Megan Edwards; I won’t even begin to describe the contents here. Instead I’ll tell you what I thought while hearing Lisa tell me about it, because exactly the same thought accompanied me all the way through the Museum:

Benjamin’s idea of a social utopia hinged on his theory of “experience.” Like many thinkers of the time, he believed that experience was among the casualties of advanced industrial society, which had rendered everyday human interaction entirely functional, utilitarian and impersonal. He shared Max Weber’s belief that the modern world had undergone a process of “disenchantment.” The march of progress had cruelly denuded life of all mystery, solidarity and human warmth. Unlike Weber, however, Benjamin urgently advocated the re-enchantment of the world.

That’s from a review, by Richard Wolin, of a number of Walter Benjamin books. It ran in the Oct. 16 issue of The Nation (it takes a while to catch up on things). Turned out Benjamin was a favorite of Lisa’s, too. I haven’t really read Benjamin, myself, though I’ve dipped into The Arcades Project from time to time; it’s the kind of book that doesn’t suffer from that kind of reading.

The Museum of Jurassic Technology would clearly agree with Benjamin about re-enchantment; that’s what its exhibits documenting weird, marginal, haunted, obsessed investigation are all about. Many of these investigations are also about the tiny, what Duchamp called infra-mince, things — I can think of no better word at the moment — so small they almost leave thingness, substance, and become instead conceptual. But I give up: a blog is no place to pursue a subject like this further.

Saturday night we saw As You Like It, one of the two Shakespeare comedies (the other being, of course, Twelfth Night that seem perfectly inevitable and, therefor, perfectly indispensable. I won’t bother to “review” the production, since it’s closed now: but I will say that it seemed to me the most successful Shakespeare play we’ve seen this company do, and we’ve seen a number of good ones, since they give two each season. And it was Michael Michetti’s debut as a director here, so that augurs well for future productions. I hope.

Sunday night was even better, a tight, driving production of Eugene O’Neill’s A Touch of the Poet, with an amazing, memorable, fierce portrayal of the lead character by Geoff Elliott, and fine, sympathetic realizations of the difficult female roles by Brigetta Kelly (Sara) and Derborah Strang (Nora). O’Neill always seems a little creaky to me, a little dated; on the other hand, it’s important to consider this assessment of the underbelly of the United States as it was emerging in the early 19th century, as seen by a moodily brilliant victim of the early 20th.

A Noise Within does six plays a year: two Shakespeares, one or two other classics, one or two newer vehicles. Earlier this fall we saw them do Racine’s Phaedre, beautifully; next spring we’ll finish the season with Romeo and Juliet and Joe Orton’s Loot. (We’re skipping Man of La Mancha.)


SUNDAY MORNING WE BREAKFASTED with friends at a place they knew about: Auntie Em’s Kitchen, out in Eagle Rock (4616 Eagle Rock Blvd., Los Angeles; (323) 255-0800). This turned out to be another retro exercise: the 1950s seem never to have left these pockets scattered across the second-biggest city in the country. Eagle Rock, like Playa del Rey, is gentrifying somewhat; property values are up; but the look and feel of these places is somehow still frozen in the 1950s — maybe because of the wide streets and low buildings, the consequent nostalgic imminence of the overhead electrical lines, the palms. (Or maybe it’s just me, nostalgic for my own first stay in L.A. back in the 1950s.)

Auntie Em makes a nice bacon-and-scrambled-egg on buttered toast, the bread from the La Brea bakery, and the house scones are nice; they only lack an espresso machine for the perfect breakfast spot. We’ll be back, nonetheless.

Then it was on to the Museum of Contemporary Art (MOCA) to see a truly absorbing show, Skin and Bones, filling the galleries with fashion and architecture, occasionally forcing the analogies a bit but still giving the visitor a lot to think about — in addition to room after room of truly fascinating and often truly beautiful fashion design.

One result was to make me think that it doesn’t really matter how extreme fashion is; a dress or a suit of clothes is no bigger than the person wearing it (well, not much bigger anyway); but extreme architecture poses a serious problem in its visible interaction with its environment — the more so when the environment is natural or, if urban and therefor synthetic, architecturally orderly.

Maybe that’s one reason I like those “retro neighborhoods”: they’re orderly, even in their disorder, because there’s very little dominating going on; the ensemble remains more significant than any one detail, though the grain of the detail is itself absorbing.

Los Angeles offers continual examples of this alternation between architectural imposition, like Frank Gehry’s Disney Center (which I loathe, and Lindsey does not), and areas of unobjectionable architectural character. But I close this long long blog with one particularly interesting neighborhood: Olivera Street and Union Station, which face one another across a busy street a little off-center from the downtown center embracing Disney Center, the new Cathedral, and MOCA.

The Spanish language was paramount, of course. Wealthy people rarely ride trains these days, at least here on the West Coast; AMTRAK is only a small cut above the Greyhound Bus. There’s a nice bar, Traxx, in Union Station, and its table seating was full, but the coffee outlet was busier, and there we went for a quick cappuccino, which we drank in one of the patio waiting rooms, nicely gardened, really looking quite a bit like the cloister gardens in the Missions running up and down the old Camino Real.

Union Station has been spiffed up considerably, and the waiting rooms look great. Built in 1939 and considered the last of the great public rail stations in this country it too is nostalgic, and I thought a little bit about my feelings two weeks ago about the great railroad stations in Europe (see the Nov. 20 blog below, “The Companionship of Strangers”). Union Station, of course, no longer serves that public purpose; it does not comfortably mix the poor and the wealthy, it does not teem with life and fascination; its geometrical beauty (greatly enhanced by its fabulous natural lighting) is more mausoleum than meeting-point.

This is certainly not the case across the street. The old Plaza, with its lacy bandstand (photo above) presently filled with a life-size Christmas crèche, is an outdoor living-room for families, tourists, and locals; and the market street, though crammed with kitsch often of dubious origin, is colorful and busy. Old men stand around playing guitars and singing; kids buy souvenirs; the same restaurants and candle shops line the street that I recall from fifty years ago.

People seemed relaxed and happy: when I hesitated over buying a wallet, then decided not to, the proprietor of the stall smiled broadly and wished us well. The life-style of Olvera Street is Latin, pleasant, oriented more to the pleasantness of the moment than to climbing to the top of anything. That’s retro too, I suppose, and it’s analogous to the neighborhoods I prefer, those where ordinary daily transactions are more important than some kind of architectural or commercial Importance.

There’s more to say about this, but you’ve read enough.
Posted by Charles Shere at 8:31 AM