THEY SAY OURS IS a "Mediterranean climate," meaning wet winter, dry summer. We had just under a tenth of an inch of rain on Tuesday, very unusual here; enough to sell a little sulfur to the grape growers no doubt, but hardly enough to do much for our poor ornamentals. The Italian cypresses look fine, except for the ragged edges the damn blackbirds and starlings make with their busy commutes; and Lindsey's garden is flourishing, thanks to her frugal driplines.

I'm worried about our pine trees, though. Look at the one in the center of the picture, just beyond my workshop: it's dry and nearly transparent. It's an Italian stone pine; we planted it and three others not in the photo, partly for their wonderful sculpture, partly for their tasty pine nuts. This tree is clearly failing, and I don't know why. I notice another, four or five miles away at the entrance to Rodney Strong Vineyards, is beginning to show the same distress; and I'm not too happy about the appearance of the three pines we planted on the fenceline out of sight to the left of this photo.

The dry weather is normal, and the heat is not really abnormal. It hit close to 100 degrees a few weeks ago, and the low to mid nineties last week; but as they say it's a dry heat and not really enervating. We open all the windows at night and close them first thing in the morning; our concrete floor keeps the house cool; we don't need air conditioning.

Up at the top of the photo, beyond our fenceline, south of our house, that's the neighbor's vineyard. We don't see it from our house; this photo was taken from above, near the fenceline on the other side of our place. From our house we see almost nothing but our own place, and that's how we like it. But Gary's vineyard is only 150 feet from our front door, and what a difference! It's irrigated, of course, green and lush, unlike the sere hillside we call home.

In fact we're surrounded on three sides by these vineyards. This has its advantage: they make a fine firebreak. I used to worry about fires blowing in from the north or east; no longer. But the vineyards bring prosperity, meaning inflated land-values; and the people who own and run these properties are constrained to keep the profits coming in. Rosenblum, our north neighbor, recently subdivided his acreage; a big winery-tasting facility is going up just the other side of our north fence. 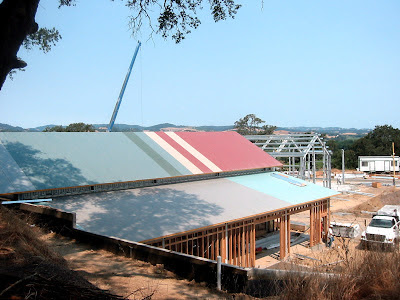 I've met the man who owns this winery, and he seems like a nice guy—quiet-spoken, aware of ecological considerations, modest rather than over-ambitious in his plans. But look at the size of this place, and think of the money involved! His backers are going to want to see returns, and however modest his current plans may be there's always the threat that continuing demand for investment return will lead to bigger and more profitable production.

I mentioned Michael Kincaid the other day. Another of his aphorisms:

and my old friend John Whiting sums up the result of this "progress" in the working title (I hope he keeps it) of a paper he's polishing for this fall's Oxford Symposium: Eating the Earth.

We do indeed eat the earth, and we must eat it slowly and respectfully enough to allow it to recuperate. We are not the first farmers: Earth is. Earth tends her gardens and her livestock, responding like any farmer to the changing influences of rains and droughts, gullies and deposits. Her time-scale is not ours, it goes without saying. Much of the time her scale is immense, with cause and effect separated by unimaginable (or at least unexperienceable) spans of time.

On other occasions, though, her time-scale is impressively immediate. We had a noticeable earthquake on the Hayward Fault last week; things were broken in Berkeley. A day later there was a smaller quake up this way, near the Geysers, where clusters of small quakes have become commonplace since the city of Santa Rosa began pouring its treated wastewater down nature's steam vents.

I try to keep the cosmic perspective in mind; it eases apprehension. Given enough time, Nature will prevail. There is no right configuration of ice caps, deserts, temperate and torrid zones; only our own desires can qualify one fleeting configuration as "better" than another.

On the other hand... I'm concerned about that pine.
Posted by Charles Shere at 10:36 AM

Thanks for this great post, I've printed it out and put it in my copy of Virgil's Georgics.