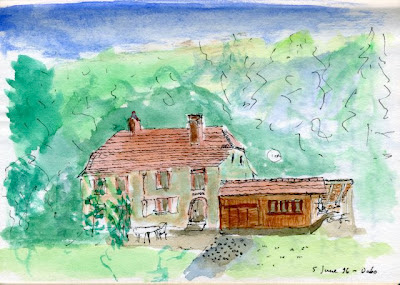 IN JUNE 1996 WE SPENT a couple of weeks in this house outside of Dabo, in the hills in Alsace, and there I worked on two compositions: a long piece for solo piano which managed to get completely sketched, then completely stalled; and, a more pressing concern, a trio for violin, piano, and percussion, which had been commissioned and was to be performed later that year. Over the years I've written much of my music in Europe; we used to spend a month or two there every other year in the years we were working, taking leaves of absence and dividing our time between touring and staying put.

This turned out to be my last European composing stay, however. The Trio seemed so valedictory when I heard it performed — so remote, objective, and phenomenological; so devoid of ego-expression, at least to me — that I couldn't turn from it to anything else. It seemed like a farewell piece.

But the piano piece nagged at me: it had its own right to existence, whether or not I wanted to associate with it. So I kept at it, getting it out from time to time, printing it out, shoving notes around, carving it up and pinning it down. I thought it had been finished in Portland two years ago, and I ran it through the synthesizer and put it on my iPod and listened to it a lot. But I knew I hadn't really come to terms with it.

Now, though, it's finished. I've been through it a final time, sprinkling the dynamics indications in, adjusting peculiarities of notation, trying to make the damn thing playable. It's a very strange piece, an hour long, eventful I think but not insistent. Like the slow movements of the Trio, it's music as landscape. For a long time western european music, the kind of music I deal with, was either song or dance, "lyric or choric," in Virgil Thomson's schema; the Romantic era added to this what he called, unfortunately, I think, 'spasmic," music whose human-body source of energy was not in the larynx or the feet but somewhere between.

The Twentieth Century found a fourth way, dissociating the musical process from those of the human body. My own music tends toward landscape, I think, though I could be wrong. There's a program to this long piano sonata — I've decided to call it my second Sonata; it's in three movements, so that qualifies it — but the program doesn't have to be revealed. It's pretty abstract, this piece. I hope it finds a performance.

Hooray! It's finished!
Posted by Charles Shere at 11:09 PM

Is there any kind of recording? Even a MIDI realization would interest me. Speaking of which I think you should add to your list of needs of the music community much better access to recordings. It can be years before a contemporary piece premiered even by a major orchestra is available in any sort of recorded medium. (Even if the composer is, say, John Adams — let alone someone writing outside stuff.)

Nice of you to ask. Yes; I've asked Mr. Macintosh to come up with a synthetic performance. It's a little, well, synthetic, but it gives you an idea. One is on its way to you tomorrow (Feb. 19).