I AM NOT WRITING the blog I want to write: a report on the three nights of performances by the Merce Cunningham Dance Company we saw last week in Berkeley. That blog is well begun, but needs more time.

In the meantime, I am listening to the first act of Philip Glass's opera Orphée. The CDs arrived the other day, but I haven't had a chance to put them on. And sliding the CD into the Mac — for I have no other functioning CD player these days — I look at my desktop photo once again, a photo I took last May in Siracusa, during a holiday in Sicily. 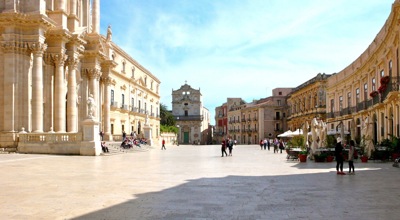 The photo always looks just a little odd to me, because I know it has been altered. The original was has been skewed, using the open-source software Gimp, to correct for the faulty perspective caused by low camera angle. In the original the walls left and right leaned away from the center as they went up. You can best see the inadequacy of the technique by looking at the fifth column from the left, the one whose rectangular base is clearly evident: it bows a bit, halfway up, to the right.

I look on the hard drive in vain for the original photo: I must not have saved it. It's permanently altered — a phrase whose absurdity is difficult to deal with. But then I remember a discussion I had with a fellow in a photography shop years ago in Berkeley, when I asked him something about Lindsey's photos, made with the then-new ”panorama“ option on her very early-generation digital Elph camera. ”They're just cropped that way,“ he said, ”they're not really panoramas, it's an optical illusion.“

That photo up there — perhaps because of the artificial skewing, it looks like a stage-set: forced perspective. I think too of certain Vermeer paintings, but that may be not so much because of perspective as because of the stillness: the few people, arrested in the action of motion; the hard edges of the stucco walls against the softer sky; the empty expanse of pavement.

The photo strikes my eyes, and through them my mind, much the way the CD strikes my ears, and through them my mind. There's something so vulnerably and pathetically two-dimensional about all this, when we all know Orpheus and Sicily are four-dimensional at the least. Width, height, depth, time: and then the extensions of those four dimensions: Embrace, Aspiration, Resonance, and Change. The photo recalls the experience to me, of course; I feel again the sun, the moving air, the hunger and thirst, the gratitude at simply being there: impressions no one else can have save perhaps Lindsey, who was at my side at the time.

Perhaps the cast of this Portland Opera recording of Orphée can have a similar rush of recollection when listening to these CDs. I hope so. They worked very hard, and did a fine job. But a recording is not an opera, as a photograph is not a city. Something has been skewed. Perhaps it is only the skews that remain, that ”mean“ anything; perhaps these skews are what Epicurus had in mind when proposing his clinamen.
Posted by Charles Shere at 10:04 PM

Cameras have fixed lenses, whereas ours (human ones) are "adjustable." for near or far focus. Stepping down a lens concentrates the rays towards the center of the focal point, increasing acuity and "correcting" for depth of field. Glass lenses really do report what they're seeing. It's our brains that "correct" for perspective shift when looking "up" (or down) at something not on level with our field (position) of view. If you look "up" at the buildings in a city, your brain is sorting out the distortion and "filling in" distorted parts with replacements. Your brain has "learned" to correct the distortions for the parts of the field of vision which are not being focused on. Try crossing your eyes and looking up at a corner on the ceiling of the room you're in. The perspective will "tilt" because you've sent the brain information it's not trained to sort out--so it "sees" the distortion it ordinarily doesn't "recognize".

Imagine what it would be like to live in the literal reality our eyes see. Maybe then we'd be a little like the "contrary" Indian in Little Big Man, who did everything backwards or in reverse order.

Looking through a glass lens allows you to "survey" the field of a projected scene, something you can't do through your own eyes, which can only focus on one part of the scene at a time. Peripheral vision only allows a kind of second-hand recognition of data outside the focal point. That's why you can "see" the distortion which occurs in fixed artificial lenses. Wide angle lenses report a wide range, at the cost of "normal" depth of field. Long lenses bring everything closer, distorting through magnification. Normal lenses mimic the "real" depth of field our eyes think they see. But what is "normal"? Horses and dragonflies "see" an entirely different view of reality. Compound eyes--do we even know how insect brains process their visual data?

Thanks for a perceptive comment (as you so often provide). It's interesting to me that we are so scientific and materialist, these days, and so little humanistic, that we — you and I, and who knows how many who may read this — feel it necessary to use so many quote marks. We think we don't really see, we only "see," our poor brains processing (however brilliantly) the very real electric impulses fed them by our upside-down-seeing eyes.

Reality is what we make of it. So is distortion. What I delighted on meditating on, here, was the sudden concatenation of Epicurus's clinamen and the odd skew of the camera lens — which, inanimate, enjoys neither discrimination nor reason.

A photograph is a shadow. We all know how to "read" — oh dear, now I'm using scare quotes — shadows, however much the may "distort" the shapes of the real, physical bodies that dare to come between them and the sun.

Not going to be nearly so intellectual. I thought about this yesterday when reading your comments. Your comments made me consider what skewing is -- and I think it is the difference between being in the moment versus memory either captured artificially or internally- depending on how we take it in, and as is inevitable, immediately in the past.
I get this most clearly in dreams. Secondly whenever I make my feeble attempts to capture landscapes/colors on camera - usually the Montana Rockies. At any rate I enjoyed thinking about this, and I do think you like the machine/technological aspect to all of this as well.

Interesting. I have the same caution about overuse of quotation marks, but when anticipating how a reader may respond to my written speech, I try to show irony or "separation" so that I'm not taken so literally.

When I first began posting on blogs, my comments were often misinterpreted because I couldn't inflect though aural or visual cues. The new generation of texting and so forth has its own peculiar abbreviated forms of exchange.

Quotation marks are also used (by me) to indicate double meanings.

I sometimes think a lot of what Wittgenstein tells us about language could be summarized by simply putting quotation marks around every word, thereby signifying our advanced awareness of the artificiality of every linguistic function.

Alice Notley published a small group of prosepoems composed of words and phrases, all of which were bracketed with quotation marks. I found it unreadable for its redundancy. Perhaps my own writing tends towards that redundancy. Perhaps I should quote less, and take more responsibility for my words.