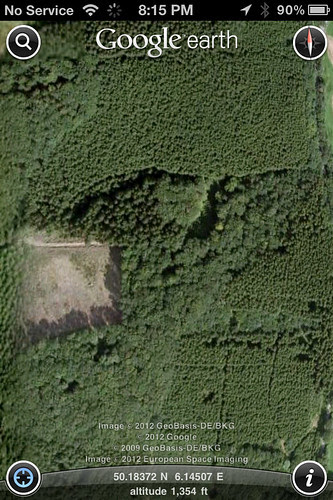 From Google Earth: the forest in which we were lost today

WE CHEATED A BIT yesterday — you see Curtis, we're not all that obsessed — and we paid for it today. The problem is, overnight accommodations along this stretch of the GR5 are few and far between; you have to plan carefully. Yesterday the shortest walk between our two endpoints would have been a good twenty-five kilometers, over our budget. So we cut nine kilometers by taking a taxi to bypass the first stage. At nine-thirty he was at our Vielsalm hotel, smiling and ready to go; we tossed the backpacks into the trunk and set off.

The ride took twenty minutes or so, partly because our taxiste was in no hurry. He pointed out sights along the way, telling us more about the incredibly evolved techniques for harvesting pulpwood, the mainstay of the local economy: giant robots, guided by remote control, climbing the hillside to clear-cut huge tracts, strip the branches, cut the trees into two-meter lengths, and stack them to be picked up after they've seasoned a bit.

We were curious about hunting. Deer, pigs, and wild goats are taken in November and December, but the trails are safe for us now; hunting is out of season pour la réproduction. The country we've been walking through seems very forest-oriented, particularly at table: venison, boar, and wild duck are often on the menus; forest berries accompany them, and flavor the spirits you take as a digestive, or to warm you on cold evenings.

Taxiste dropped us in Commanster, a pretty little town with a fine stone church, two or three houses, and the memory of an unsolved murder. In November 1955 Arsène Lecope, a man in his fifties who lived with his two spinster sisters on their small farm near the church, was set upon near the cemetery by a large man wearing a black hood as he was returning from his habitual Monday evening smoker with the other old boys in the neighborhood.

He was strangled, but managed to beat off the assailant and drag himself to the nearest house. The doctor was summoned and reassured everyone that the victim's condition was not serious. He worsened, though, and died a few days later. This precipitated a police investigation, but the locals were apparently not very cooperative, and the case was never solved. I don't know much about World War II, but know of course the fighting was long and heavy hereabouts; I wouldn't be surprised if a long-simmering resentment concerning resistance or complicity were at the bottom of the case.

The fields around Commanster are beautiful today; it's hard to think how much blood has sunk into them over the years. We walked through them, through patches of forest, through more fields; through the ghost embankment of the old railroad, long since disappeared otherwise, through the villages of Braunlauf and Schirm, always hopeful for a café, always disappointed.We left the GR5 after Schirm and walked down past another imposing farmstead into Grüfflingen, meeting the first human we'd seen since the taxiste, a pretty girl in her 'teens with a border collie at her heels. Bonjour, excusez-moi, est-ce qu'il y a un café dans la village? She looked a little surprised and amused and answered in excellent English, Oh no, no, I'm sorry…

Pourquoi parlez-vous anglais? Nosy me asked next. The answer came pertly, woth a light little laugh: Because I can! And on up the road she and her collie went.And we continued on ours, through more forest and fields, past a bunker and a huge agricultural operation, down into Burg-Reuland and our night's hotel.

It had been an easy day, fifteen kilometers, not much climbing, but we were a little footsore. Still, after cleaning up and changing we went for a stroll around town. The ruins of a fine old fort, burned by the French in the 1790s. A fine city house painted a striking deep red. Houses with small orchards, chickenyards, dogs. From a barn next one of these village houses, the bleating of a hungry calf.

Today, though, ah, today was difficult. The climb up out of Reuland was one of the steepest I've walked, and soon after we'd leveled out and were enjoying a walk down a country road between fields we somehow missed a turn. I don't know how it happened; I think the balissage was missing, and I wasn't sufficiently attentive. The guidebook and its map both clearly show a right turn at a crossroads, but we came to none.

Finally we came to a mud road leading off to the right, and there stood a huge oak with the only blaze we'd seen in quite a while: the X-shaped cross of red and white stripes that say Go No Further.So we took the mud road. No more balissage. Back to the country road and ignore the X. That way clearly is wrong, map and compass tell me: back to the mud. We follow this until we come to the forest; we enter the forest; we get completely lost. There'd been a heavy mist or very light rain all this time; even in the open it was hard to orient yourself by the light; in the woods I wasn't sure we could count on our GPS.

Still, I trusted the compass. The right way was far too steep a descent in this terrain, badgerholes, fallen branches, leaves, our heavy packs: we went along the contour and even a little uphill. Finally we came to the clearing and I saw what must be the trail. A hundred meters down a grassy slope and we were on a dirt road; almost immediately we saw the welcome balissage: white stripe over red. From there it was a piece of cake, or nearly.

We met our first co-walkers of the last four days, and they gave us both advice and a better map. We took a steep climb up to the edge of Luxembourg, then — following our new map — left the GR5 and walked a kilometer or so down an asphalt country road (rarely a car or tractor to be seen) into town. There, in front of us, our hotel, with its reassuring sign PANNEKOEKENHUIS; and there we are tonight — and, for all I know, tomorrow night too, as it may snow tomorrow. We've walked four days now, about sixty kilometers (thirty-eight miles), not bad, given the terrain.

Posted by Charles Shere at 1:16 PM