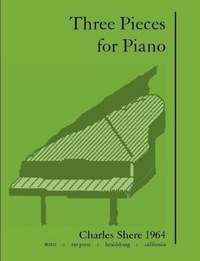 ENDLESS, THE TYPOGRAPHICAL errors that creep into a job of musical typesetting. I wrote these three little pieces nearly fifty years ago, using a Rapidograph pen, an Ames lettering angle, and India ink — FW was the brand, as I recall — at the drafting table my father-in-law had kindly donated to my studio, which in those days was the basement of a small apartment on Berkeley's Francisco Street. (That studio soon turned into a combined bedroom-playroom for our three kids, and I moved shop into what was originally meant to be a breakfast nook.) 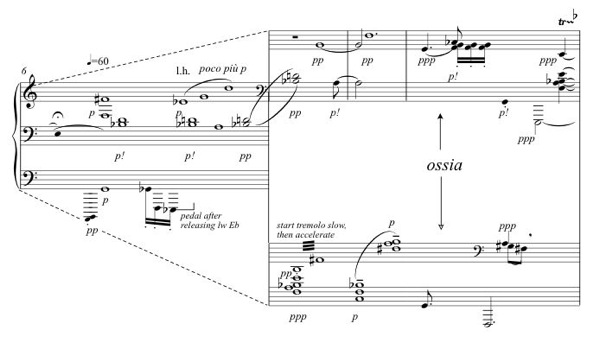 As you see, the piece is fairly screaming for typographical errors. The two barlines inside the top system, for example, should probably be invisible. OMG, there's another typo: "low" has lost its vowel in the italicized pedalling instruction in the first measure. But you know what? Good enough is the enemy of perfect, and this is good enough for me, at least for the present. I'll fix these in the master file, but our Internet connection is too slow and unreliable today for me to re-upload the file and then deal with Lulu.com to replace the one now in press.

Here's the thing: these Three Pieces are the earliest things of mine that I still like to hear, not that I ever do — they waited until 1993 for their premiere, by the late Rae Imamura (who played them, interestingly, in Kirnberger Three rather than in equal temperament); and they haven't been heard since. I don't go out of my way to court performances.

You can read more about the pieces on my website, and you can hear a somewhat tweaked synthesization of the first minute of the Three Pieces here. If you decide you'd like to play them, why you can order the sheet music, just by clicking on that green cover up there at the upper left. Please do: you will make me very happy.
Posted by Charles Shere at 6:22 PM

In 1973-4, we lived in an apartment building I was managing at 2021 Francisco (also the building across the street). Goodwin Sammel lived next door, and whenever he heard me playing Bartok, he would linger out on the sidewalk to appraise my rendition.

I don't think I could play this piece, even if I had the skill, since it's in a style I don't follow. Back in my undergraduate days, I used to browse an academic periodical which featured erudite articles on the "new music" trends. In those days, it was believed (I assume, in the universities) that atonal music was the only genre worth pursuing, and anything else had become passé. Thank goodness those days are long gone.

Lately I've been trying to finish a piece I suppose might be tentatively entitled Elegiac Fanfare for the American Dead of Afghanistan--a piece altogether too influenced by Aaron Copland. Not sure whether to put the theme in the brass section or the strings. All this is of course idle, since I don't know the exact ranges of instruments (except for the piano).

I think you once stated somewhere that you were at least as intrigued by how musical notation looked, as by how it sounded. I'm sure I must have mentioned Frederic Sommer's abstract musical "drawings" once here, which seem relevant.

Our Francisco memories are overshadowed by dark events of those years--our son's diagnoses at age four of juvenile diabetes, my stepfather's death in an automobile crash in Montana. My unsuccessful attempt to become a poet.

Serendipity was just around the corner, next door to what is now Corso Restaurant. This was all before Shattuck went "ghetto" and "gentry" and upscale. How sterile it now seems, with those "Constructivist" high-rises and lazy liriodendrons.

By the way, is Fanny's ever going to reopen?

Well, you know how it is, you can''t go home again. I remember visiting my sixth-grade friend Larry Rinne, who lived at the top of Francisco Street back in the late 1940s; it was in his back yard I saw/heard my first jet-propelled airplane. Later, Alice Waters taught in the Montessori school there; she and David Goines lived down at Francisco and Grove. (Lindsey and I lived at 1947 Francisco from about 1962 until 1973; perhaps we saw you now and then on the street.)

Goodwin Sammel: what a splendid fellow, marvelous musician, enthusiastic gourmet. I miss him.

As to the music: I wonder what Bartok you were playing at: I can't think of any atonal Bartok. The war between serial (not "atonal") and neoclassical styles was long and at times bitter; one of its worst accomplishments was the consequent near-total exclusion from the American intellectual scene of a third alternative, to my mind the most interesting, the music of the New York school: Cage, Wolff, Feldman, Brown.

A new bar-café, curiously called Bartavelle, has been announced for the old Café Fanny space; you can read about it here. That's all I know.

Was googling and came upon this and thought you might like to know that Goodwin Samuel died yesterday at 94. He was indeed a splendid fellow and great Francisco Street neighbor.