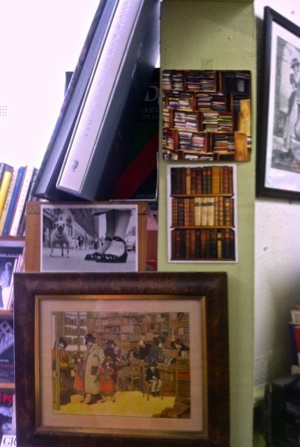 Eastside Road, November 21, 2012—
I AM NOT READING enough these days; no question about it. It's mostly because I have been writing and traveling. Both occupations require more energy than they used to, both physical and mental energy; and lately both occupations have also more busily filled those parts of the mind that seem increasingly necessarily at rest, or at least relatively untroubled, if I'm to attend to reading.

Like too many of us I typically read a few minutes at bedtime, when one's least likely to profit from it. Bedtime reading is an exercise in winding down. I'm tempted, in fact, to liken it to end of life, a time for relinquishing mental and physical exercise in preparation for the long sleep. Lately I've adopted the habit of reading in a foreign language at bedtime, and reading without a dictionary. I don't care if I don't fully understand the material; I'm reading for a different purpose. That's an injustice to the book and its author, of course, but I can always return to it with attentions more fully awake, perhaps in translation. Currently I'm reading a biography of one of my childhood favorite authors, Hendrik Willem van Loon. I've learned a few things from it, and one of these days I may even report on them here. But that's not today's purpose.

Instead, let me report on a book read last week, half of it on the flight from Melbourne to Los Angeles. Reading on airplanes, for me, is akin to reading in bed: I tend to forget completely what I've read as soon as the plane has landed. Sometimes, as soon as I've turned a page or two. Not this time, though, partly because I'd begun the book — at bedtime — a day or two before.

I found the book, Laurens van der Post's Venture to the Interior, at Yarra Cottage Books, a small promising used-book shop in Warrandyte, a bucolic suburb of Melbourne on the banks of the Yarra River. A trail runs along the bank there, several miles long. In mid-spring the trees are in full foliage, eucalypts, oaks, Monterey pines, shading the decomposed granite sandy path. The countryside here is so pretty it's been the subject of a number of landscape painters: at one point a stele commemorates one of them, Clara Southern, with a reproduction of one of her paintings.

Clara Southern, or 'Panther' as she was known, was described as a tall lithe beauty, with reddish fair hair. In 1905, she married local miner, John Arthur Flinn and settled at 'Blythe Bank', North Warrandyte on The Hill' above the Warrandyte township.
This work was painted from the high vantage point of 'The Hill', and depicts a number of the buildings along Yarra Street, including on the far left, the old bakery, which is still operational today. The view is westward across the Yarra River towards the hills of Templestowe.

That bakery — you'll have to take my word for it; my photo of the painting, reproduced in enameled steel or aluminum on the stele, and suffering from lens flare here — is to the left of the two sharply pitched shed roofs, which mark the location of Yarra Cottage Books.

The shop reminded me of those of fifty years ago, a series of small rooms with crowded shelves, well enough organized but better suited to browsing than go-and-get shopping (except that my age and size make the necessary floor-crouching difficult between close-set bookshelves). I looked for a copy of something by Patrick Leigh Fermor to give to my brother, who's done his share of global wandering, but found only the new biography, which I must hasten to obtain. (It was far too large to carry on the airplane). What I did find was Venture to the Interior, in a dog-eared Penguin paperbound that must be thirty years old.

What a book! The country it describes is a long way from the green Yarra valley in Victoria, as the "Interior" of the title is Nyasaland, in central Africa. And the "venture" — whose exact purpose is a little mysterious (causing me to wonder at times just who van der Post may have actually been venturing for) — involved flights very different from mine. I have made one long flight on a propellor-driven passenger airplane, from Bucharest to Moscow thirty years ago, and I know the wallow and the drone: but the flight van der Post describes, through Sahara sandstorms in the late 1940s, was a very different matter. Reading about it made today's flights seem comfortable, even though the food and drinks are considerably more Spartan.

At the bookshop the first sentence to catch my eye sold me the book:

One of the most striking features of the desperate age in which we live is its genius for finding good reasons for doing bad things.

Fourteen or fifteen times, in the course of reading these two hundred pages, I found myself ticking off paragraphs in the margins. Van der Post is writing about the end of colonialism, the tension between the "races," the recovery from the brutalities of World War II, the difference between the sexes; about revenge and forgiveness, the nature of Time, the fugitive transactionality of morality, the melancholia resulting from "education."

And yet there is a way of knowing which is at once underneath and above consciousness of knowing. There is a way in which the collective knowledge of mankind expresses itself, for the finite individual, through mere daily living: a way in which life itself is sheer knowing. So life is to me, anyway; a mystery in all its essentials, a complete and utter mystery. I accept it even gladly as such because the acceptance keeps me humble, keeps me in my little place; prevents me, as we used to say in the recent war, from being caught too far out of position.

Venture to the Interior is narrative and suspense narrative; it is travel and historical travel; it is psychology and social philosophy. It seems to me to be imperative reading for our time, for the age of Taliban and American Exceptionalism, as it was the product of its time, the age of fascism and the Third Reich. What a rich and confounding world this is, that offers such collective organized dismay, in the embrace of such transcendent natural beauty!