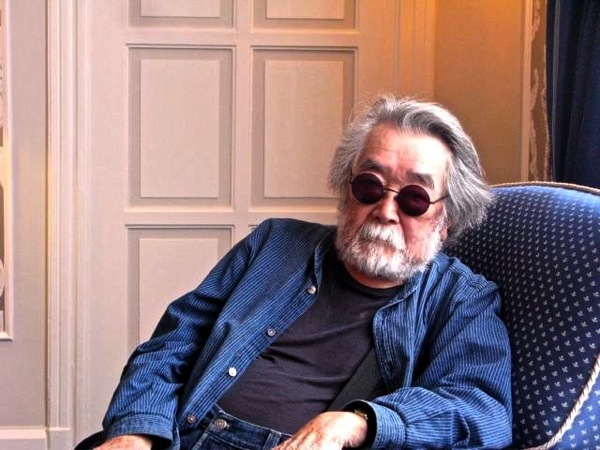 TWO YEARS AGO or so I wrote briefly here about the painter and printmaker Kenjilo Nanao, whose studio I had visited that day, to get to know him and his paintings better, since he had asked me to write an essay for the catalog that would accompany the retrospective exhibition at the University of Santa Clara that September.

We hit it off immediately, Lindsey and I, Kenji and Gail. We didn't get together often, but we had dinner in their home — Kenji cooked at table, memorably — and again at Chez Panisse. Gail is an intelligent, deeply sympathetic woman; Kenji was a force of Nature. A samurai, as Gail says, big, bearlike, lusty, tender. Like all good painters, he sees things privately, attaching importance and poetic meaning to things you and I simply look at.

I cobbled together the essay quickly enough — there wasn't a lot of time — drawing on my memories of paintings I'd seen over the years. I had always cherished one particular painting of his, which I'd made a little sketch of in my journal when I first saw it in a San Francisco gallery. It seemed to me to be an ideal mediation of landscape and abstraction. It was almost entirely in white, and projected a kind of tranquility I associate otherwise, in works of art, only with the music of John Cage and Morton Feldman.

I reprinted the essay in my book The Idea of Permanence; it is not available, I think, on the Internet. I quote here only the final paragraph:

Comely and appropriate, searching and explorative, rooted in childhood, in youth, in maturity; traveling through time and space, tracking life energy to its most universal source, these paintings stand I think astride the Pacific, one foot in Japan, one in California, aware of the beauties and triumphs of the long history of the arts from Ancient Greece to the present, celebrating yet regretting our transient energies, always presenting, containing, suggesting the essential optimism of contemplation. There is nothing more beautiful, in all its generous modesty, than this mastery.

Kenji died on Monday. He'd been in hospital ten or twelve days, after a series of strokes culminating in cerebral hemorrhage. Gail e-mailed me quickly, asking me to write an obituary, which I set here:

Kenjilo Nanao, whose serene, lyrical paintings assimilated the sensibilities of his native Japan and his adopted California through a long and distinguished career, died in Berkeley on May 13, at the age of 84, of a cerebral hemorrhage.

Born July 26, 1929, in Aomori, in the far north of Honshu, over four hundred miles north of Tokyo — “the Oklahoma of Japan,” Nanao used to say — he arrived in San Francisco in 1960. He had wanted to study painting in France, but had trouble learning French. He became instead a Bay Area painter, influenced by the lyrical abstraction of Richard Diebenkorn and his own friend and teacher Nathan Oliveira.

He was an influential and greatly loved teacher who contributed greatly to the growing reputation of California State University in Hayward, where he was considered a "consummate professional," Ramos says, adding "It was difficult to be an innovative Abstract Expressionist after the 1960s, but Kenji managed to dispel that myth by making wonderfully fresh paintings."

An inveterate traveler, Nanao was particularly drawn to Venice, Turkey, and his native Honshu. His work drew on these travels, on the light and space they revealed to him, and on the paintings he was able to study at first hand by such favorites as Cezanne and Titian; but it also speaks of transience and objectiviity, resolving the vulnerability of human life in the contemplation of the immaterial.

Nanao loved sweet things, colors, jokes, cooking, poker, and his family. His grandchildren adored him. He leaves, beside the fond memories of hundreds of students and friends and the beauty of his many prints and paintings, his devoted wife Gail, his son Max and daughter-in-law Chloe, and their children Zoe and Alexander.

I will miss him, but as I get older I seem to get more accustomed to these disasters. In a curious way Death draws us closer together. Some of us: those who have departed after affecting us deeply, deeply enough to have left a part of them behind in our hearts. Like Cage, Kenji affected me with his silence and his vision, his tender passion for life and his awareness of its limits and his dedication to the reconciliation that awareness demands of us. The essential optimism of contemplation.

There's a touching farewell to Kenji by Deborah Barlow on her blog Slow Muse, with a wonderful photo of him taken in his studio only a couple of weeks ago. And here's another, which I took on that studio visit nearly two years ago… 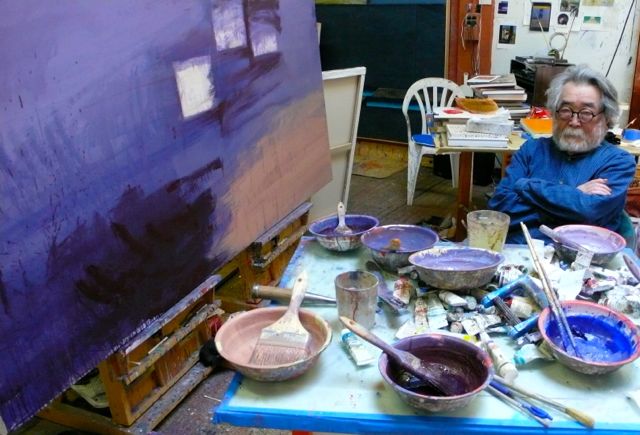