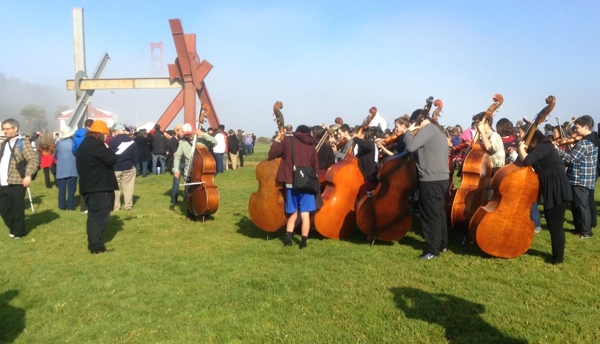 LAST SATURDAY WE HEARD Lisa Bielawa’s Crissy Broadcast, the San Francisco variant of a piece she wrote for performance at Berlin’s old Tempelhof Airfield last May. Crissy Field, on the north shore of the Presidio, is a retired airstrip, like Tempelhof, but considerably smaller, and grass instead of tarmac, and it would have been fascinating to have been able to compare the performances, but budgets are small around here, and I’m no longer paid to cover such events. (Nor have I ever been to Berlin; nor do I want to go there.)

Bielawa chose the title [Airfield] Broadcast for its allusion not to radio or television but to the sowing of seed, as it is broadcast — strewn broadly and evenly — across a field, whether from machine or hand. (I remember with pleasure striding across the plowed and harrowed damp field, a bucket in my left hand, dipping my right hand into the grain, then strewing it, palm up, grain flying out between index finger and thumb. There are so many subtle controls in that hand, affecting the amount and pattern of the distribution, and what a blend of sight, smell, touch, even sound…)

The San Francisco installation was (as I understand it; I've done no real research) produced with the collusion of the San Francisco Contemporary Music Players and other — perhaps many other — ensembles. The first person I met when we arrived on the scene, a little before ten o'clock, was Roy Malan, the principal violinist with the SFCMP. He was there leading a sizable contingent of musicians from I forget what high school; and it turned out many SFCMP stalwarts were doing the same. 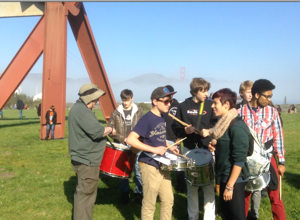 There was Willie Winant, for example, leading musicians from St. Mary's, including a snare drummer who turned out to be the son of acquaintances of ours, with whom we lunched after the performance. A little later I ran across Peter Josheff, clarinetist with the contemporary ensemble Earplay.

The various ensembles ranged from small rather cohesive groups, like Winant's percussion ensemble, to full orchestras like Malan's. Toward the end of the hour I came upon an a capella chorus. In Berlin there were apparently even pianos, hauled around on motorized luggage carriers; but I saw no pianos, or harps or pipe organs or kettledrums, at Crissy Field: the grass worked well enough for lightweight biplanes at the time of World War One, but I doubt it would stand up to Steinways.

When I ran into Roy he was fiddling with an improvised lyre he'd mounted at the scroll end of his violin — tape of some sort holding a clothespin. As a band musician in my youth I remember all our wind instruments were fitted with such things. Only the flutists, their instruments sticking out sideways from the face, had to invest in special equipment: an armband with a couple of buckles to tighten it over the left forearm carried the lyre. We played from little sheets of music hardly bigger than a file card, but of course we were only playing Sousa marches or the like, with lots of repeat signs in them. 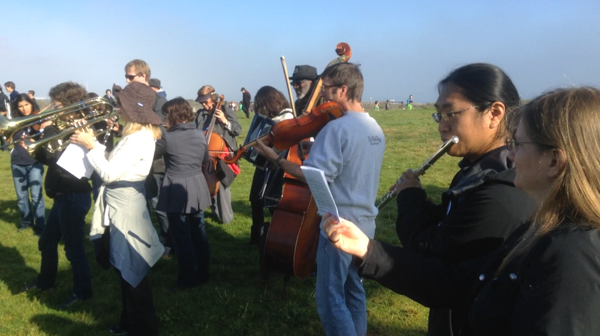 Here at Crissy Field the flute players had helpers, as you see here at the right of the photo; or in some rather endearing cases they played from parts that had been taped to the backs of musicians standing in front of them.

The parts, and the evidence that came to my ears, suggested that Crissy Broadcast is composed of a number of musical cells, short structural units, which are repeated a variable number of times, and are separated by silences apparently measured by the clock. I saw a number of leaders consulting wrist-watches, then signaling their ensembles before beginning to conduct.

I was told that the spatial distribution, which at first seemed set up more or less imprecisely but evidently according to a preconceived plan, was then affected by scored instructions for the musicians to walk a given number of paces, in a given direction.

Like many others in the audience I was so intent on photographing, maintaining silence, and enjoying the sounds and the atmosphere, that I found it impossible to observe the entire effect as a unit. If I were more disciplined I'd have gone to the composer's discussion of the event, after that morning performance, and then to the repeat performance in the late afternoon: but other pleasures interfered.

What did Crissy Broadcast sound like? To me, perhaps influenced by knowing of its German origin, it sounded a little Germanic. The preponderance of wind instruments (since after all string instruments don't make sounds that carry nearly as well out of doors) and percussion, and the repeated short "melodicles," as Lou Harrison calls these tunelets, brought to mind, for whatever reason, the music Kurt Weill provided for Bertolt Brecht's plays. Maybe Hindemith's gebrauchmusik is in the mix, too.

I also thought of Douglas Leedy's Exhibition Music, composed in 1965 for a backyard reception for, as I recall, people connected somehow with the twentieth anniversary of the founding of the United Nations. (You can hear Exhibition Music streaming online.) Leedy was writing in the spirit of Erik Satie's musique d'ameublement (furniture music), the first of which, composed in 1917, was in fact intended to be performed pour l'arrivée des invités (grande réception) - À jouer dans un vestibule (for the arrival of the guests (grand reception) - to be played in a vestibule).

But Bielawa's score is not in that spirit, I think. She, or someone writing for her on the website publicizing the event, refers to the work as "a massive, spatialized symphony involving more than 800 professional, student and amateur musicians, including orchestras, bands, and experimental new music groups," and that description brings to mind Charles Ives's Universe Symphony worked on from 1911 or so to 1928, when Ives stopped composing. I'm not sure I'd attach the word "symphony" to what I heard at Crissy Field on Saturday; to me the word suggests something both more determined as composition and more resolved in performance.

(I realize that etymologically the word simply means "sounds together," and there certainly were many sounds sounding simultaneously; but the word has accumulated some linguistic meaning, and it always seems unfortunate when words are dulled, deliberately or not.)

Instead, Crissy Broadcast seems to me to fall into a different category, if indeed there are enough such pieces to form a category: it is landscape music. Not background music to cover awkward pauses (or generalized chatter) in a social context, but music meant to accompany the theater that is landscape when it is observed or experienced for esthetic purpose.

One of the most pleasant aspects of Crissy Field is its generosity in admitting ambient sounds, and the San Francisco location was generous in providing them: occasional fog horns; the sound of the elevated highway that formed its southern backdrop; the lapping of the bay on the beach, if you were close enough and attentive enough to hear it. And, of course, occasional muted talk, though the audience seemed to me to be unexpectedly quiet and respectful. And, once or twice, a dog, barking in the distance.

The weather was glorious: a thin fog was lifting throughout the performance, veiling the magnificent Golden Gate Bridge, as if it were politely retiring in order to allow Mark di Suvero center stage, through the dozen or so marvelous huge steel sculptures of his currently installed at Crissy Field. I'm told that Saturday afternoon was cooler and windier, and Sunday noon downright cold and miserable. I'm glad we went when we did.

I made an eight-minute video, strolling among the musicians, shortly after they began playing. You can see it here; and searching YouTube for "Crissy Broadcast" will turn up clips others have sent in as well.
Posted by Charles Shere at 9:49 PM