Eastside Road, November 8, 2013—
I PROMISED NOT to write this month, I know, but I'd be remiss not to mention two Bay Area events worth considering. 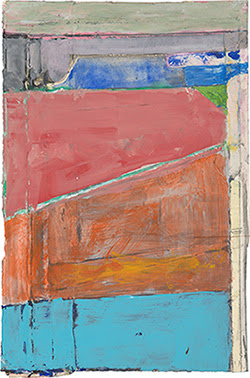 The College of Marin is showing a beautifully installed little exhibition of a number of works on paper by Richard Diebenkorn, many of them previously not exhibited publicly: gouaches, drawings, and collages both abstract and figurative, mostly from the late 1950s and early 1960s but a few from later in his life. The work is absorbing, of course, and the gallery invites comfortable, relaxed, sustained viewing: plenty of natural light, room to step back, see several pieces at once, or step in for very close examination. I can't recommend this show highly enough.


• College of Marin Fine Arts Gallery,
835 College Avenue, Kentfield, California
September 30 – November 14, 2013
Gallery Hours: Monday through Friday, 10 a.m. to 5 p.m. and Thursdays, 10 a.m. to 8 p.m.LAST NIGHT WE HEARD the Del Sol String Quartet play Robert Erickson's last quartet, Corfu, an expansive, eventful, ultimately very serene single-movement piece full of drones and hockets, Arabic melisma, Mahlerish introspection, and Erickson's own unique immersion in sounds. The quartet then discussed their view of the music, what it "means" to them and how they approach its performance; and they asked members of the audience to participate in the discussion.

Also participating was the artist Kimetha Vanderveen, who showed a number of small panels painted in deeply glowing pastel colors whose surfaces were rubbed and layered, investing them with a contemplative energy inspired, as she told us, by Erickson's music.

And then the Del Sol generously repeated their performance of Corfu, finding even more energy, more serenity in the work. Erickson would have been pleased with this performance, I know.

This was at the Center for New Music, a casual storefront room with good acoustics right downtown in San Francisco (and close to a good casual eatery, Show Dogs). Best of all, though: the Del Sol is preparing all four of Erickson's quartets for recording, and will present all four in concert in Berkeley's Hillside Club in a couple of weeks. I can vouch for the considerable commitment they have to the music, the care with which they're preparing it, and the skill and musicality of their performance, and I wouldn't miss this concert. Beware the webpage linked here, which contains some misleading dates and misleadingly presented information: the correct location and dates are: