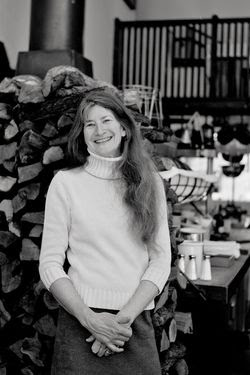 WE HAVE LOST another major presence — in our extended family, in our profession, in our community. Judy Rodgers, who was always so focussed, intelligent, committed, and fine in every way, died yesterday, only 57 years old, after a particularly nasty year dealing with a late-discovered cancer.

Judy was the age of our oldest daughter, and she lived a couple of years with her; she came young to "our" restaurant; she lived in our house one summer while we were away; she traveled a few weeks with us another summer, when we took lodgings together for a couple of hot weeks in Firenze.

I have always loved her, though we saw little of her after our move to the country. I've always thought of her as a honorary daughter and a friend. Now of course I regret the missed opportunities to spend more time with her: but like most restaurateurs who happen to have families she was either at work or at home, and we didn't like to distract her at work, or intrude on precious time with her family.

Judy somehow managed to merge or mediate France and Missouri, Stanford and Berkeley. Here's what I mean: she was born in St. Louis Missouri into a family not particularly interested in food. She spent a year as an exchange student in Roanne where she happened to be placed in the home of Jean Troisgros, one of the great three-star chefs in France, co-proprietor of Les Frères Troisgros in Roanne.

She majored in art history at Stanford, but hung out at Chez Panisse in Berkeley. Alice Waters recognized her gifts and her skills quickly and put her in charge of lunches there.

She spent a few weeks in our house on Curtis Street, while we were in France and Italy; there she read virtually all our cookbooks, cover to cover.

In my mind's eye I see a photo Lindsey took in Chiomonte, the Italian Alpine village her father was born in: she's standing in the road, gesturing exuberantly to Lindsey's distant cousin Ernesto and Rosa.

I see her on the staircase in our Pensione Orchidea in Firenze, flaming red hair, very short miniskirt, color everywhere. She and Lindsey had been spending another day in museums and galleries. (I'd been at my desk.)

I see her in the house she and Peter shared with Thérèse and Eric: one or two of our overflow prints or posters are on the walls, but the most striking decor is the dozens of pairs of shoes, hanging by their high heels from the picture molding around the tops of the walls in the living and dining rooms.

She was tall and lanky, lanternjawed, beautiful in a Katherine Hepburny way. She introduced us to Dan McCleary, whose huge painting of a menacing wolf hung for years in her Zuni Café. She knew books, paintings, cooks and cooking.

I remember the Crawfish Dinner she put on at the Union Hotel in Benicia: as we pulled up to park I saw an escapee scuttling down the sidewalk toward the bay. Let him go, Judy said, He's earned a reprieve.

I remember the street dinner she arranged outside Zuni. We ate at temporary tables on the alley on a balmy night, and a soprano sang opera arias from a window in the second story.

I remember the duck dinners at Zuni, repeating things she'd learned from her mentor Pepette Arbulo in her restaurant in the Landes. She used all of the duck, and duck went into all of the meal, which ended with merveilles, pastries fried in duck fat. (On the last day of the duck marathon, when nearly everything had been eaten, we feasted on roasted duck bones. Delicious.)

Judy was what we used to call, in days more innocent of correctness, a man's woman: a woman who was anyone's equal, who knew that her place in the world was precisely wherever the hell she wanted it to be. I think of her and Catherine Brandel and Marion Cunningham and Barbara Tropp, gone all of them now; it would be nice to think they're at a case of Champagne in a very special Elysian Fields.

There are a lot of touching tributes to Judy online at the moment: here and here and very usefully here, where I found the photo I've used here, and where another shows her in front of the oven Eric built for her at Zuni.

I particularly like David Lebovitz's tribute here. He mentions celery and anchovies as an example of the specificity of her work; and he recalls her clogs and her cotton skirt billowing out as she turns quickly to face her kitchen. She was always both deft and certain, her hair and skirts always seemed airy and light-hearted yet her address to work or conversation or friendship seemed always direct and crisp and right on target. She was graceful though lanky. She was demanding and perfectionist and suffered no fools, but loyal and generous with her friendship.

She was a magnificent woman, dedicated to la nourriture, scholarly and practical, zesty and forthright.

Her best memorial will probably always be her superb book, The Zuni Café Cookbook (New York: W.W. Norton & Company, 2002). When we brought our copy home I immediately made her Caesar salad from it, and the result tasted exactly like a Caesar salad at Zuni. Her writing is engaging, clear, enthusiastic, and persuasive. The book was given the James Beard Award for Cookbook of the Year in 2003; Zuni was named Outstanding Restaurant in the country; and the following year she was named Outstanding Chef of the year.

And now she's gone, and there's nothing to be done but be thankful for having known her, and for the generosity of her work. Next time we're in town we'll have a Martini at the bar at Zuni, and maybe some anchovies and celery, or dates and Parmesan. She'll be there, of course; but it won't be quite the same.

Posted by Charles Shere at 9:31 PM

The tributes and reminiscences will stream in for quite a while, and I won't try to keep up with them all. But since posting this, one has come in I can't ignore: gracefully written by that fine man Russ Parsons, of the Los Angeles Times: read it here.

I guess Judy left in time to prepare a welcome meal for Nelson Mandela.