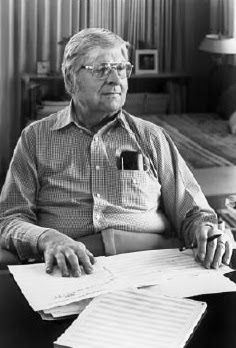 THIS IS HOW I like to remember Robert Erickson; he looked very much like this, as I recall, when I first met him, in 1963 or so.

He was then in his mid-forties, stocky, flaxen-haired, healthy though not particularly athletic, satisfied I think with his life, fully engaged with his metier. He was a composer, and a significant one, and I don't think he particularly cared, then or ever, about his place in history or even among most of his colleagues. He liked music of nearly every genre, and he liked much of the music being made around him, and he liked his own music.

He was recommended to me as a teacher of composition; but I don't think he ever had many illusions as to just what the teaching of musical composition could actually accomplish. He taught technical matters: the selection of pens and inks and rulers; the extent to which notation could be depended on; how scores might best be reproduced in those days before Xerox, and how they might be submitted in the hope of performance.

Most of all, at least in my case, he taught by example: staying with a project wherever it might take you; maintaining an open mind about your own work and prospects; not getting distracted by musical politics; not getting bogged down in taste — though on that last score he wasn't slow to announce his own tastes: he disliked tick-tick rhythms; he thought six-eight meter was particularly offensive; he especially disliked formula.

He'd been recommended to me by the composer Gerhard Samuel, with whom I was at the time pretending to study conducting — chiefly by attending every rehearsal of his Oakland Symphony, where I learned about orchestral balance, effective notation, the scaling of dynamics and tempo, and that sort of thing. Gary and Bob had known one another in Minneapolis, I think, and were part of what I've come to think of as the Minneapolis-California migration of the late 1950s and early 1960s, when they, and Will Ogdon, and Glenn Glasow, and Ernst Krenek all made that move.

I've written about Bob here several times, principally three years ago but most recently just last November, when I was pleased to hear his four string quartets performed in San Francisco and Berkeley, splendidly, by the Del Sol Quartet. They were then preparing to record all four quartets, and last night we were at the release party for the CD (New World Records 80753, two CDs), now available online or, I believe, through iTunes. You're better off with the physical CDs, of course, because then you'll get the liner notes, which I wrote.

The string quartet was an odd medium for Bob, I always thought; he loved innovation, thinking outside the box, and the quartet has a reputation for the hidebound. Listening to this survey, though, you see how he addressed the challenge. You witness the California "maverick" "avant-garde" sensibility engaging the great musical tradition: flirtation, then coming to terms; then finding entirely new purpose. As I wrote in the liner notes, the First Quartet (1950) is rather a conventional structure, though quirky and interesting and often, especially in the middle movement, quite melodic.

The Second Quartet (1956) is miles away from the First. From the very opening, even a casual listener will be struck by its greater openness, the ease and extent of its spatial dimension, the huge range of loudness, tone color, pace, texture. Where the conversations of the First Quartet had been contrapuntal, directed, like rational and logical disputations proceeding toward a logical outcome, those of the Second Quartet are fanciful, exploratory, playful but not according to so many rules.

Solstice and Corfu, the final two works for string quartet, are quite later, from the middle 1980s, and belong to Erickson's final period, when his music was oddly both expansive and innig, cosmic in outlook and scope yet intensely personal. They are, I think, valedictory pieces, and hearing Solstice again last night, in the immediate personal context of the matter of the previous post to this blog, was — not comforting, I don't feel comforting is anything I particularly need, but a reminder of eternal matters. I think Bob would smile, for a number of reasons, none of which he'd offer to bring up, if he heard me say, as I might, that I treasure these late pieces of his as participating with the late B**th*v*n. I'm sure he privately — very privately — aspired to that.

My biography, Thinking Sound Music: the life and works of Robert Erickson, is still in print. You can order a copy at the usual places online.

Posted by Charles Shere at 3:41 PM