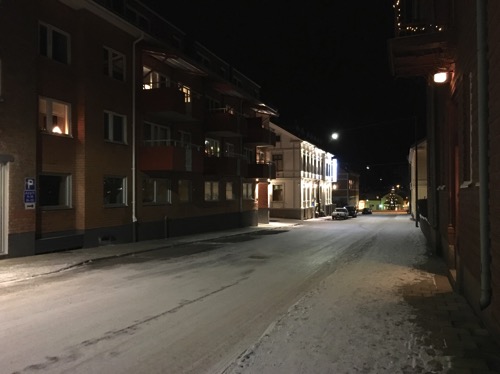 Hotel Amber, Luleå, December 14, 2015—
ON PAPER it didn't seem much could go wrong. After a long night's sleep in a comfortable bed in the home of an old friend's expatriate son and his companion, and a morning lazing about the center of town, and a delicious long lunch (described here), we had nothing to do but charge up the iPhones, write up a few notes, and hop the bus to Luleå, continuing our northward trek in search of the elusive aurora borealis.

I'd already booked the next hotel, this comfortable, inexpensive, pretty little place a couple of blocks from the bus station. True, their dinner closed down at 7:30, but it had been a fine, filling lunch; besides, there'd be a bar or café nearby for a nightcap. There was free wifi on the bus, and I have plenty of reading matter. So we joked a bit with the alternate driver — these long-distance buses apparently routinely carry two drivers — and settled into our seats, mine by the window so I could peer out for the aurora.

The bus went hardly ten minutes, then stopped by the side of the road. I was engrossed in George Packer's engrossing profile of Angela Merkel in The New Yorker and paid no attention for a fair while, but it began to seem we were sitting for an awfully long time…

Finally an announcement was made, but of course in incomprehensible Swedish. We sat and waited. No serious problem here; we aren't making a connection to another bus or train or anything; we just want to get to our hotel.

The alternate driver appeared with a can of ginger cookies and a tray containing cups of coffee — I don't know where he'd found them. We asked what was happening. Problem with the compressed-air supply, he said; when the bus is turning, or the door is opening, it needs compressed air, and there doesn't seem to be enough; he doesn't want to drive the 265 kilometers to Luleå without enough compressed air.

In that case, I suggested brightly, it might be a good idea to get another bus.

Just what we're doing, he said; when there's enough air pumped up, we return to the barn and switch buses.

And so, finally, we did; but the barn was to the south of Umeå, and we lost about an hour. I finsihed the Merkel profile. (I very much recommend it; you'll get some insights into the national mentality of her nation.) Fine, I thought; I'll just get some Internet stuff done. But the wifi did not work on this bus, apparently it does not run on compressed air. We drove through the night, stopping at a few towns and one minor city along the way.

There was a movie, but it was on a screen at the front of the bus, some distance away, and I didn't have headphones. In truth I prefer to watch movies on airplanes with the sound off, making up my own story, and I thought I'd just do that here, too — but it turned out the movie was subtitled, so it began to make some kind of narrative sense.

But the subtitles were in Swedish, and appeared only sometimes — when the cast was communicating in Sign. When they actually spoke to one another there were no subtitles. Well, yes, sometimes there were. Was the cast speaking some of the time in Swedish, so no subtitles would be needed for most of us on the bus, and at other times in some other language? French, perhaps — two of the characters were apparently named Nicolette and Quentin.

And why would a pianist be playing music to a young woman who communicates only in Sign? And why were people on a dairy farm? And why so much angst?

Ultimately we pulled into the Luleå bus station, a good hour late. The streets and sidewalks were covered with snow. We walked  v e r y    c a r e f u l l y  to our hotel, which was locked up tight. We were prepared: they'd sent us the front door code. An envelope on the desk had my name on it, and our room number and key inside. There was even a refrigerator in the lobby with free sandwiches and fruit.

Two details remained: to buy tomorrow's bus ticket to Haparanda, and the one from Tornio, across the river from Haparanda in Finland, up to Roviniema. Not much problem with the first, but the second eluded me after much trial: Finnish; then find a translated site; then discover the bus is sold out; then look for the next one; then fill out all sorts of blanks; then find our credit card rejected for lack of some code I never knew existed…

Oh well, it will all come out right tomorrow, I'm sure. We'll get up at 8 or so, have a nice breakfast here, and catch the 10:15 bus to Haparanda. I hope its air compressor works.

Posted by Charles Shere at 3:21 PM