ONE OF MY FAVORITE Dutch painters is Pieter Jansz. Saenredam (1597 - 1665), who specialized in the depiction of whitewashed church interiors. He did not, of course, paint the image you see here: I photographed it a few days ago in a friend's house in Voorburg, where we were staying a few nights.

I took it, in fact, the moment we stepped inside the front door, before even taking off my coat. The light was extraordinary, as it so often is in this country — can something so frequently observed really be called extraordinary?

The staircase is quite steep and narrow, and its treads are quite shallow: these staircases are dangerous to those unaccustomed to them. There isn't room to spare in Dutch cities. The house is in a long row of similar houses, all attached in the row. It rises three storeys and quite likely has a loft above the third.

Before stepping through that door you can barely see, on the right, let me remark on the paint. I think the Dutch make the best paint in the world. I don't know whether it's available in the United States — I seem to recall environmental regulations have forbidden its import, but perhaps that's changed. It's glossy, hard, and rich-looking; there's really nothing like it. That's what's on that door; and you'll see it in other photos here. 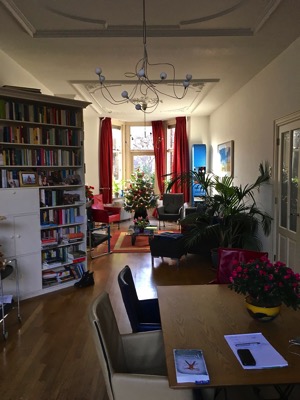 Stepping through that door on the right side of the entry hall we find a fine, spacious sitting room. Narrow, I suppose, but graceful for its high ceiling, filled with balanced light from large windows on the two ends. It was originally two rooms, as suggested by the ceiling panels; the bookcase bay recalls the original arrangement and separates the sitting area, at the far end of the photo, from a more worklike area with a table seating six and, out of the photo, a small upright piano. 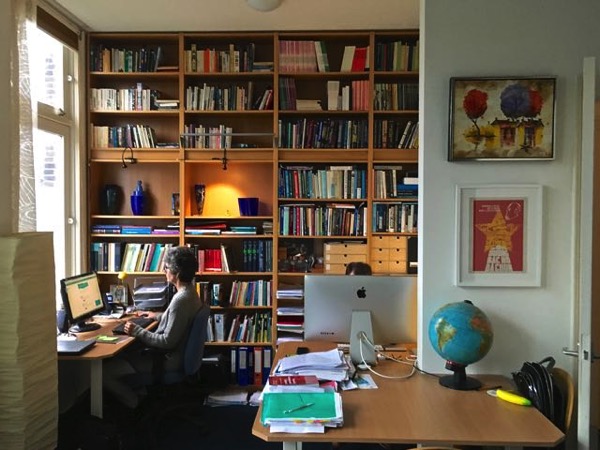 Upstairs a bathroom and a bedroom have been joined and reconfigured as a home office, with two desks, floor-to-ceiling bookshelves, a conference table, armchairs and a studio couch. At the back of this second floor, the master bedroom and bath.

The third floor contains three smaller bedrooms and a half-bath. The kitchen is tucked into the ground floor at the back of the sitting room, and has also a breakfast table capable of seating four or five easily in a glassed-in room, a sort of conservatory, that leads to the long, beautifully planned back garden.

A VERY DIFFERENT HOUSE always pleases and surprises us a couple of hundred kilometers north, in Friesland, in a village so small it lacks church, cafe, gas station — nothing but residences, a bridge over the canal, and the beautiful Frisian skies. 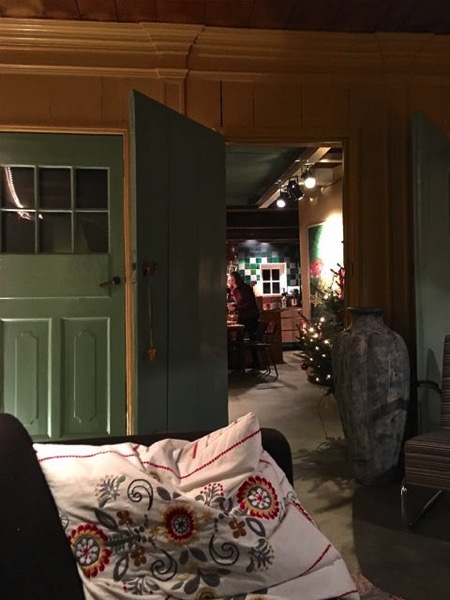 Here you're looking through one of a pair of doors separating sitting room from entry hall and, beyond it, kitchen, with its tiled wall. The house is small, brick, and a national monument; the outside looks as it must have a century ago and more; and the interior, while modified for up-to-date appliances and technology, respects traditional visual and intentional configurations.

Like the Voorburg house, this cottage boasts its dramatic staircase 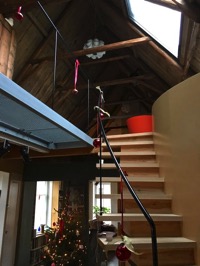 leading to the sleeping loft, where there is also room for a small desk, laundry appliances, and storage.

The house belongs to a professional chef, and the open kitchen, filling one end of the ground floor, is one of its most impressive features. 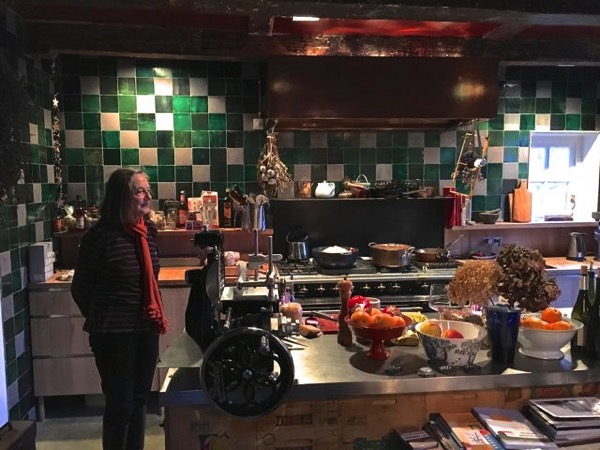 Tiled walls, a huge French range, a capacious wooden sink, and under-the-cabinet refrigeration, as well as a large island countertop separating the kitchen from the dining table, facilitate preparation and service of anything from an omelet to a major culinary undertaking. The hood handles any ventilation problems readily — and silently, with a remotely located motor. 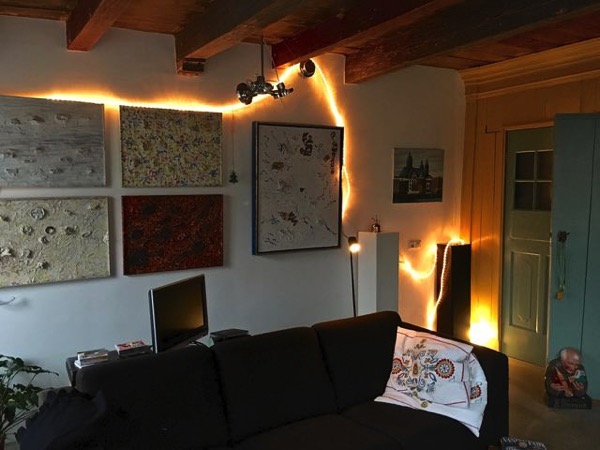 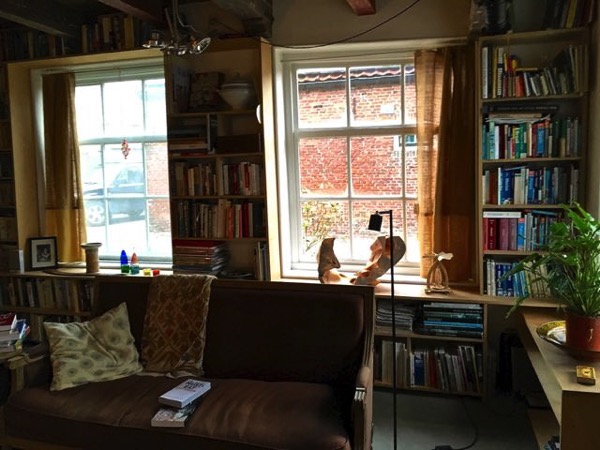 At the other end of the house, even though it's right on the road, the mood is calm. Paintings on one wall, books and windows on the facing one, comfortable settees and chairs express the ever-present Dutch quality of gezelligheid, usually translated as "coziness" but in fact so fundamental a value it transcends specification. 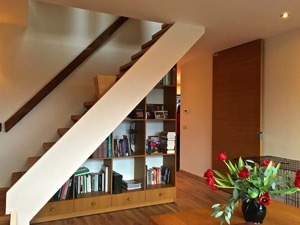 DRIVE SOUTH a couple of hours and you'll come to the heart of the Dutch orchard country, the land between Maas and Waal, two broad rivers embracing flat country that's been generally overlooked by industry and tourism.

Here friends of ours have transformed a century-old farmhouse, which had also contained the office for the farm's steadily growing poultry operation, into a spacious, comfortable, orderly home.

Here the staircase has room to be spacious and public, though it leads from the public floor to the bedrooms above. In fact this is a second entry hall, a good idea in country prone to rain and mud in the winter. I was particularly impressed with the hugee solid wooden door you see on the right-hand wall: it extends floor to ceiling, wall to wall when swung shut. It usually stands open to bring outside light into the kitchen beyond. 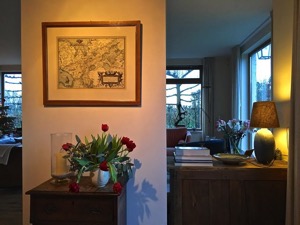 Deferring to the owners, I won't show you the kitchen itself, always a hub of activity. We're standing in it, our back to the stove, and looking past a display wall into the main sitting room beyond. I tried repeatedly to photograph the map on the wall, which is quite old, putting east at the top, and which nearly centers on this neglected corner of Gelderland, sometimes flooded delta country.

Our host explained the isolation formerly characterizing this country. The rivers run swift, and in the time before automobiles it wasn't easy to get off this island; people lived isolated even from nearby Nijmegen, twelve miles as the crow flies.

A few years ago we walked through the area, on the Lingepad, one of those marvelous Dutch long-distance walking routes. We stopped at a restaurant on the edge of the Waal. A fence around its terrace had provisions for boards to be inserted between posts, then caulked with straw and horse manure, to keep floodwaters out.

Our host is a poultryman; he and his brother inherited the business from their father, but then, when it grew too big for this tranquil countryside, relocated to Bulgaria. It's an interesting story: they dismantled the huge feed mill their business needed, loaded it on a barge, and sent it up the Rhine, then down the Danube to its new location. The whole trip was carefully planned, but heavy rains caused river levels to rise, threatening passage underneath bridges. 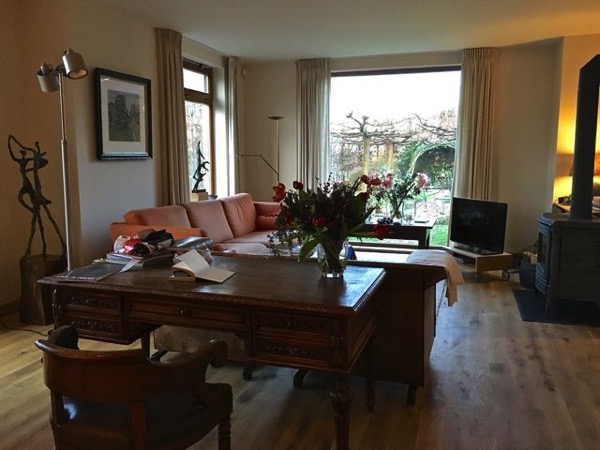 Here's a look into the less formal sitting room, where you could do some serious writing if you liked, resting your eyes gazing out into the winter garden; or yu could watch a little television, or simply meditate on the fire burning in the stove. 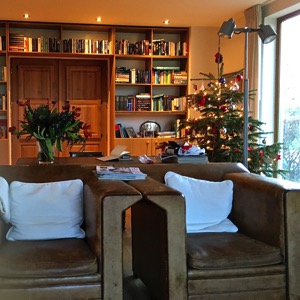 Another sitting room offers bookshelves and a pair of the most beautiful leather club chairs I've ever seen — I'd ship these chairs home in a minute, if I could pry them away from their owner. This is Christmas season, or was when we were there, so there's a small tree at the window. The doors between bookshelves have hinged panels, closed here, readily opened to let yet more light in. I don't know when I'e seen an interior so thoughtfully lit.

City row-house; provinicial cottage; country farmhouse. I hope our hosts in these places — and others I haven't mentioned: A small-town apartment; a big Amsterdam canal apartment — I hope they'll pardon this intrusion into their spaces. I share them with the blogsphere with a feeling of affection and approval; it seems to me they portray taste and modesty in a manner most instructive in this age of excess and commodity…

Posted by Charles Shere at 3:11 AM