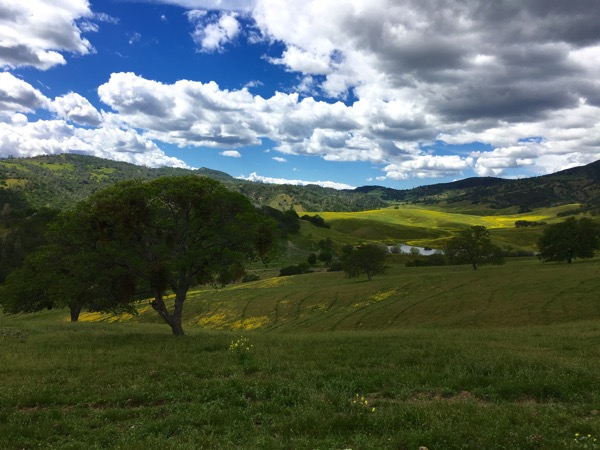 Paso Robles, March 29, 2016—
WE'RE ON A SHORT road trip with a 13-year-old grandson, introducing him to favorite California roads of ours. Until recently I've hoarded some of these roads, telling only certain and special people about them, not wanting them to become too well known. Today I discovered (once again) the folly of this kind of stinginess. They've become better known, of course, as the California population has grown from 20 million in 1970, when we first drove some of these roads, to nearly twice as many today.

Still, they are marvelous roads, two-lane roads, relatively well paved for the most part, through the ranchland and mixed woodland tracing the San Andreas fault from Hollister in the north to San Miguel in the south. The northern half of the road began this morning, for us, at one of my favorite landscapes, looking across the broad San Juan Valley northeast of the Mission San Juan Bautista, and took us first to the formerly sleepy agricultural town of Hollister — now famous as a tee shirt brand and disfigured by shopping centers — to Highway 198, which runs east-west from San Ardo to Coalinga, neither of which towns we actually saw.

The southern half — ah, that's a very special road. It's been improved since last I drove it, several years ago; more of its own northern half has been paved, and today there was no water in the creek, meaning we didn't have to put our Prius to the test of fording open water.

From the summit, at 3500 feet, the road — now gravelled, not paved — drops down into Parkfield, population 18. Today both the motel and the restaurant were closed, so we continued, turning southwesterly, to close the day at a second favorite mission, San Miguel, where the church has been beautifully restored following a long closure after the disastrous earthquake of Dec. 22, 2003.

The proximate motivation of this trip was wildflower season. This year's rains suggested there would finally be a season worth seeing, and the Highway 198, at Priest Valley, promises much for tomorrow's leg, in the Carrizo Plain. The photo at the head of this post was taken toward San Miguel; the one here at the foot, in Priest Valley, looking north. Buttercups, poppies, lupine, owl's clover so far, and others not yet indentified. We'll see what happens next. 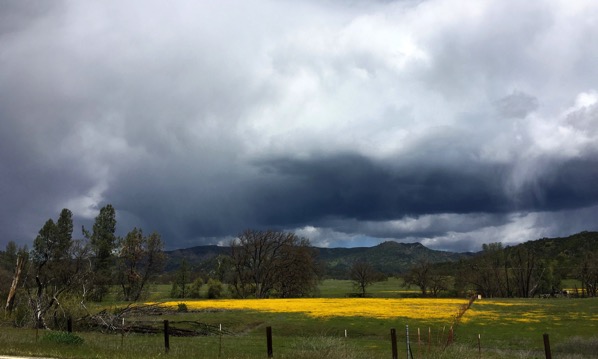 Posted by Charles Shere at 9:17 PM

No one talks seriously about it.

I was inventorying recent acquisitions to the stock recently, and came upon an early issue of Aperture, the photography periodical that Minor White started way back in the 1950's, as a venue for serious presentation and discussion about the craft.

In it, he writes a brief introduction to an issue devoted primarily to the work of Ruth Bernhard. The piece is about population, and what it's done to his beloved Oregon countryside.

When I was a boy, my stepfather took us up camping to a place called Sparks Lake, Oregon. This would have been in 1951. I can still remember him complaining about a recent Sunset Magazine article devoted to Sparks Lake, which he assumed would "ruin" the area by attracting hoards of tourists. Today I doubt that it did that, since the place is a little barren with its black volcanic soil and relative remoteness.

But we're all going to suffer the loss of open land and picturesque countryside, as people keep swarming across borders and crossing invisible barriers to settlement. The natural world is suffering, but its cries fall on deaf ears.

We're in many ways living in "the last time" as it's been said. We're the last ones to see and appreciate the natural world as it appeared to our ancestors, nearly all of whom couldn't imagine how fast all of it would be used up (consumed) and desecrated,