Eastside Road, May 26, 2018—
I MET GAIL CHADELL NANAO in 2006, I think, when we were invited to the Nanao home in Berkeley for dinner. Her husband the painter Kenjilo cooked beefsteak on a hot griddle at the table; it was delicious. Five years later we met again when I visited Kenji’s studio in Oakland to discuss writing an essay for his forthcoming retrospective at the Triton Gallery in Santa Clara. A bittersweet occasion: Kenji was in his last year.

After Kenji’s death we tried to maintain acquaintance with Gail, but you know how it is: we live sixty miles away; our life is full and so is hers. (Negotiating the dispersal of Kenji’s studio must have taken all her energies: I’m always struck by the enormity of the tasks faced by painters’ survivors.)

And for some reason, admirable as her work is, it is not represented in Bay Area galleries. We had driven over to Sacramento in 2012 to see her paintings and ceramics at the B. Sagata Garo Gallery — a memorable show, I thought. But since then, nothing, until the other day, when we were in the town of Sonoma to see her first retrospective.

I suppose Gail’s resumé is that of many women of her generation. She came early to her art, studying paintings in the Brooklyn Museum and the Metropolitan and the Museum of Modern Art in New York City; she attended the university in Buffalo where she was knocked out by an exhibition of Clyfford Still at the Albright-Knox; she continued at the ssfo Art Institute where she was moved by the community that grew up around the two poles then current, Bay Area Abstract Expressionism and Figurative, as practiced by Lobdell, Jefferson, Bischoff, Diebenkorn, and Oliveira, and Neri, Joan Brown, and Jay De Feo.

At the SFAI however she also met and soon married Kenji. Soon, in the early 1970s, they had a child. Before long she was working, full time, as a social worker. She stopped painting until 1996, when she and Kenji were awarded a stay in Norway at Ekely, Edvard Munch’s home and studio. The Norwegian master’s emotional power seems to have reawakened her own, and she resumed painting. 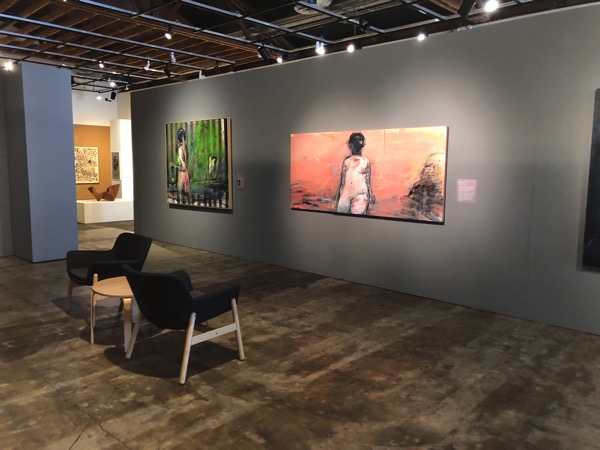 The career curve is worth considering: it began with the influences of Symbolists like Beckmann and Munch (though already in her childhood she was fascinated by Modigliani), caught fire through the abstract ecstasy of Still, ripened in ssfo through the influence of Oliveira and Lobdell, then slept for twenty years, then was reawakened by immersion in the work and place of Munch.

Through it all, of course, she was living with the presence of Kenji and his work — painting and printmaking which on its face seems to have little to do with the figurative emotional depth of Gail’s influences, though behind the serene surfaces of his work I would argue there’s considerable human experience. (I’ve written about Kenji’s work here and here.)

Now, in this new age of awareness of the place of woman in the human condition, Gail Chadell Nanao provokes a renewed consideration of a female sensibility. That’s at the base, I think, of Susan Landauer’s essay in the catalog accompanying the exhibition she’s installed in the Sonoma Valley Museum of Art, in which she argues for a uniquely female eye guiding Gail Nanao’s work, the emotions in her work, and her approach to the nude (especially the female nude).

Laudauer may be right. I’m not sure I agree with the idea that the painter’s eye is necessarily gendered; I think much gendering is done by onlookers. I’m more interested in how this work acknowledges its source community while maintaining its own identity. Nathan Oliveira, the early Joan Brown, and other familiar Bay Area masters clearly look on among the paintings in the Sonoma Valley Museum gallery, but Gail Nanao’s work holds its own. Her canvases are strong and beautiful and Susan Landauer is right to observe that the work expresses a uniquely individual viewpoint.

I admire the great San Francisco Bay Area work of its time for an unusual quality: strength, even power, that is somehow devoid of ego-expression. This separates it from, lifts it above the work of, for example, Clyfford Still. (Picasso is another matter, and worth contemplating.) What reassures me in Gail Nanao’s work, which goes on — the most recent painting here is from 2016 — is its evidence that this quality is not merely of that time of fifty years ago; it is a living quality, probably more valuable and needed than ever. It’s a quality undoubtedly born of the tragedy of the mid-twentieth century in the wake of World War II (and such later ones as the Kennedy assassination, which influenced one of Nanao’s early paintings, Birthday Party), but is transformed, in these paintings, from witness to previous tragedy to oracle of the near future.

And through it all, beauty; the beauty of acknowledgement and patience and expression and realism.

And lyricism. There are two or three watercolors on view, energetic but tender and affecting. And a number of painted ceramic pieces — vases, plates, bowls, and trays — that might easily be overlooked. Don't miss them.