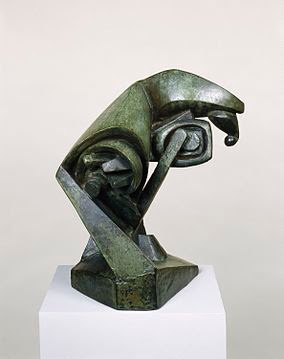 The Large Horse, bronze, by Raymond Duchamp-Villon, one of Marcel Duchamp’s older brothers, who was destined finally to take sculpture in a straight line past Rodin — except that World War I killed him in 1918.

In fact this work is posthumous: Duchamp-Villon made a small version, in plaster, in 1914, apparently leaving instructions as to the size he wanted; Duchamp and his surviving older brother Jacques Villon had an edition of casts at the final size — 150 × 97 × 156 cm — made in 1930.

Of course it is stupid to look at a photograph of a sculpture. This one particularly: you have to walk around it, slowly, looking at the constantly changing edges, perhaps with one eye; and back away and approach, and raise your head and lower it…

I suppose if you have to classify things you’d say this is a rare example of French Futurism. I wish Duchamp-Villon hadn’t joined the army — he served in a medical corps, contracted typhoid fever in 1916, and died of it two years later, just before the Armistice. Tragic.

Posted by Charles Shere at 5:30 PM