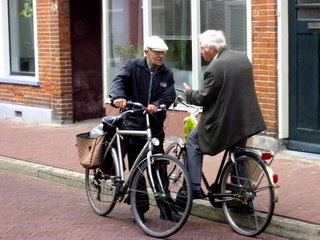 FOR SOME TIME NOW, since the middle of September in fact, I’ve been meaning to show you this photo. Seems to me it says all you need to say about what routine automobile use has done to community life. This was taken on a fairly busy street in Groningen, a street leading from the market square at the heart of that provincial capital in The Netherlands out toward the edge of town where the university campus and its great medical center are situated.

We were there with a couple of friends, having transferred our intention to walk the shorline of the old Zuider Zee to the less rainy and windy route Lindsey and I already knew from a long walk taken five years ago. We had just arrived in Groningen, and were walking down the street toward our hotel, when I was struck by the sight of these two old guys having a palaver in the middle of the street.

This is by no means an uncommon sight, but our two friends, new to Holland, remarked delightedly on it, so I pulled out the camera for a quick shot.

I doubt that had these two guys would have stopped for conversation had they been driving cars. In Groningen, as in so many other Dutch villages, towns, and even cities, residence, shopping, and offices are frequently mixed. You can walk from one end of Groningen to the other in twenty minutes. We spent nearly a week there, using it as a base for walks in the countryside, and we never once even thought of using any means of transportation within the city but shank’s mare, our two good trusty feet. There’d be no point in it, not even when it gently rained.
Posted by Charles Shere at 6:09 PM