Once More to L.A. 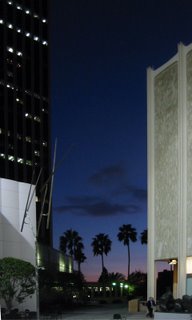 A LITTLE ODD to say of Shakespeare’s Othello that all’s well that ends well, but that’s how it went Thursday night. Until the intermission we thought we were seeing something else, a play called Iago, interesting, abrupt, a little rough, thrown out of whack by an apparently minor character, a Moorish admiral, unfortunately played by an understudy who was still carrying his lines with him.

After intermission, though, things turned around. Othello stayed on the book, even consulting it while strangling his poor wife, but his voice and demeanor brought the role back to center where it belongs. Iago was more convincing when on the defensive than he’d been earlier in the play, and the ladies were fine: Desdemona small, vulnerable, wronged, uncomprehending; Emilia angry, violent, believable. I found myself wishing they’d all lived, so there could be another play, telling us what might come next. But of course by the end of the play nearly all the interesting folks were dead as a doornail, and we felt like Shakespeare had hit us in the stomach once again, and we shuffled back to our motel in a rather bleak mood.

The only hilarity of the day had been inadvertent, at dinner, in a restaurant we’ve tried before: Fresco, whose Venetian decor has housed a Sicilian-Neopolitan menu a couple of blocks from this theater company — A Noise Within — on Glendale’s Brand Street. The food was good enough: my canneloni were rich and tasty, and Lindsey liked her mushroom ravioli very much. But soon after we sat down we were surprised to see a small Italian-looking fellow walk in with a cello case. Before long he’d unpacked the thing, set up a pre-programmed synthesizer, and begun playing the most god-awful versions of soft rock, Strauss waltzes, and easy listening — though he made any kind of listening difficult in the extreme.

I’ve only once before heard such blatantly bad playing, from an amplified violinist on a street in Rome. Like that fiddler, our cellist was ultimately ushered away by a waiter, but not before he’d labored through the entire prelude of Bach’s C-major Suite. On his way out he bowed to Gaye, who was watching him astonishedly. Live amateur cellists might best be banned from restaurants.

Yesterday was better, a fine day: two restaurants, two museums, three engaging one-act plays; all shared with two friends. Lunch was at Tre Venezie, a real Veneto restaurant in Pasadena, where the cooking expresses the rich, earthy complexity of a culture that triangulates northern Italian, Austrian, and Slavic sources, and the result is served in a comfortable, quiet, intelligently furnished room (paintings, books, bottles) that has likely never heard an amateur at the cello. We had Savoy cabbage and house-prepared guanciale, pork jaw; and after that I had the best fegato Veneziano I’ve had outside Venice herself: calf’s liver, sliced consistently thin, sauteed in white wine, oil, and perhaps a little bit of butter, served with perfectly sweated sliced onion and beautifully grilled polenta, with an interesting Merlot from the Collio hills on the Slovenian border.

Afterward a tour through the Pasadena Museum of California Art to see landscapes, mostly, with a few portraits, by an American impressionist, Allston Something, whose early work, at about 1900, showed great promise, but whose later work, on extensive travels but chiefly in Southern California, seemed to me to settle into too-quickly executed illustration.

They weren’t improved by their contrast with the Pissarros and Cezannes we saw next, at the Los Angeles County Museum of Art — a fine show from New York’s MOMA, focussing on the work those two friends did, nearly side by side, in the significant years around 1870 when Modernism was emerging from landscape painting in the vicinity of Pontoise. Short conclusion: Pissarro was about light as it it is expressed by surfaces; Cezanne was after the substance and weight behind those surfaces, and the physical presence, almost the substance, of the light and air that makes them visible and distinct. This is quickly said, but it took these disciplined, gifted painters years to reveal the concept, which underlies everything the Impressionists and their followers achieved in the years following.

The Actors’ Gang, an engaging and very physical theater company whose artistic director is Tim Robbins, has moved into a fine, newly recycled historic building on the edge of Culver City, a former electrical plant facing a small, pleasant park on Venice Blvd. Here we had a quick meal of fish and chips and Martinis at Pacifico, a fast, simple marisco restaurant, and then continued our globetrotting with three one-act plays from Japan: a melodramatic portrait of smoldering small-town resentment; a commedia dell’arte-cum-Kabuki flavored account of a family’s despair at the apparent idiocy of a poetic son; an Albee-esque view of three ghosts, former actress-prompters eternally reviewing the competing small successes of their former lives.

It was an impressive evening of theater, stylish, exotic, constantly fascinating. I wish these guys would bring us a play of Michael McClure’s.
Posted by Charles Shere at 8:51 AM