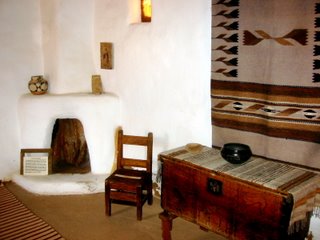 A room at Las Golondrinas

I'VE BEEN READING Harvey Fergusson's history of the Rio Grande valley -- sorry, Deborah; I'll send it back to you tomorrow -- and it confirms my complex feelings on revisiting Santa Fe. As I noted a few pages back, the area's grown immensely. There are tract developments around the city, and the city itself seems to be sprawling more than ever.

I imagine one doesn't notice this except at night, from the air. There are still remarkably few multistorey buildings in Santa Fe, and the low stucco houses, uniformly the color of the earth, flat-roofed, and tucked into the landscape, aren't really apparent from the highways.

We weren't in the area for the delights of Santa Fe herself beyond the usual tourist walkabout -- Indian merchants in front of the Palace of the Governors, the Cathedral, the Plaza. Santa Fe's a town that's worth a week's stay, another when you add the rewards of the country around it: but schedule didn't permit, this time.

So we contented ourselves with three cafés and three museums. The former were a necessity: I do like a second latte in mid-morning, and I wanted Internet access to post these blogs and catch up on e-mail. Life is so bland without the daily spam, don't you think? So the first morning we asked if wi-fi might be available with an espresso on the side, and were quickly given a printed list of a dozen or so wi-fi equipped cafés.

The Back Door Café: sounded promising, only a block or two away at 201 East Water Street. There turned out to be no 201 on the street, though, no matter how hard we tried to find it. Finally an obliging fellow in a jewelry shop -- there are scores of jewelry shops in town, many between us and the Back Door -- looked it up in the phone book. It's at 102, not 201.

You would expect 102 to be at the beginning of the block, roughly across the street from 101; but it is not. Most of the block is taken up by a parking lot, the one we should have used instead of the space whose meter was ticking away. Maybe over here? No; now we've got onto a back alley, and now the next street...

We found it, of course, hidden behind a complex of shops at the wrong end of the block, and found a café delightful in every way -- quiet, convenient (once you know where it is), and run, this morning at least, by a cheerful, friendly fellow who made a fine latte -- though out of inferior beans, I'm afraid.

Next morning the kids say Why not try Atomic. We park almost across the street, at the same meter on Water Street, I don't know why no one uses it, and try Atomic. The wii-fi isn't working this morning: a recent thunderstorm put it out of commission, and it hasn't been reinstalled. The coffee was okay.

We notice, though, another place across the street, not listed on the tourist bureau's handout. Here is the personality and connection of Back Door, the parking convenience of Atomic, and really decent coffee, so Zélé is is the headquarters from now on.

SANTA FE IS A TOWN of museums. Three big ones are clustered in a single place, for example. If it's museums you're after, plan to spend a week here. We settle on only three, and begin, the day after arrival, with the Children's Museum -- a sort of junior-grade Exploratorium, with hands-on demonstrations of magnetism, hydraulics, film plasma, botany, and the like, disguised as puzzles, games, a giant bubble-blowing apparatus, and so on. In the Mesa Verde museum we had marveled at atlatls; here we were equally bemused by axolotls, even uglier.

(Choclatl and aquatls had already featured on this trip, in the culinary department, so we've been getting our fill of Nahuatl.)

In the afternoon we managed to work in a visit to the Folk Art Museum, truly a marvel -- and a testament to the mania of collecting, for it centers on an enormous pile of stuff assembled by a single connoisseur. Here, in a room big enough for a hockey rink (though without the spectators), you look at houses, trains, farms, entire cities, ships, armies, churches, open markets, airplanes, animals, -- all the familiar sights of ordinary life, at least as it was lived in simpler times; all made of clay, terra cotta, stone, metal, wood, and cloth, at made by folk of different countries and in various scales but never too large for any single item to be played with, for this is a collection of toys.

Other galleries were devoted, the afternoon we were there, to an imposing exhibition of Japanese ceramics; to historical metalwork; to tools and clothing and religious objects. For years there's been an affinity for folk art among the "higher" art mentalities and venues of Santa Fe; here, thirty years ago, the cottonwood sculpture of Felipe Archuleta attained the position of high art, as years before Maria Martinez and others were promoted, from the anonymity of Pueblo potters, to the international standing of fine sculptors.

This is a two-way street, and one of the things I most admire in some painters I know is their openness to the humor, the apparent crudity, above all the immediacy and honesty of these "folk artists." But this takes me too close to art criticism, and I'm not going there today.

I think my favorite museum of the three was Las Golondrinas (Spanish: the swallows), a historical out-of-doors museum south of town, out near the racetrack. This is the farmstead of an old rico family. The ricos were the wealthy families descended from the recipients of the old Spanish land grants, as I understand it; they assembled large, successful rancherias, their economies based mainly on cattle-raising.

Here are the original houses, their interiors "restored" to a semblance of period authenticity, and the outbuildings, devoted to specialized purposes: blacksmithing, hide-tanning, molasses-making, a saddlery, etc., etc. An authentic-looking garden of the eternal trinity occupies a fertile stretch of bottom land: corn, squash, beans. The Santa Fe River, what's left of the poor thing (it's totally dry in town), runs through the place, mostly diverted into an acequia bordering the garden and, at one time, supplying a bit of energy to a small watermill.

It's fascinating to visit this sort of place after having visited the great gardens of Cordoba, Seville, and Granada; and after having read James Michener's book Iberia and Harvey Fergusson's Rio Grande. One of the real rifts in the American mentality is that between the Spanish and the Anglo-Northern way of seeing things, of dealing with life and nature. There's little of the shopkeeper or petty-bourgois in the Spanish temperament. Perhaps the Pueblo way lies between these two conflicting European influences; perhaps the eventual gift of New Mexico to the evolving American way will be to restore a sense of appropriateness in economy, worship, and community -- it would be nice to think so.
Posted by Charles Shere at 7:21 AM