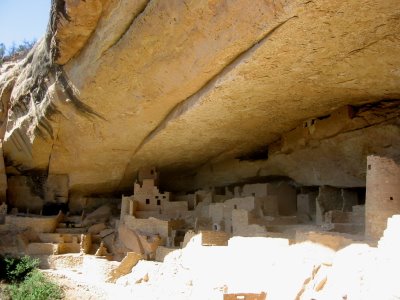 LET'S SEE, NOW, how long has it been? I'm a week behind, and things that seemed important then are fading fast...

From Green River we turned south for the first time, after hundreds of miles eastward. The country remained red-rock. At one imposing feature, a huge stone arch demands an inevitable photo. We pull off the road behind a number of parked trucks. A young woman asks us if we'll do them a favor.

Let me guess, I reply; Take your photo? Of course.

A couple of dozen youngsters run across the road, thankfully not all the way up to the arch, stop to group themselves, and I snap their picture. Then, watching them make their way back, I think I see a better photo for us to have: 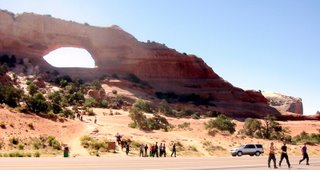 They're a group of firefighters, presumably traveling home from the convention or whatever it was that kept us from getting a room in Ely the other night. We thank them for all their work and wish them well in the coming season: it isn't going to be easy, we think.

We drive through Moab, a town apparently entirely given over to outdoor recreation; then Monticello, more to my taste -- a town with a very nice local-history museum: How They Lived; What They Did; that sort of thing. A very pleasant conversation, too, with the museum-keeper: but afterward Lindsey remarked on something I hadn't noticed, the town's complaint with the federal government.

Mining, a staple of the Great Basin states, has gone through a number of phases. Eureka and Ely, for example, are currently the centers of a lot of gold-mining activity. Silver, lead, coal, molybdenum, gold; each in turn is mined, plays out, lies dormant, then succumbs to the new onslaughts enabled by advances in mining technology.

And by new demands: most recently, in the last fifty years, the hunger for uranium -- a metal for which there is, in my opinion, no use whatever.

Monticello was a farming community, the soil sufficiently fertile and the water sufficiently present to provide one of those Promised Lands to the early Mormons. But mining provides greater immediate profit, and the discovery of uranium ores changed the local economy.

Everything has its price, though -- even though the price may be deferred; deferred so long that those who profit can leave it to grandchildren to pay. The cancer rate in Monticello is alarming, and the citizens are upset. We wish them good luck with the current federal administration, apparently more resolved to add to the problem than to resolve it.

We drive on to the day's goal, Mesa Verde. This is what has brought us across central Nevada and Utah: my original intent was on revisiting Monument Valley and the Canyon de Chelley, among the most memorable places we've seen; but we'd been told Mesa Verde was even more imposing. Since you can't disagree with such claims without personal experience, we've come this way.

We followed one of those rental RVs up the long road to the visitor's center, arriving late enough in the day to take only one of the three guided tours offered us. It was hot, of course; it's been hot the entire trip. We drove on to the meeting-point for the tour to the "Cliff Palace" and waited among a passel of fellow rubbernecks for our pleasant young tourguide. We could see the "Palace" easily while we waited, and read about it on the descriptive panels.

Carbon dating, she explained, they test things. Do you believe that, he answered contemptuously, I don't believe any of that for a minute, they dont know anything about it, it's all just theories.

THE GUIDE APPEARED, under her Smokey the Bear hat, warned us about the steps and ladders, and led us to the "Palace." (I insist on those quotes: this is clearly no palace, but a small city, ingeniously built in a large shallow cave overlooking one of the fingers of valley leading up from the lower 7,000-foot New Mexico mesa into the Green Mesa we've just traveled, a fine country of pinon forest.

We begin, after a descent of 169 steps (I do have my little compulsions), sitting in the shade of an outcropping on the trail to the ruin. Here our guide answers questions patiently and informatively from the current thought on this fascinating subject. The "palace" was apparently a sort of community center, lived in by only a few caretaker families. At the top of the buildings is a series of storerooms; below, residence rooms and a very large number of kivas, those round ceremonial rooms dug into the earth, windowless, entered through roof openings.

Many smaller building-complexes are found in this and the adjacent canyons, perched above their cottonwood-bordered streams. It was there that the many extended families lived, apparently minding their own business most of the time, then gathering in this "palace" for special occasions. But what occasions? Why so many kivas?

The frustrating thing, of course, is that no one knows what went on here, or for that matter why everyone left Mesa Verde eight hundred years ago. In 1280, to be precise; and leaving behind enough food to last them for years.

I have, you'll not be surprised, a theory. I would guess the Mesa Verde complex was a fair number of decades or centuries a-building. At a certain point this community's civilization must have reached a kind of climax, marked perhaps by the completion of the "Palace" complex; and then a decline must have set in -- either a decline or a catastrophe, and there's apparently no evidence of that.

Overpopulation, then disease? Decadence, then indifference? Growth beyond sustainability?

The current headlines, about Stephen Hawking's warning that Earth may soon look like Venus, suffering from 250-degree heat and sulfuric-acid rain; and about the suggestion that we'd better start getting serious about emigrating to, say, Mars, resonate with these questions about the people of Mesa Verde.

The current thinking is that they simply moved out and settled further south, in the Rio Grande Valley; that their descendants live today in Taos, San Domingo, Santa Clara, and all those other Pueblos. Today's Pueblo people, as I understand it, still lack a written language, though their spoken language is rich and precise. (Language family, actually: four languages, none mutually intelligible, and each with its own regional accents.)

They therefore have a dedication to oral tradition, and our Mesa Verde guide suggested that today's Pueblo people speak of the Mesa Verde people as their ancestors -- though when I asked a very bright young guide in Taos Pueblo about this, a few days later, he shrugged. We've always been here in Taos, he said.

But why would they have made this migration? Either Mesa Verde was threatened or no longer sufficient, it seems to me, or another, preferable place had become available, whether through the decline of its own population, or the withdrawal of whatever threats had formerly made it unappetizing -- threats of climate, or disease, or subjugation by other civilizations.

The entire Southwest is dominated, when you're not in one of its modern urban centers, by Sky, Earth, and the continuous line that separates them; and the eternal distances always in your eye inspire a dreamy state of mind, open to influence and suggestion. This is of course much less true in these canyons. The Mesa Verde people seem to have farmed the mesa itself, and originally lived on it before "retreating" (if that's what it was) to these wonderful cliff dwellings.

The cliff complexes must have been more like today's urban centers. The eye isn't allowed to go far before it stumbles over a sign of human activity. That's true even today, after eight hundred years of abandonment. Imagine what it was like when these were living communities, full of people, baskets, blankets, dogs, bones, broken pots, and the sound of children playing, dogs barking, women gossiping, men boasting.

The state of mind changed when these people moved down into the canyons. Old-timers must have noticed this and tried to discuss it not only among themselves but, in a cautionary mode, with the younger generations. Some of the younger ones may have listened and grown bored with the clutter and the difficulties of the increasingly urban life.

The entire question seems urgent to me, for we may have much to learn from this history. Crisis comes upon us quickly and from neglected quarters. Today's Pueblo seem a particularly competent people, well or at least patiently enduring the requirement that they pursue their own way within a way imposed upon them from without. This may be a lesson to the rest of us.
Posted by Charles Shere at 11:06 AM