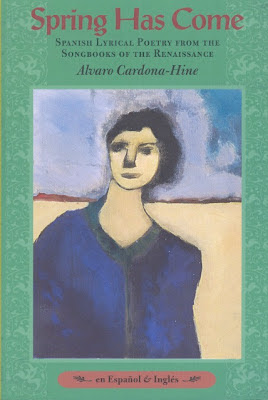 THERE'S A PROBLEMATIC DIALECTIC in poetry (I associate it with Ron Silliman) between language poetry and the "School of Quietude." I think it's analogous to that set up in the first quarter of the previous century between the followers of Schoenberg and those of Stravinsky. It's a trap, this dialectic, and I fall into it all the time.

Now here's my friend (I wish we were closer; we're too far apart, spatially) Alvaro Cardona-Hine who sends me among other things his delicious little Spring Has Come (Albuquerque: La Alameda Press, 2000), a collection, as its subtitle puts it, of Spanish Lyrical Poetry from the Songbooks of the Renaissance.

It's deceptive and disarming, this collection, chastely set out, often simply a couplet on a page, his translation below, lots of white space:


In that hillock, that one,
there's no room for so many.

His introduction investigates the interesting controversy among scholars, beginning a century ago, as to the origin of these lyrics, and proceeds to allude to that marvelous moment in cultural history when christians, moors, and jews (my downcase is meant merely to propose egalitarianism, making common what is proper) lived together peaceably in what I just read somewhere else is truly a convivium, a much nicer word than similar greek terms too bound to the kind of partying restricted to the wealthy (symposium comes to mind).

These lyrics, Alvaro proposes, have deep roots; and I respond they probably always existed. He suggests the couplet quoted above was sung spontaneously by a farm woman. Perhaps: man or woman, the singer was probably out in the fields, and probably had that hillock, or those hillocks, the real one and the metaphorical, in view.

Borrowing a bit from linguistics, there are basically two ways of creating novelty: the first is to create new, never-before-uttered expressions that are, nevertheless, entirely competent expressions within the received language, its lexicon, and its rules; the second is to create expressions which are, under the terms of of the received language, non-competent, if not impossible. The choice is between saying something which simply has not been said and heard before and saying something which was heretofore impossible to say or hear. The histories of repertoire in music, art, poetry, etc. are marked by a certain oscillation between the two.

and I've been thinking about that, too; it's one of the traps that I fall into all the time, not that it matters except that when you're in a trap you (by which I mean I) don't get any work done.

(And that's just one of the divides; let's not even think about the one between both the musics Daniel mentions and the greater body of music which doesn't concern itself at all with "creating novelty," but is perfectly willing to go on endlessly repeating the past.)

Some time ago I opened a lecture, ostensibly a reading of Wallace Stevens,

I am committed to two notions often thought to be mutually exclusive: regionalism and modernism.

which is of course another idiotic dialectical trap (the lecture was an escape from it: it's in my book , even recent cultural history, commas included in the title, book available at Frog Peak Press, please order a copy).

Clearly the singer of that lyric about the hillock was a regionalist, not a modernist; modernists don't work in the fields. We'd all hoped postmodernism would get us past these distinctions, or to be a little more precise get us past the fences around such distinctions; would at least build little stiles permitting field-hands to hop across into libraries, and scholars to find their way back to the fields.

Well, as Alvaro promises in that title, floating over his oddly attractive Spanish Woman (for, yes, he's a painter, too, a gifted one), Spring has come, postmodernism arrived not without its own problematic wars but we've most of us weathered them, and can now find "novelty" in musics and poems and paintings and even examples of scholarship which might once have seemed, well, Quiescent.

I spent a couple of hours yesterday digitizing old tapes, and made a CD for myself of the result. It includes:

twenty-two minutes long, spare and unpredictable, full of the kind of ambiguity Wolf discussed in a paragraph noted below (Aug. 28), the once-seeming-important distinctions of surface and depth so fully resolved as to be rendered not only meaningless but incomprehensible. I listen to it now, wondering what that last piece is, and who discovered the sounds and wrote something out to allow others to hear them.

The four pieces make a completely satisfying CD. Its sounds emerge from a collection begun over forty years ago, and last visited nearly twenty: but the sounds clearly engraved themselves into some part of my person, setting synapses so strong as to snap back at the least encouragement. Are these too traps from which to emerge? Or fences whose divisions must be overcome?

Do these sounds sing quietly and insidiously like the remembered (consciously or not) songs that have floated around in Spain since the days of the Iberians, songs that wind up in, among other places, music like Joaquín Rodrigo's Cuatro madrigales amatorios? That piece delighted me long ago when I discovered it among the commissioning series put out by the Louisville Orchestra; it proved that those ancient lyrics could find fresh expression and material even then, fifty years ago, in the heart of Modernism.

De los alamos vengo, madre...
I hear those lines so often, looking across my own fields toward my own young poplar.

And to close once again with Alvaro's translation:

Hawk, you that fly with the night,
is it windy?

Going back some forty years, I always valued the fact that you could comfortably occupy the aesthetic worlds of both the traditional and the avant-garde. For me, the distinction is simply between those who identify with society closely enough to speak its accepted language, and those who feel the need to establish an alternative social structure with its own distinctive tongue. "Speaking in tongues" has a long history.

But there is also language which presents a barrier that is designed to be surmounted in order to achieve a level of communication that could not take place without the effort: a code which is intended to be broken.