SCREEN WAS AMONG my first and remains, I think, my most successful “graphic” score: notation which relies completely on drawn elements, rather than conventional musican notation. It was one in a number of “quartets” conceived as a series of experimental pieces investigating the concept of string-quartet playing, not as the playing of stringed instruments, or even the interpretation of that marvelous repertory of music from Haydn down through Lutoslawski, but as the act of listening to others and one’s self, playing in the moment while considering the long span, hearing and being in several places simultaneously, focussing consciously while leaving the intuitively expressive gesture free. 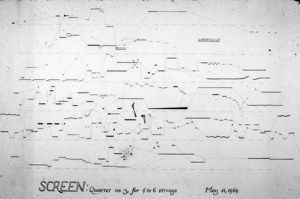 The instrumentalists can play from left to right or from right to left; when any system is completed, they pause or do not before beginning any other. The performance begins and ends as seems right.

Screen is intended as a sound-curtain through which something else might be heard — another composition or two, or ambient sounds, or internal songs. Screen should therefore not be too insistant. It should be fairly slow and quiet. Not too much needs to be made to happen. It is unassertive, like any linear statement. It is cool, a little formal, rather conservative, but not plain or cold. The several systems can be played forward or backward, each taking about a minute. I prefer Screen played by three to six instruments, weighted more toward violas than violins, including contrabasses too if possible. (I would like to hear it performed by a capella chorus one day, or by an ensemble of trombones.) 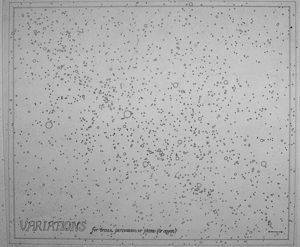 Variations was composed six years later, in 1975, again a graphic score, this time based on a star map that had been used on a poster advertising an exhibition at the Oakland Art Museum. Here again I relied on an intuitively pleasing visual appearance to guide me to a pleasing sonic resolution; this time the size of the circles indicated loudness; the placement on the page indicated pitch; and since I was thinking of nonsustaining instruments like harp and percussion there was no reason to extend the lines to indicate duration.

I'm sorry the scores do not reproduce better here. You can hear Variations played on the harp, superimposed on a performance of Screen by a string quartet, here, as recorded in a live concert thirty-two years ago in San Francisco.