YOU CAN DRIVE from Los Angeles — well, Glendale, next thing — to Berkeley in nine hours and still take in the Carrizo Plain. I shouldn't tell you this. One of the great attractions of the Carrizo Plain is its emptiness: if all subscribers to The Eastside View decide to drive there next weekend there'll be a traffic jam. 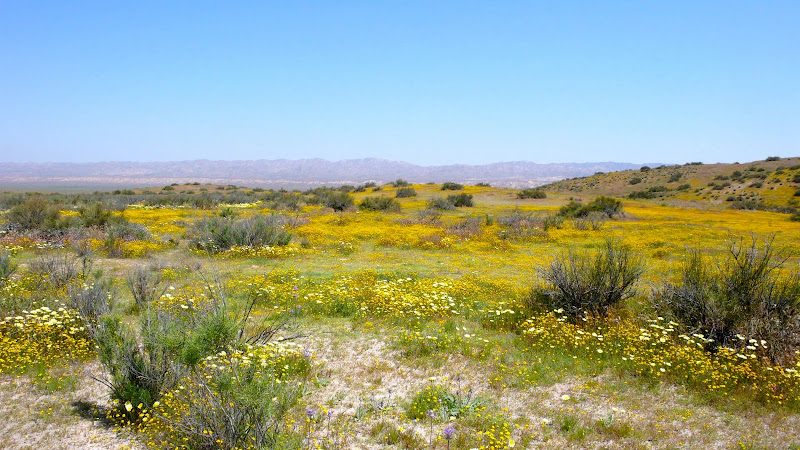 I've put a web gallery of photos up here; in the meantime you can make do with this shot — click on it and I think you'll get a bigger version. We were there perhaps a week too late for the peak of the wildflowers, but what we saw was well worth the drive.

We took the road south to north, driving up to the first ramp off Highway 5 north of the split from 99, then the long dreary road to Mariposa Maricopa, then on twelve miles through amazing country to the an abandoned gas station at a junction. There you turn north on Soda Lake Road, driving twelve or fifteen miles on unpaved road, through dry cattle ranches, miles of beautiful empty wide valley between low hills, finally coming to the federally protected National Monument lands.

We first drove through here quite a number of years ago, from north to south that time, also looking for wildflowers. Seems to me that was the time we caught them at their peak: the west-facing slopes of the hills above the San Andreas Fault, along the east side of the valley, looked like a Persian carpet of lavenders, roses, reds, yellows, and blues. What you see in the photo above is only a hint of what can happen here in exceptional years.

We took our time but covered the ground, driving 35 or 40 miles an hour up the road, stopping at the observation point on a low hill west of the road. We continued past the ghost town — actually the never developed town — of California Valley; then west on Highway 58 and up Shelby and O'DOnovan Roads toward Creston, and up Creston Road into Paso Robles where we joined 101 for the drive up to Berkeley. I'd never taken thoset 58-Paso Robles roads before; it's a beautiful drive, first through more empty wildflower country, then through vineyards, finally the unfortunate suburbs. Well, folks have to live somewhere, I guess. I'm glad they don't live on the Carrizo Plain.
Posted by Charles Shere at 12:11 AM

In a casual sense, we're always living in the "last time" since the present is always at the end of time. In another sense, our destruction of the land does indeed sometimes make it seem we're the "last ones" to see it "as it was" before the white man came to ruin it. The "new world."

We're still old enough to remember what California was like before the rapid expansions which began in the 1950's. I suppose for older people, that expansion may have seemed to have started much earlier. Whenever I drive around the state, I am always saddened. Another overpass being developed so another group of housing tracts can be dug into the hillsides. Signs up: "Available."