PROBABLY BECAUSE MY FIRST hands-on experience with music was in my high school band, where I concentrated on bassoon but learned most other woodwinds (and French horn and tuba), I've always loved orchestration. The art of assigning musical material to musical instruments, most often in combinations, with an eye (ear) for fresh, surprising, or (best of all) absolutely appropriate sound, given the pitch and the moment, the loudness, the context.

And so I was early drawn to the Russian masters. Rimsky-Korsakov is of course the locus classicus of Russian orchestration (or instrumentation, the other word used for the art). His predecessor was a Frenchman, Hector Berlioz, truly a genius; Rimsky leans on him heavily. But it was Rimsky who transmitted Berlioz's 19th-century genius for the art and science of combining musical sounds — instrumental sounds — on to the twentieth century, first and most notably to Stravinsky, but also to Debussy (who traveled and worked in Russia, if memory serves) and Ravel.

What is (or was) it about the Russian temperament that made orchestration — which depends so heavily on wind instruments and percussion — so congenial? I don't know, of course; I'm sure a cultural historian somewhere does, but I don't. I'm merely asking. 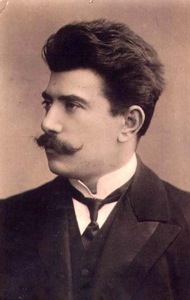 ﻿In any case I love them, those Russian wind-heavy composers. Much — too much — of my musical education (like all the rest of my education) is, or was, simply accidental; much of it arrived through second-hand recordings (all I could afford at the time, but with the added advantage of being frequently out of print, or somehow odd). There was a used-record store on Ninth Street in San Francisco that I patronized heavily. Among the bins there was a statistically unlikely number of eastern-European items, probably because the copyright and licensing laws in those days didn't extend across the Iron Curtain: and I found there such things as Glazunov's Fourth Symphony, in the wonderful recording by Jaques Rachmilovich with the Orchestra of the Accademia Santa Cecilia; and — what prompts me to writing tonight — Reinhold Gliere's Third Symphony, "Ilya Mouromets." Seventy-nine minutes, or thereabouts, of striving French horns, trilling flutes and piccolos, thundering kettledrums, glorious trumpets.

Gliere as a young man

This Russian music obviously descends from a German source, and I'm a little embarrassed to acknowledge it. I loathe Wagner's music: too long, big, strenuous, sensuous, slippery. But Gliere spent a lot of time in Siegfried's forest, listening to those murmurs, and he learned a lot there. He learned from Mahler, too: narrative drama above all. And he brought those influences to the fundamental Russian artistic drive of his time, the twenty or thirty years before the Revolution (though he lived many years after): the drive to declare independence from Europe, to portray (or, better, declare) Russia, its scale, its centrality between Europe and Asia, its complex of cultural and ethnic sources. And, in this Third Symphony, its mythos.

There's something about summer, too, that makes me yearn to hear this music. There are other summer musics: I think of Gottschalk's liereNight in the Tropics, for example, another exotic programmatic symphony. Late at night, the Chopin nocturnes. Berlioz's Nuits d'Eté, of course; and most Ravel. But especially the Russians: Borodin, Glazunov, and this Gliere.

I think I actually heard "Ilya Mouromets" live once, but I'm not sure. Talk about embarrassment! How could I be unsure of that? If I did, it was with Harold Farberman conducting the Oakland Symphony, many years ago. He cut the piece, of course; most conductors do. (He cut "Night in the Tropics," too, even less forgivable.) I think my first hearing of the piece, though, was via a recording by the Philadelphia Orchestra, Leopold Stokowski conducting. It too was cut.

Today when I got to thinking about the piece I looked online, first in the iTunes store, then at Emusic.com, which I'd forgotten to resubscribe to on return from the most recent trip. Just before leaving, two months ago nearly, I downloaded there the last music I wrote about here, Ippolitov-Ivanov's "Caucasian Sketches" (another piece of Russian orchestration-heavy kitsch). I was surprised and gratified to find four or five different recordings of "Ilya Mouromets," most apparently uncut (since they ran 75 minutes long or so).

I listened to samples of all of them, and chose Donald Johanos's recording, with the Czech-Slovak Radio Orchestra, mostly because of the fine contrabassoon solo at the beginning of the second movement — the other recordings, by Russian orchestras, double contrabassoon with tubas, dubious orchestration to my way of thinking.﻿

I touched briefly on the question of orchestration in my recent blog on Maurice Jarre, the French movie music composer and conductor.

Full orchestral instrumentation requires a knowledge of the range and pitch of all the instruments in an orchestra, and of how that possible range of various effects can be marshaled into a unified sound. Rimsky is always cited as a master of this, though there are precious few recordings of his work by which to verify this judgment.

I love all the Russian composers from the period 1860 to 1915. Mussorgsky, Balakirev, Rimsky, Tchaikovsky, Borodin, Liadov. There's a miraculous recording of Gary Graffman playing Balakirev's Islamey, a piece almost no one knows about any more.

Debussy's La Mer, for me, comes right out of Scherezade's mixture of colors and moods. And then comes Stravinsky's Firebird. Have we lost that tradition today?

There's a lot to be said about orchestration, though the general principle is simple enough: and your second sentence states it very well. The first thing any composer should do is familiarize himself with any and all instruments he's interested in composing for. Alas, the means by which I managed to do that — a small rural high school band, complete with alto clarinets, English horns, euphoniums, the full range of saxophones, and even cello and string bass (though no shoulder-stringed instruments, alas) — that's pretty much a thing of the past.

Yes, I think we're in danger of losing the tradition today; many contemporary composers of orchestral music produce scores that sound as if worked over at a synthesizer, as César Franck's orchestration always sounds of the pipe organ. Increasingly, instrumentalists adapt to composers, rather than composers writing for instruments. This isn't necessarily a bad thing, but it sure is a different thing.