rue des Petits Ecuries, Paris, June 10, 2010—
SO MUCH WRITTEN (so much ephemera) so quickly; then so long a hiatus. From Enna we descended to the north coast, touching Cefalù long enough to admire the coastline, dodge the tourists, and grab a bite of lunch; then checked into a little hotel a few miles east for the night. (In a few days I'll post a list of all the hotels for this trip; many were quite nice.)

Then we drove inland, across the mountains, skirting Etna, always sullen under covered skies, and dropped into busy Taormina, a solid traffic jam threading a crowded street climbing from the sea into the hills — where we turned around, crawled back downhill, and got the hell out of town.

We drove on to Messina, which I'd always thought would be busy, urban, and dull, much like Catania; but which turned out to look promising and promisingly easy in its style, fairly quiet, broad-streeted; and then we took the ferry across her famous Straits and began the long drive north.

What a trip! Nearly 1400 kilometers (850 miles), as far as San Diego to Grants Pass; even without Sicily Italy's as long as California and Oregon combined. We did the trip in eight days, stopping for the night in Mileto, Caserta (where we picked up our granddaughter Francesca), San Gimignano, Reggio Emiglia, Milan (two nights), and outside Asti, finally turning in our car in Torino and taking the train to Paris.

What a trip! We introduced Francesca to Hadrian's Villa in Tivoli, the cathedrals in Orvieto, San Gimignano, Firenze, and Parma (also the Baptistery, of course, and the amazing Farnese theater); we spent a day with Fran's father in Milan and another day with Dominique and Chuck at our friends the Rampis in their agriturismo; we enjoyed Italy's endlessly varied landscapes and her city's sidewalk pleasures. It's an absurd way of traveling, of course, particularly once you've spent a month walking from place to place: but it's left many impressions.

None to be dealt with here. We've spent the last four days in Paris with another couple of friends, Hans and Anneke, in a curious apartment rented blind on the Internet, on a small street in the 10th arrondissement, a part of Paris I know not at all. (In the past we've always stayed on the left bank.)

Sharing our stay with friends, we temper our own enthusiasms. I haven't done all my usual Paris things: haven't looked in at St. Medard, checked the old tree at St. Julien le Pauvre, visited the Place Georges Pompidou or (more grievous oversight) the Place Dauphine, eaten at L'Ecurie. Some of those oversights will be corrected later today, I hope.

What we have done is walk a hell of a lot, as one always does here, and take a few Metro trips, which I find even more fatiguing for the noise and crowds. It's been fascinating to contrast Paris with Milan, and one day soon I hope to expound on that, and see where that leads me: the quick impression is that Italy continues to present the more gratifying daily street life, however richer Paris's intellectual and cultural offerings may be.

Life in the apartment is interesting, too. It's nearly eight in the morning; I sit at the kitchen window on the fourth floor overlooking the central court; it rained in the night and is damp and cool (thankfully); the soft clouded day stifles noises, though water is running in the pipes, I notice, and a sparrow's chirping away somewhere, and a crow calls.

From time to time you're aware of neighbors, who stand at windows where the reception's better, discussing business or social affairs, waving one hand while holding cell phones to their ears. One's aware, too, in this apartment, of the fascinatingly compulsive, sensual, private, thing-oriented life so often celebrated by fictional accounts of Paris: Balzac, Maupassant, Proust, Ponge, Perec, Patrick Susskind. 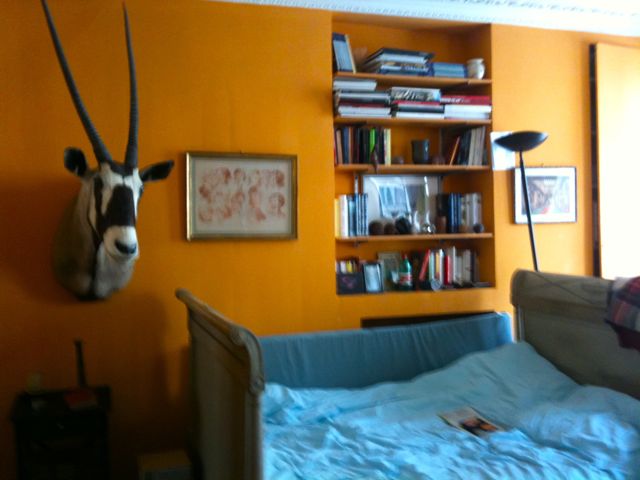 Our apartment is furnished from the flea market, with heads of gazelles looking out over the rooms, antlers serving as hat-racks, a mannequin's leg emerging from the fireplace, improbably couches, chairs, footstools, side tables, and lamps. There are books everywhere, and magazines; the owner apparently simply moves in with a friend for a few days, leaving most of his things lying scattered about, when he wants to earn a few extra euros by accommodating the likes of us.

The human animal continues to fascinate us, whether the invisible owner of this apartment or the Africans and Turks in our quartier, friends seen every few years in Europe or grandchildren, cooks or cab-drivers. The Seine flows tranquilly on. The grain of life is incredibly fine. We're crowded by contemplation.Photos:

Syracuse, including the Hippolytus photos: gallery.me.com/cshere#100299﻿

As always, our meals are recorded at Eating Every Day
Posted by Charles Shere at 11:33 PM

Your heads must be full to the brim (hmm...is the brim of a head close to the brim of a hat, because then it wouldn't be very full...but you see what I mean), with plenty to think about and tell tales of for months and months. I look forward to hearing them!

sofe said...
This comment has been removed by a blog administrator.
12:49 PM