Rio della Crea, Venice, May 23, 2011—
AN EASY FLIGHT on EasyJet from London across the dramatic Alps, a gentle descent to Marco Polo airport. It's always a little exciting to land at a new small airport. This one was simple enough: the baggage fairly quick to arrive, a simple passport control, no customs interview. Fabiano's father was there holding a sheet of paper with my name on it.

Fabiano's the agent for our apartment, which is in a new building near San Giobbo, in the Cannaregio. Ours is pehaps not the most convenient location; it's a five-minute walk to the Canale Grande with its vaporetti and, more important for us, the main (pedestrian) street to other parts of town. But it's quiet here, the apartment's well equipped, one can relax, read, and perhaps write a little.

Fabiano's father speaks French, German, and of course Italian. He's a drummer, it turns out; he's spent years playing in a small jazz combo in Germany and England — but he doesn't speak English: at least, not to us. He drives efficiently through the glorious sunset, rays of sunlight mounting behind towering clouds.

At Piazzale Roma he parks, illegally and a little nervously, and we make a few phone calls on his telefonino to find out where Francesca is. Surely she's at the bridge, I think, and on one occasion even say; no, says Fabiano's father, she'll meet us here. Finally Fabiano's wife arrives, speaking English: she's over there, she says, at the bridge.

The bridge surprises me, even shocks me a little. It's a new one, at least to me; a Calatrava bridge, a broad rather low arch with glass treads, spanning the Grand Canal to lead people to Benneton. Fabiano's father explains: there may be four thousand, five thousand people on that cruise ship; they all get on the People Mover, arrive at the Ponte Calatrava, and go to Benneton, where they buy things; then they cross the Calatrava, get on the People Mover, and go back in the ship.

Yesterday, our first full day, we spent walking and getting lost in the Dorsoduro, a sestiere (an arrondissement, a borough) I hardly know. We were going for Sunday dinner to Montin, a place I've always loved. Venice is famous for confusing its pedestrians, of course. Maps are increasingly useless as one's eyesight continues to decline: the streets go every which way, and so do the printed street names when they are present, and in any case the names may be printed on the map but they're rarely to be found on the streets themselves.

What are streets anyway, in this wonderful city of no vehicular traffic? Some, like the Strada Nuova, could well sustain two lanes of cars and trucks, with sidewalks on each side — but how would cars and trucks get to it? Every few hundred meters you'd need another drawbridge. And then: would the street bear the weight of such traffic? Many of these “streets” are rii terà, former canals roofed over or filled in.

The streets are narrow for the most part. Tourists are cautioned not to walk two abreast and certainly not arm-in-arm: but of course they do. And they stop without signalling, or lollygag along. They stop at the tops of bridges to take photos each way down the canals. They even sit on steps when they want to, the steps of the many bridges I mean: someone should tell them only beggars are allowed to sit on bridge-steps, beggars in black, perhaps exposing wounded legs or arthritically crippled hands to excite sympathy.

It's hard to be sympathetic for the tourists. It helps to recall one's a tourist oneself. Most of the locals — waiters, sales clerks, even residents — are pleasant and patient. I always begin a request in Italian, and try to remember to begin with Buon giorno, and not to smile: it's the Americans who are always grinning like apes. We dress modestly, too, of course: not everyone does. Yesterday near Santa Maria Gloriosa dei Frari we saw a young woman standing near a low stone wall, one foot in her companion's lap: he was examining a toe, I suppose for a blister. Her skirt was improbably short and sheer; not much was left to the imagination. I wondered if they'd try to enter the basilica when the pedal inspection was finished, but we did't wait around to see.

Montin was just as remembered: I wrote about it over at Eating Every Day. This used to be thought one of Venice's best restaurants, but it has declined in the sweepstakes, partly because its cuisine has been shouldered aside by trendier stuff, partly because the public's taste has evolved even for its own old-fashioned cuisine, which is neither fashionable nor casalinga (home-style); it's simply the familiar Veneto restaurant fare of fifty years ago. But that's a comfortable, nourishing approach, I think, and one comes to appreciate its dependability. You sense it's a family-run establishment, with the older generation managing things, the next waiting tables, and a third allowed — in the indulgent Italian way — to watch and participate a little, eventually to take its own place in the parade. A six-year-old girl brought us a basket of bread, set it down with a smile, then clasped her hands behind her back exactly like Degas' petite danseuse de quatorze ans, posed just a few seconds, and gravely walked away. Later we saw her deliver a plate of sliced tomatoes to the next table; and later we noticed a woman of thirty or so moving among the tables, her hands clasped behind her back. 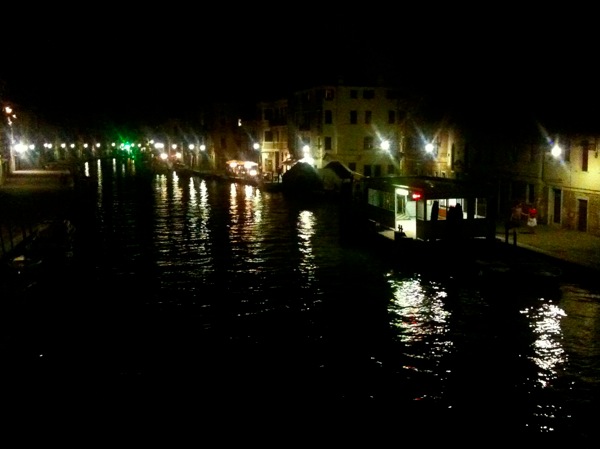 Each night so far — there have been two — we've taken a walk about our quarter, at eleven o'clock or so, to enjoy the balmy air, the dark sky, the lapping of the dark water in our Canale di Cannaregio. Last night at eleven o'clock we wanted ice cream, and realized we were near one of the most highly recommended gelaterie here, da Nini. Alas, it closes at nine. Next door was a restaurant: a handsome young waiter invited us to have ice cream in his giardino— in fact, a table on the street. We discussed it for a moment, then decided What The Hell, our frequent philosophy when in Italy.

I'm confused, he said to me; you speak italian, she (indicating Lindsey) speaks English, she (Francesca) is Italian. Fran explained, but the waiter looked more into her eyes than attended to her explanation. Che bei occhi, he said, you can't be from Napoli, you must leave Venice. We sat down for gelati: lemon for me, vanilla for L., both for F. At a nearby table three loutish young men were shouting at one another in low, bad, and broken English; impossible to tell their nationality, though one had a strong Spanish accent. So loud and profane, not to say vulgar, were they, that other parties left early, or did not stay at all to be waited on.

Today F. and I were out doing errands and spoke to our waiter again. Yes, they are terrible, he said; they send customers away; the other day one of them even put his hand up a woman's leg, a woman he did not know. Che bei occhi, he continued, looking into Fran's eyes.

• Online photos from Venice this month
Posted by Charles Shere at 5:27 AM