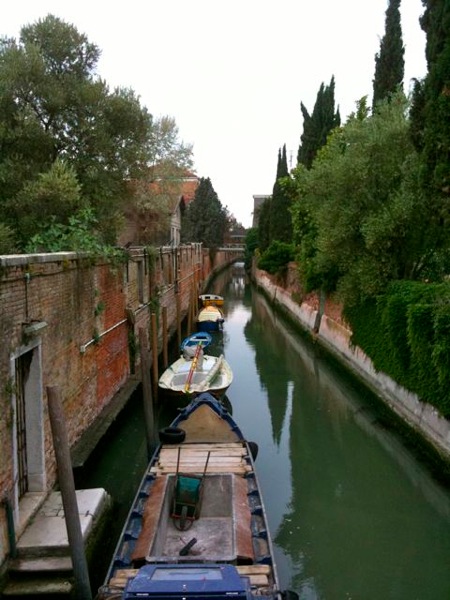 BECAUSE OF WRESTLING with Italian, French is momentarily away from my brain, and I can't recall the art-talk for the painter's device for connecting foreground to background in his painting. Is it simply passarelle? Don't know; don't remember; doesn't matter.

It is of course one of the things that attracts me to these views down canals from bridges. Venice, being built on hundreds of little islands, all separated by canals of various widths, has a lot of bridges. We're standing on one here, hard by the Oratorio San Giobbo, on the penultimate northwest island of the Cannaregio. I've gone out for a short walk, but I'm headed for home, as it's beginning to rain. Perhaps you can sense, from the photo — not a very good one, I'm afraid — that the sky is heavy and overcast; there's not a breeze to be felt.

Most canal-bridge photos from this town feature buildings; many feature people. I tend not to take pictures of people. After an early trip to Europe, back in the 35mm slide-show days, I bored a few friends with an evening of photodocumentation; at the end, one friend asked: But, Charles, are there no people in Europe? Well, yes, there are; but in those days I felt it improper to photograph strangers. Now, of course, cameras are everywhere and there is no privacy in public (why should there be, anyhow?). I'm less hesitant to take a general shot with people in it, but I still don't like focussing in on an individual.

And in any case the function, or one function at least, of the still photo is to freeze a moment. We could be standing on this bridge, looking up this canal, now, or ten years from now, or forty years ago. The idea of permanence lends such photos their attraction, I think; it is what extends simple viewing into contemplation. 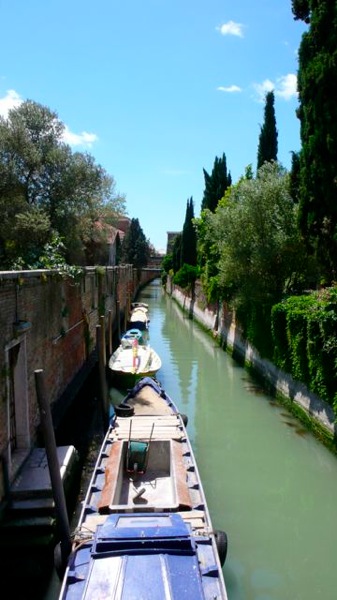 This morning — Saturday, now, the 28th — we were back on the same bridge, on a nice sunny day, with a little breeze. The eye clearly saw what the photo does not reveal: at the distant end of the canal, the tiny white speck is not another cloud but an enormous cruise ship.

We rarely see anything like this: we saw one when we arrived, but have been back to that part of town only once since, apparently between stops. Just as well.

I mentioned the other day chancing upon the hotel we stayed in for a couple of days thirty years ago, Dalla Mora. Yesterday we visited the quarter we stayed in for a month, ten years ago, when we rented an apartment with another couple, and were joined by two granddaughters. That trip was before digital photography, or at least before I'd embraced it, and though we took a number of photographs, mostly as transparencies, I haven't taken the time to look for them — so we took a few today, finding the area looked virtually unchanged.

That apartment, like the one we're in now, is off the tourist track. Closer, though: only a few turned corners, only a couple of bridges, and you're on the Strada Nova. (Venetian tends to drop the “u” from words like nuova.) As I've mentioned, the only notes left from that sojourn are those concerned with eating; you can see a comparison of eating notes over at Eating Every Day if you like. We're less enthusiastic about the restaurants this time, so far, and more careful to collect facts about them — partly because I never dreamed how enthusiastic readers would be about these eating-notes, so never really realized how responsible I should take this exercise in journalism.

Cameras and foot-traffic may slow things down, but things do change; and among them restaurants. People retire, or get lazy, or find more profitable ways to do things, or give in to trends or expectations. At the same time, of course, our own experience has grown by ten years; our tastes change — they've evolved toward a simpler cuisine, and at the same time my own sense of taste seems to have heightened; I'm more aware of chemicals, and of changes brought by aging (in the food, not in me).

At the same time, of course, restaurants have got a lot more expensive. I don't fault them: I haven't once felt exploited. Fish is expensive, because there's less of it, and more people who want to eat it. But we seem to be eating in house more often this time, usually simply sandwiches and salads — mortadella and prosciutto are so good here, and relatively inexpensive; and the arugula and lettuces are very fresh and tasty. And the Prosecco spento — still, not sparkling — is a little less than €2 for a liter and a half, cheaper than water. So we make do. 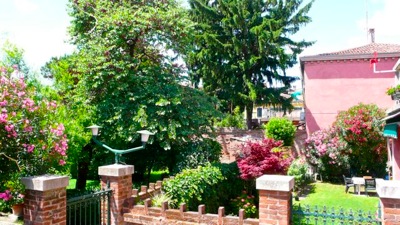 Let me leave you with one last photo today: the garden behind a wall, seen from the same bridge from which we looked down that canal at the beginning of this post. I think of our quarter as workingclass, and have so described it earlier: but this garden suggests a certain degree of comfort, don't you think? You just never know what might lie behind all these brick walls…

• Online photos from Venice this month
Posted by Charles Shere at 1:58 PM