We first saw it the day after we arrived, a couple of weeks ago. A tribute to Albrecht Dürer, I think it may have been, and perhaps the only mural we've seen in this town. I took a photo and posted it to Facebook; my friend John Whiting then worked on the photo a bit, removing the fire hydrant from in front of it. 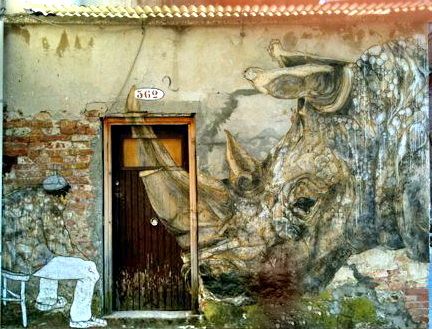 It was on the north-east facing wall of a shed, exactly at 45.44480N, 122.32148E, a little southeast of the Ponte Tre Archi, off the west fondamenta of the Canale di Cannaregio. Close examination suggested it was painted on paper; parts of it were peeling away. (You can see this on the shed door, just below its boarded-up window, where a flap of paint or paper is detached and curling toward the viewer.)

As we walked past the shed a few days after we'd first seen it, a man in an apron was walking away from it, supplies of some kind in is hand, toward the restaurant a few steps away: Pizzeria-Ristorante Tre Archi. I asked about the painting. He confirmed that it was painted on paper which was then affixed somehow to the wall, and indicated that due ragazzi, two youths, had come by a month or so earlier, asked permission to glue the painted paper to the wall, and were told to go ahead.

What ragazzi, I asked; he only shrugged: two youths whatever. I suppose that's a self-portrait of one of them, sitting on the chair wearing what looks like a plumber's helper on his head.

Yesterday, maybe the day before, we were astonished to see that the seated figure was missing. We looked fairly closely and decided someone must have taken it deliberately. I don't know why we so quickly put this out of our minds; perhaps it was just one more visual detail lost in the daily richness of this city. 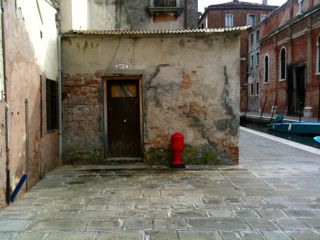 Today we noticed the rest of the mural was gone. The only thing left is the section of horn on the plywood boarding up the door of the shed. I asked at Tre Archi what had happened. The rain, they said, had finally dissolved it, or at least the glue holding it to the wall; I imagine someone somewhere managed to peel off extensive sections. I like to hope it was the artists themselves.

It's frequently said that art changes the way we view reality, and I'll certainly never look down the Fondamenta de la Crea at that shed without seeing the rhinoceros. The shed is nude without it.

Whoever the artists were, they were certainly talented. It's too bad their work wasn't more permanent, I suppose: but on the whole it's better for public art to be good but fleeting than bad and persistent. Like the Bellini, the rhinoceros stays in mind. I'm glad we had a chnace to see it.

Across the narrow Rio de la Crea from the shed there's an apartment building. On its front door, a poignant note advertising the loss of Titi, a pet cat. Perhaps the rhinoceros frightened it and it ran away; perhaps now the rhino's gone Titi will come home. I hope so. Most losses are merely Redistribution and can be got over, but the loss of a cat is a serious matter.
Posted by Charles Shere at 9:39 AM