Treppo Carnica, June 4, 2011—
IT DOESN'T REALLY MATTER where in this world we go (though of course we're relatively choosy about what parts we visit), we find places worth spending much more time in. Carnica is one. Italy is divided into states, I forget what they're called in Italian: one of them is Friuli-Venezia-Giuliana. (That's already really three regions, I suppose, jammed for some politically convenient reason into one.)

Friuli-Venezia-Giuliana, the northeastmost region of Italy, is divided itself into a number of provinces, of which Udine is one, named after its capital city. And the province of Udine is divided into four sections — perhaps not politically; I'm not sure about that: but because of history and geography, these sections have a certain individuality.

One of those sections is Carnia, where we are. Its principal city is I suppose Tolmezzo. We went there today to visit the folk museum, but were unsuccessful: though we did have a nice coffee and a fine gelato, and made a successful ATM withdrawal, all well worth our time.

The quarters of Udine province are divided by ridges and rivers. The riverbeds suggest the rivers can run pretty destructively, and there aren't that many bridges over them. The ridges rise to pretty high passes, and the roads crossing them are slow. (Yesterday we counted a dozen hairpins on one such road, seven on another; and of course there are tunnels, retaining walls, snowsheds and the like to maintain.)

How surprising it was, then, that in the small town of Paularo, a few kilometers east of our temporary home in Treppo Carnico, there should be a museum of musical instruments: three floors of beautifully restored instruments, keyboards for the most part, apparently in homage to Mozart. 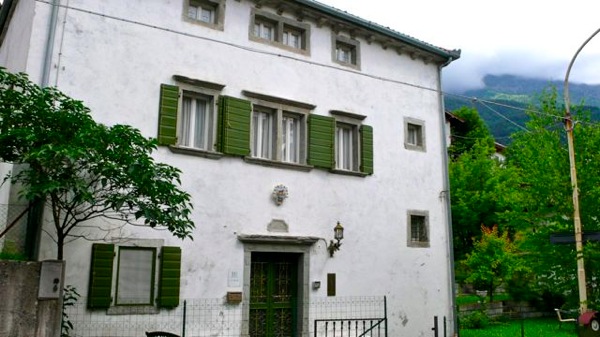 Not sure exactly where it was, we asked at a bookstore on the town's main street. A woman there looked it up on their computer, then wrote out a phone number for me. The man who answered referred me to another number: when I called it, the man who answered asked how many we were, then suggested we come at 11:30, about forty-five minutes away. We walked around town a bit, bought some groceries for our lunch, then stopped at the Mozartina, where we saw a young man in a track suit unlock the front door, close it behind him, and one by one crack open windows and turn lights on and off, up and down the three-story façade.

Finally he seemed to be done, and L. peeked into the front door: Attendere un momento, he called, Wait a minute, I'm not yet ready, and we retreated to the front yard, sitting a while on benches flanking the door.

Then he came to the door and graciously let us in. He explained, pretty much by rote, that this was a private museum, that he would guide us through it, at the cost — he seemed a little embarrassed about this — of five euros each. Then he motioned us to follow into the first room, where I was rather amazed.

The first instrument to catch my eye was a one-manual organ from the 17th century, nicely restored, the only modernization being electrically-operated bellows (very quiet, by the way), with original lead and wooden pipes. He played a short Handel prelude on this, not too badly, and explained the construction and tuning, responding well to what questions my primitive Italian allowed me to put.

From there we went on to fortepianos, harpsichords, early pianos, harmoniums, all restored with as much attention to their musical utility as their physical appearance, which was very beautiful. The instruments are displayed in rooms otherwise furnished according to both period — 18th and early 19th century — and place: this little corner of a mountainous region of what was once a backwater of the Austro-Hungarian Empire.

Mozart, our guide told us, had actually visited this town on one of his travels; had actually played the glockenspiel we found in its shallow case, resting on a piano in the top-floor drawing room. (Our guide picked up a couple of little hammers and had his way with a passage from The Magic Flute.)

All these instruments were gathered and restored by one Giovanni Canciani, a native as I understood it of Paularo. The house itself is from 1745; its restoration dates from just after the 1976 earthquake which caused a great deal of destruction in Udine province. 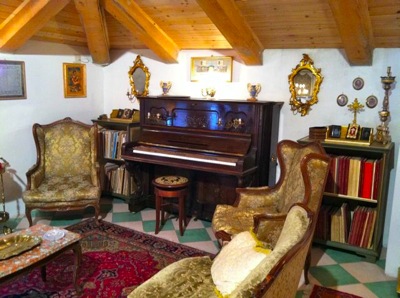 The roof, for example, is new, including its beams: but built after the original methods. The attic room is used, I read, for private concerts from time to time, and while the entire house-museum is privately owned, tours like the one we took are available by appointment.

In one room portraits of Canciani's grandparents hang, father's side on one wall, mother's on the opposite; flanking each portrait are portraits of the previous generation. There's something remarkably touching about all this, a feeling that one actually does look back into an intimate past, in a comfortable but not ostentatious home in an odd corner of an old world, one even including an occasional visit from a Mozart.I mentioned yesterday, either here or on the eating blog, our hostess-cook-waitress reminding us that simple things are best. We're staying in an albergo, a country hotel, which is also an agriturismo, a place connected to, making use of, and seeking to acquaint the tourist with a fattoria or farm, preferably a smallholding, which maintains traditional agricultural and domestic values in some way.

All this is done with government support of various kinds. Certainly licensing and a degree of publicity; perhaps some financial support in the form of tax breaks or maybe outright subsidies — these things are complicated enough in any country, perhaps especially here in Italy. We learned last year, for example, when we stayed a couple of nights in a similar place in Piemonte, that the evening menus were actually stipulated by a regional tourist bureau: traditional dishes of the area, their roots in peasant cooking, dishes rarely met in commercial restaurants.

That may well be the case here, as the two dinners we've had so far were composed almost completely of such dishes. We've only seen such dishes in one restaurant before: oddly, in Pasadena, where they're the mainstay of Tre Venezie, whose name refers to the three regions in the Italian northeast: Alto Adige, Veneto, and Friuli-Venezia-Giulia, and whose menu is drawn from peasant cuisine de terroir.

This afternoon we walked ten minutes or so through town from our albergo to its farm, on the edge of Treppo. The main building is a barn dating from 1745 — the date's carved into the keystone over the door. Here, unlike the Mozartina, the roofbeams are the original poles, larch or spruce. The floors have been replaced, the ground floor covered with a thin layer of concrete; and the hay inside is neatly baled in cylinders. 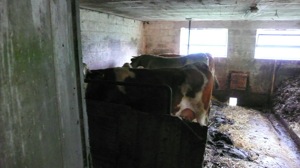 Four cows live in a stall in the basement, alas never allowed outside to pasture, but apparently content and certainly healthy. We drink their milk — pasteurized, of course; it's required — with our morning coffee, and it's sweet. Outside, 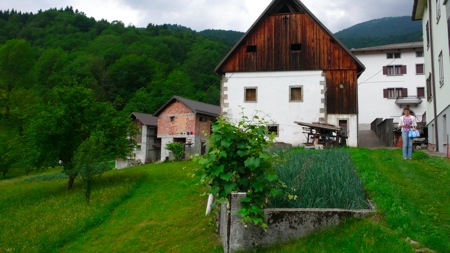 vegetable plots — potatoes, pole beans, salad, leeks, onions — divide the space with fruit trees and, especially, grassland, which is cut several times a season for hay. A couple of men looked in on us, whether asked to by our host, or out of neighborly curiosity, I can't say. They told me that this was the way of life hereabouts until the 1950s, when the old ways were permanently abandoned by the younger generations.

Today the ways of the paisano are continued only artificially, I suppose, as a part of the agritultural-tourism industry which is becoming a significant part of the Italian economy. I can't help thinking, though, that when the good times are gone, when people are forced back to old ways, whether from war, climate change, or terminal economic meltdown, the old ways will re-emerge; they will provide the only sustainable survival. And I'm glad to see the scythes and pitchforks are maintained in good working order, alongside the walk-behind mower and hay-baler.
Posted by Charles Shere at 10:40 AM